« A Snippet: Who Invented Agriculture, the Ants or the Bees? | Main | Talmudic Question #128 »

Symbiont Exchange in the Lab

What's possible in the wild – symbiont exchange, see last week's Part 1. – should also be possible to achieve in the lab. Less for competing with nature's ingenuity but more with the aim to study the separate contributions of symbiotic partners, of course. So, after being successful earlier in transferring secondary, facultative (=non-obligate) endosymbionts between aphid hosts, the Moran lab developed a procedure to exchange the obligate Buchnera aphidicola endosymbionts in the pea aphid, Acyrthosiphon pisum (Fig. 1). 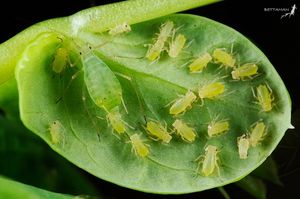 As a recipient host, they chose a viviparous, par­the­no­ge­ne­tic (=all-female) A. pisum lineage, LSR1, whose Buch­ne­ra endosymbionts carry a known point mutation that con­fers temperature-sensitivity, i.e., it leads to rapid loss of the Buchnera and thus finally to the death of the aphid host. As donor they used another A. pisum lineage, 5AY, that contains Buchnera with the heat-tolerant allele (Fig. 2). While the choice of the parthenogenetic LSR1 lineage would provide a 'clean' (=isogenic) background of both hosts, donor and recipient, in future experiments – i.e., a genetic background not messed-up by sexual re­pro­duc­t­ion cycles – temperature-sensitivity would allow a suc­cess­ful replacement of its endosymbionts by readily selectable 5AYs. For the actual transfection experiment, they imitated the known process of transmission as closely as possible: Bacteriocytes and ovarioles containing developing embryos are located near one another within the mother's abdomen. Buchnera cells are exocytosed from maternal bacteriocytes in the vicinity of a bla­stu­la-stage embryo. The Buchnera cells become extracellular within the hemocoel, and some are endocytosed by the posterior syncytial cytoplasm of the embryo in which they are later packaged into the embryonic bacteriocytes. Thus, introducing a homogenate of 5AY abdominal cells by microinjection into heat-treated LSR individuals and their recovery from this 'surgery' would come close to the naturally occurring process. 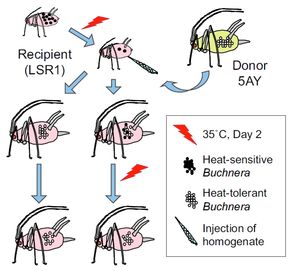 Figure 2. Experimental approach for re­pla­ce­ment of the native Buchnera symbionts within an A. pisum matriline. The recipient line (LSR1) contains a heat-sensitive Buchnera genotype, and the donor (5AY) contains a heat-tolerant Buchnera genotype. Native Buchnera are de­ple­ted by heat in the recipient line, and mi­cro­in­jec­t­ion is used to flood the hemocoel with donor Buchnera. Most embryos are successfully co­lo­nized by the donor symbionts. In some cases, complete replacement occurs in the progeny of injected females. In other cases, progeny have a mixed Buchnera population, which can be shifted completely to the donor type through further heat exposure. Source

Because Buchnera cells released from their bacteriocytes quickly decay in the hemocoel – they virtually burst – if they do not enter an embryo soon, the time window for the microinjection was narrow, and the technique itself needs expert hands (and eyes). Moran and Yun per­for­med microinjections on two sets of ~30 LSR1 individuals each, from which 4 and 6, respectively, survived the 'pre-operation' heat-shock treatment and subsequent 'surgery', albeit at the cost of notably delayed de­ve­lop­ment to adulthood. From the nine 'survivors' that finally reproduced as adults, two had completely lost the temperature-sensitive (ts) LSR1-type Buchnera and acquired the 5AY-type, one had retained the original LSR1-type Buchnera, and 6 showed a mix of both. For the latter six, they achieved a complete and stably inherited shift to the donor type by a second heat exposure (Fig. 2). Lastly, they confirmed the endosymbiont type by RFLP analysis – also routine in forensics for human DNA samples today – of a marker that is unlinked to the ts-mutation.

Although successful and a proof-of-principle the method of endosymbiont replacement developed by Moran and Yun may seem quite inefficient. But wait: transformation of E. coli can come up with 108 – 1010 transformants per microgram plasmid, yet such stunning numbers make it easy to overlook that hardly ever more than 10 – 30% of the cells survive the transformation pro­ce­du­re – depending on the transformation protocol – while those that are actually transformed are an even smaller percentage, around 0.01%. Now compare that to the 8 successfully trans­fec­ted aphids out of 60 treated. Not so bad, after all, but clearly not a 'high throughput screening' (HTS) method.

What seems more important than numbers games is the observation that the original LSR1 line and a LSR1 derivative line now harboring the 5AY-derived Buchnera behaved quite different in standardized and carefully controlled growth and reproduction tests (developmental timing, adult weight, and fecundity, among others). When tested at a constant growth temperature of 20°C, both types had a similar performance. But during growth at 20°C interrupted by a 4 h heat exposure at 35°C on day 2 after birth, the LSR1 aphids took longer to mature, were smaller, and had lower fecundity than the LSR1 aphids harboring the 5AY-derived Buchnera. "Thus, the replacement of its Buchnera greatly increased heat tolerance of the A. pisum LSR1 aphid matriline, which demonstrates a major effect of symbiont genotype on host fitness" conclude Moran and Yun, and continue "potentially, the approach could be combined with mutagenesis to explore effects of Buchnera mutations on the symbiont·host interface". Sounds like we can expect deeper insights into the aphid·Buchnera symbiosis in the very near future.