« A Tale of Two Freds | Main | Pictures Considered #31 : An Endosymbiont On Its Way To Becoming An Organelle? »

Life in a Sea of Gradients

Everything has beauty, but not everyone sees it.
– Confucius 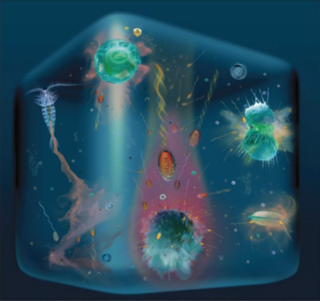 Figure 1. A view of the ocean at the microscale, emphasizing the heterogeneity of resources and microbial interactions. Stocker, R. and Seymour, J.R. Microbiol. Mol. Biol. Rev. 2012;76:792-812.

The resources available to marine microbes are patchy. Though seawater looks uniform and limpid to our eyes, that is far from the truth. Studying the oceans on a microscale has revealed that it is highly heterogeneous, having features such as marine snow and intricate chemical gradients. Therefore, microbial cells in the marine environment certainly do not all have a uniform experience. This is reflected in their numbers and heterogeneity. The one billion or so microbial cells per liter of seawater display a wide range of sizes, shapes, and lifestyles.

A major question in marine microbial ecology is whether or not this habitat heterogeneity has played a role in generating the disparate lifestyles of microbial populations. Not only that, but could a sea of gradients help us explain the current dispersal, abundance, and function of vital nutrient cycling and oxygen-producing bacteria, archaea, and eukaryotes in the Earth's oceans?

Recent studies have tried to answer these questions and more using an elegant combination of engineering and ecological theory. To interrogate microbes at the level of single cells and their microenvironments, a growing number of researchers are using technology such as microfluidics chambers to mimic these minute habitats.

Last year, scientists from MIT published a paper showing that the evolutionary trajectory of microbial physiology can be driven by a patchy habitat. When growing two recently diverged Vibrio cyclitrophicus subpopulations in a controlled microfluidic environment, one of them was seen to thrive on an "attach and remain" strategy on suspended particles, while the other thrived on a "in-and-out quick" strategy. In other words, with just a few genomic differences, one subpopulation exhibited a superior ability to adhere strongly to surfaces and outcompete other residents, while the other had decreased adherence but increased motility to travel between particles and quickly colonize new sites. This difference in lifestyle was termed a competition-dispersal tradeoff and was attributed to the microniches that particles such as detritus and phytoplankton exudates provide in the water column, much like landscapes impart spatial heterogeneity and drive speciation of plants and animals.

Patchiness is not just caused by particles. Turbulence, diffusion, thermal mixing, currents, and other physical perturbations in ocean water churn and stir molecular-sized resources. These phenomena occur on extremely small scales and modeling shows just how heterogeneous a solute can become in a small volume of water. Though some microbes, such as the aforementioned vibrios, can move toward certain stimuli in this complex marine soup, planktonic cells are at the will of the water mass. Brownian motion counts for very little here: it allows a nonmotile cell to explore an average of just 80 nanoliters per day.

Near the coastal oceans and in estuaries, especially at the higher latitudes that have distinct seasonal patterns, dissolved organic carbon compounds from intermittent nutrient pulses make microgradients even more pronounced. During a time of high river discharge such as during the rainy season, a coastal environment becomes inundated with resources from washed-out terrestrial matter, and sediment re-suspension, which often lead to phytoplankton blooms. The influx of metabolically available carbon creates a resource landscape far from homogenous. Biogeochemists and atmospheric scientists are especially interested in these coastal zones because of their high seasonal productivity and ability to be either a source or sink for important compounds such as carbon dioxide.

So if you were to hop in a submarine and shrink down to the size of a bacterium, what would you see outside your porthole as you check out the waters? It depends. In some areas of the oceans you might actually see very little. At the density of the tiny free-living microbes in many nutrient poor open ocean habitats, your nearest living neighbor may be over 100 cell lengths away! You would have to bring along special telescopes to notice the heterogeneity of the water in these sparse habitats, but it's there. On the other hand, plop down a few miles out from the discharge of the Amazon River and your experience would be much different. Surrounding your vessel are sinking clumps of dead diatom cells that are being rapidly consumed by piles of heterotrophic Proteobacteria. Not far behind is a trail of Pseudoalteromonas gobbling the remnants of that sloppy feeding. Eerily shaped protists loom overhead and make a meal of the innumerable free-living planktonic cells that are enjoying random contact with molecule-sized dissolved nutrients. Your sensors fluctuate wildly as you cruise between pockets of chemicals in the process of diffusing.

Well, we will probably never invent a tiny vessel to undertake this journey, but there are technologies that are helping us peer into this microscopic world. Microfluidics is a great way to control and create patchy environments for microbes and watch how they function. Single-cell sorting with methods such as optical tweezers, which use the tiny forces exerted by laser light to trap and move a cell, can be helpful to isolate cells with interesting qualities. As microscopy improves (think 2014's Nobel Prize in Chemistry) we are starting to see beautiful images of bacteria and other microscopic life attaching to marine particles and interacting with one another. Outside of controlled laboratory conditions, advances in environmental genomics, proteomics, transcriptomics, and other sequencing-based analyses contribute valuable information about the effects of seawater heterogeneity on uncultured microbes. 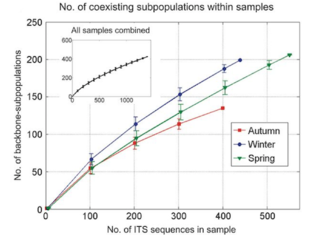 Last year an extensive study of genetic diversity in wild populations of Prochlorococcus revealed the existence of hundreds of coexisting subpopulations likely inhabiting subtly different niches in the heterogeneous surface ocean. In the study, researchers sorted and sequenced the genomes of over 1000 Prochlorococcus cells from a research station in the Sargasso Sea. Using specific regions of the genomes to build a phylogenetic tree, they found several distinct groups. The distribution of single nucleotide polymorphisms was used to elucidate the evolutionary forces that may have formed the groups (called clades). Much of the polymorphism between clades was nonsynonymous and occurred within functional genes (e.g. genes for transporters and oxidative stress response). In addition, each clade had their own distinct set of "flexible" genes along with a set of core genes shared by all clades. There was also strong evidence of seasonal fluctuation in the representation of the clades. This led the research team to conclude: "That [the clusters] have different alleles of genes associated with environmental interactions, carry a distinct set of flexible genes, and differ in relative abundance profiles as the environment changes suggests strongly that they are ecologically distinct." In other words, though every liter of seawater may contain up to 1 billion Prochlorococcus cells, hundreds of subpopulations actually exist that are each thriving in very specific, if subtly distinct, niches. In fact, the relationship between the number of genomes analyzed in the study and the number of subpopulations found is quite steep (see right), suggesting that increasing the number of single-cell genomes may have resulted in even more diversity. 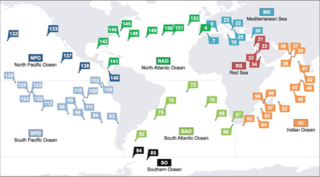 If this phenomenon exists for Prochlorococcus, could it be true of other marine microbial lineages as well? A recent expedition called Tara Oceans, which surveyed hundreds of ocean water samples from around the world, published its preliminary analysis in a special edition of Science earlier this year. Among other results, the expedition turned up 40 million predicted genes, many of which are completely novel. It seems that marine microbial life, at least at the genomic level, may be just as diverse as the habitat where it is found.

I especially love this topic because it allows imagination and science to work hand-in-hand. It's easy to write off the hypothetical mini-sub journey as just a fantasy, but these imaginative thinking exercises often contribute to experimental designs or new hypotheses worth testing. Microbes are constantly surprising us, and investigating them in the context of their complex microhabitats is sure to allow that trend to continue.

Brandon is a Graduate Research Assistant in the Department of Microbiology at Oregon State University.