« Pictures Considered #31 : An Endosymbiont On Its Way To Becoming An Organelle? | Main | A Snippet: Who Invented Agriculture, the Ants or the Bees? »

For evolutionary biologists, the aphid·Buchnera symbiosis is a favorite model to study 'or­ga­nel­lo­ge­ne­sis', how a once free-living gammaproteobacterium became an obligatory endosymbiont of its aphid host – now its buddy rather – over the course of >200 Ma (million years) of co-evolution. Todays Buchnera endosymbionts have reached the stage of mitochondria or chloroplasts – well, almost – and this shines a bright spotlight on Lynn Margulis' famous 'endosymbiont theory' from 1967. We at STC have featured this symbiosis earlier here, and a fairly related case, the mealybug story, here. But note, it also got its very own blog: the aphid room.

Jennifer Frazer reported recently here in STC on 'symbiont swapping' in the dark brown lichen Ce­traria aculeata. This lichen's fungal partner apparently dismissed the algal, photosynthesizing partner on its way from the Arctic to the Mediterranean – or vice versa, that's not known for sure yet – and acquired a better adapted one, because 'climate change'. For the curious evolutionary biologist, this raises the question whether 'symbiont swapping' is also possible for the highly in­ti­ma­te aphid·Buchnera symbiosis. Spoiler alert: the answer is Yes.

Symbiont Exchange in the Wild 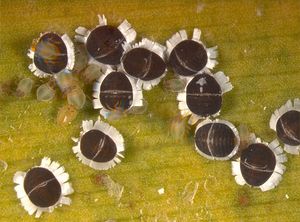 The obligate Buchnera aphidicola endosymbiont, found so far in most members of the Aphididae family, has been lost in many species of the monophyletic Ce­ra­ta­phi­di­nae subfamily. For example, the coconut aphid Ce­ra­ta­phis brasiliensis, harbors instead a yeast-like fun­gal sym­biont, YLS. C. brasiliensis (Fig. 1) is an interesting insect in its own right – and here is its dauntingly complete ta­xo­no­mic description – but I will focus on the fungal sym­biont YLS.

In C. brasiliensis, the YLS resides both intra- and ex­tra­cel­lu­lar­ly but not in specialized cells – as do the Buchnera in the bacteriocytes (Fig. 2) – and is transmitted maternally. Efforts to cultivate YLS outside its host failed so far, un­der­pin­ning the intimacy of this symbiosis. The yeast-like growth of YLS is a morphological trait of the 'true yeasts' like Saccharomyces cerevisiae (As­co­my­ce­tes) but also frequently found among other Ascomycetes and Basidiomycetes. In the latter two phyla, one finds species with dimorphic growth – i.e., the capacity to grow either yeast-like by budding-off daughter cells or by forming septated hyphae – especially among pathogenic species. 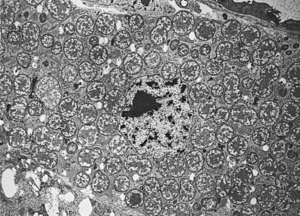 Figure 2. Symbionts (Buchnera aphidicola) with­in a bacteriocyte of a pea aphid (Acyrthosiphon pisum). The central object is the host nucleus; Buchnera cells are round and packed into the cytoplasm. Source

A preliminary phylogenetic analysis – 'pre­li­mi­na­ry' be­cause a minimalistic set of just three highly conserved pro­teins was used for tree construction – suggests that YLS belongs to a branch of the Ascomycetes that also includes the entomopathogenic fungus Cor­dy­ceps mi­li­ta­ris. Several members of the 400+ species of the Cor­di­ceps family are important in traditional Chinese and Ti­be­tan medicine, and cordycepin, isolated from C. militaris, is a base-analog, actually 3'-deoxy-adenosine, with a po­ten­ti­al of an anti-cancer drug. Also in this branch of the Ascomycetes one finds Fusarium oxysporum "whose strains represent some of the most abundant and wide­spread microbes of the global soil microflora", as its Wi­ki­pe­dia entry claims, and which is one of the most heartily hated fungi in mi­cro­bi­o­lo­gy labs because its spores in­e­vi­tab­ly inoculate all other culture dishes around. Yes, quarantine wards are also an issue in mi­cro­bi­o­lo­gy labs. But obviously, the C. brasiliensis aphids have at one point successfully 'domesticated' a fungus from a potentially dangerous family.

Vogel and Moran sequenced the genome of YLS to learn more about its metabolic properties and to compare genome evolution of prokaryotic and eukaryotic endosymbionts under conditions of small population sizes and restrained possibilities for genetic exchange (except with their host). YLS appears to have a complete set of functional re­com­bi­na­tion proteins, including the genes ne­cessary for meiotic division (although meiosis and the formation of sexual spores hasn't been ob­served yet). This is in stark contrast to bacterial endosymbionts whose genomes usually lack re­com­bi­na­tion functions altogether. Bioinformatic analysis of the YLS genome revealed the pre­sen­ce of complete metabolic pathways for the use of glucose and several other sugars as carbon source, aerobically and fermentative. The pathways for the synthesis of all amino acids, essential and non-essential, are present in the YLS genome, which would allow YLS to supply its host as ef­fi­ciently as Buchnera. In addition, the YLS genome encodes a plethora of pathways for the synthesis of secondary metabolites, many of them potential antimicrobials, which could contribute to the defense of  C. brasiliensis against predators of any size.

As compared to its free-living closest relatives, a number of orthologous genes show a higher de­gree of genetic drift – accumulation of codon substitutions – in YLS, which is similarly found in genes from bacterial endosymbionts, including Buchnera, when compared to those of free-living bacterial relatives. However, there are no signs of genome reduction but rather genome ex­pan­sion: in the cases compared, e.g., introns in orthologous genes tend to be larger in YLS than in its relatives. For now, this type of genome analysis is at its very beginning, yet it's already apparent that genome dynamics in prokaryotic and eukaryotic endosymbionts are quite diverse. 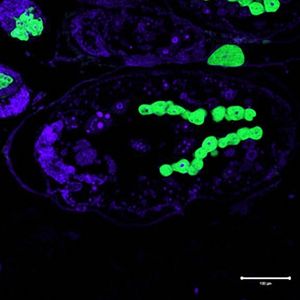 When did the symbiont exchange in the Cerataphidinae happen? Fossils of their primary host plant, Styrax sp., date back to the late Cretaceous (99 – 65 Ma) and their continued into the Eocene (55 – 35 Ma). Therefore, the establishment of YLS in lieu of Buchnera as obligate sym­biont in an ancestor of C. brasiliensis may be con­si­de­rab­ly more recent than the aphid·Buchnera symbiosis with its assumed age of >200 Ma. By the way, 'more recent' seems somewhat inappropriate when talking of periods of tenth of millions of years but these are evolutionary time scales. Yet there are not only the fossil record or extrapolations from phylogenetic studies! Braendle and coworkers found by antibody staining of tissue samples that in Tuberaphis styraci, another member of the Cerataphidinae that carries YSL as symbiont in place of Buchnera, the differentiation of two types of bacteriocyte precursor cells and their localization in embryos (Fig. 3) follow the same timely order as in A. pisum, albeit at a largely reduced number of bacteriocyte precursor cells. These authors could also show that bacteriocyte differentiation and localization proceeds largely undisturbed in Buchnera-depleted A. pisum aphids – depletion was achieved by antibiotic treatment – which demonstrates that bacteriocyte differentiation is not triggered by the endosymbionts. Therefore, the still largely functional pathway of bacteriocyte formation in Tu­be­ra­phis styraci makes it likely that adaptation to its (now lost) Buchnera endosymbiont had pre­ce­ded the acquisition of the YSL. At present we can only speculate on why the Cerataphidinae branch of the aphids skipped their already established symbiosis with Buchnera in favor of a symbiosis with a fungus. But it apparently happened and it was not just a brief escapade.

To come full circle, next week's post will address symbiont exchange in the lab...