Your Operating System on a Thumbdrive – A Snippet 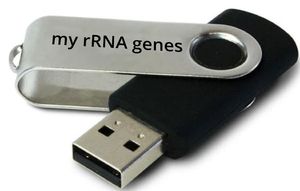 At the heart of every cell's 'operating system' you find the ribosomes, these ingenious nano‑machines (diameter ~20 nm) that translate messenger RNA (mRNA) into all kinds of proteins the cell needs to build and maintain itself (see ribosomes busy at work here). Ribosomes were first described by the electron-microscopist George Pa­la­de in a paper from 1955, in which he ponders on elec­tron‑dense particles lining the endoplasmatic reticulum of rat pancreas cells: "The relationship between the membrane of the endoplasmic reticulum and the small granules deserves special consideration". Indeed, they deserved and got consideration: today the PubMed literature database lists 52,281 papers dealing with ribosomes ‒ comparable to the number of ribosomes in rapidly growing E. coli cells. With such numbers it's no wonder cells spend roughly 2/3 of their engergy budget on the synthesis of ribosomes and translation! And yes, cells really tend to stick to "their" operating system: or­ga­nel­les such as chloroplasts and mitochondria have ribosomes ‒ and the genes ecoding their com­po­nents ‒ that resemble those of their bacterial ancestors more than those of their eukaryotic hosts. 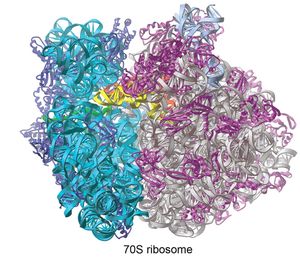 Figure 2. The bacterial 70S ribosome, which also contains more than 50 pro­teins. In the ri­bo­so­me structure, the 16S, 23S, and 5S rRNAs are colored cyan, gray, and gray-blue, re­spec­ti­ve­ly, and the small and large subunit ribosomal pro­teins are dark blue and magenta, re­spec­ti­ve­ly. Two tRNAs (yellow and orange) and a mRNA (green) are visible inside the ribosome. Source

Ribosomes are composed of ~50 proteins and three RNAs, termed ribosomal RNA (rRNA), and arranged in two subunits, with the sites of protein synthesis and mRNA-binding at their interface (Figure 2). It was as­su­med for decades that the ribosomal RNA provides a scaffold on which the orderly bound ribosomal proteins perform their job of joining amino acids to a growing peptide chain. The first hint that this might be less than half the truth came from deciphering of the genetic code, when it was shown that the codon-anticodon interactions of ribosome-bound tRNA and mRNA drive translation, with proteins being casual bystanders. But it still came to some surprise when the elusive ribosomal 'pep­ti­dyl­trans­fer­ase' ‒ the enzymatic reaction that joins amino acids by a peptide bond ‒ turned out more recently to be actually a ribozyme-type activity located in the rRNA moiety of the large ribosomal subunit. So we have a remnant of the 'RNA world' as key component of the cell's operating system? Maybe...

Intuitively, you would probably guess that in prokaryotes the genes encoding such vital parts of the 'operating system' are encoded on the chromosome, the harddrive. They are, in almost all known cases, in archea and bacteria alike. In bacteria, the three ribosomal RNAs ‒ 16S, 23S, and 5S rRNA ‒ are encoded by "rDNA" genes that are organized as an operon and transcribed from a com­mon promoter (Figure 3). A long primary RNA transcript (~4,600 nt), which includes two so-called 'internally transcribed spacers' (ITS) that in many cases encode tRNAs, is processed by specialized RNases to yield the individual rRNA species that are then assembled with the ribosomal proteins into precursor ribosomal subunits.

Deviating from the rule that in the compact bacterial genomes most genes come in just one copy per genome, one finds between only one rRNA operon in the Alphaproteobacterium Bra­dy­rhi­zo­bium diazoefficiens (genome size 9.1 Mb) and a whopping 18 in the Cyanobacterium Tolypothrix campylonemoides VB511288 (genome size 10.6 Mb). Apparently the number of rRNA genes is not related to genome size but may reflect different ecological strategies of the bacteria rather. Although mostly confined to a chromosomal localization, a few cases are know where additional copies of rRNA operons are located on large plasmids (called 'mega plasmids' or 'secondary chro­mo­somes'), which are present in all Vibrio species and in numerous Alpha- and Beta­pro­teo­bac­teria. 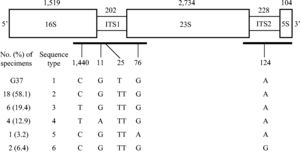 Figure 3. Schematic representation and se­quen­ce variation of the M. ge­ni­ta­li­um rRNA operon. ITS1 and ITS2 refer to the internal transcribed spacers between the 16S and 23S rRNA genes and between the 23S and 5S rRNA genes, re­spec­ti­ve­ly. The size (in base pairs) indicated above each region was derived from the M. ge­ni­ta­li­um genome sequence. The line length is not proportional to the number of nucleotides involved. The black bars represent the PCR amplified fragments used to detect po­ly­mor­phic nucleotide. Source

Enter Aureimonas sp. AU20 (Figure 4) and its cousins, humble members of the Rhizobiales subfamily of the ubiquitous Alphaproteobacteria (we featured other Alphaproteobacteria here and here). Recently, Hisayuki Mitsui and co-workers isolated Aureimonas from the stem of a soy bean plant, sequenced its genome, and found to their surprise that it lacks rRNA genes on its chromosome. Instead, a typical bacterial rRNA operon is carried on a small (9.4 kb) multicopy plasmid (18 ‒ 34 copies/cell) that is also present in the 4 cousins (out of 12) of Aureimonas that lack chromosomal rRNA genes, too. Thus it's apparently a family trait, and not a mere genetic 'accident'. The rRNA-carrying plasmid is distantly related to the Pseu­do­mo­nas plasmid pPS10, and its replication driven by a homolog of the RepA plasmid initiator pro­tein. It does not encode any known factors for plasmid se­gre­ga­tion and may rely, therefore, solely on stochastic distribution of plasmid copies among daughter cells. Also, the authors could not detect any of the plethora of known addiction modules that usually ensure plas­mid maintenance in the host. Most likely, the selective pressure to stably maintain the rRNA-en­co­ding plasmid is sufficiently high in this case: you better keep your thumbdrive plugged in!

As a frequent reader of this blog you probably wonder whether there aren't any viruses lurking here again. And you would be right! Virus DNA recently isolated from the marine sponge Hymeniacidon perlevis contained a bac­te­ri­al 16S rRNA gene. Since marine sponges usually live in consortia with bacterial epibionts and symbionts, it is un­fortunate that the authors don't specify whether this 16S rRNA gene was carried by an (apparently) trans­ducing bacteriophage or by a virus of the eukaryotic sponge. In any case, this provides another example for an 'operating system on a thumbdrive'. Does this mean that also rRNA genes participate in horizontal gene transfer? There is some evidence that this is in fact the case. Therefore, rRNA-based phylogenetics ‒ the marvellous idea that allowed Carl Woese to propose his three-domains model ‒ may turn out to be really messy in some niches at least. That would then be the normal state of affairs in most of biology.