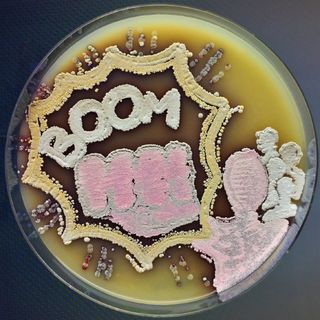 Superheroes. Created by Sanne Westhoff and a cast of Streptomyces coelicolor mutants on soy flour mannitol.

Few people know that Alexander Fleming, the discoverer of penicillin, loved to create pictures on his agar plates, rendering images of ballerinas, houses, and fighters with his beloved microbes. Writing for the Smithsonian magazine, Rob Dunn states that, "Fleming’s discovery... was a function of his eye for the rare, an artist's eye. Other scientists had undoubtedly seen Penicillium growing on their petri dishes before Fleming, but they had thrown those dishes away as failures." Developing an "artist's eye" – the ability to look deeply at a subject and appreciate nuances that can remain hidden in plain sight – is a skill that benefits scientists and artists alike. In this spirit, ASM launched its first agar art contest this past summer, which was a big success, both in terms of the enthusiasm among researchers (83 plates were submitted, from labs all over the world), and in the overwhelming media attention that was fueled by the eye-catching images. Five judges were asked to evaluate each submission across four categories: creativity, design, presentation, and accessibility of its description. As one of the judges, I can say that the task was daunting, because the number of amazing entries far outnumbered the prizes offered. Presented here are a few of my own favorites, along with thoughts from the artists about their experience with the creative process and its relationship to science. 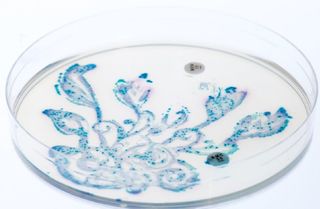 Despite its reputation as dry, technical, and free from the whimsy of human imagination, science, like art, abounds in metaphor. Likewise, metaphor is found in the mirroring of themes between the images on the agar plates and the artists' research. Sanne Westhoff, for example, studies bacterial chemical warfare – the ways in which bacteria compete and inhibit one another's growth. In particular, she was intrigued by the altruism of Streptomyces coelicolor strains that release antibiotics to help their neighbors while putting themselves at a disadvantage. Some of these antibiotics produce color, which she saw as "the colors of altruism." She conceived the idea of cajoling the bacteria into forming the image of a superhero, since "superheroes are usually fancy looking mutated people who try to protect others at their own expense." 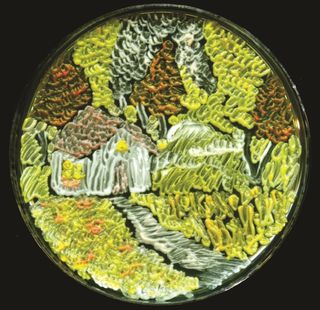 Nicola Fawcett works with microbes of the human gut, which form a complex ecosystem, as in Darwin's "tangled bank" metaphor. "It's increasingly evident that what is important is not one particular strain or species, but a diverse, balanced ecosystem of symbiotic microbes," she notes. In a healthy person, a dynamic equilibrium is maintained among this multitude. Problems occur when the balance is upset and one microbe gains an advantage, like kudzu overrunning the tangled bank. She had watched this process occur in her grandfather as he aged, as previously docile bacteria took advantage of the shifting balance of power to overtake "the garden." Wanting to convey this idea with the emotional understanding that art can provide, she created "Garden of the Gut Bacteria," using actual gut bacteria to depict a lovely garden balanced atop a web of constraints that can unravel if any one organism gains an undue advantage over its neighbors. 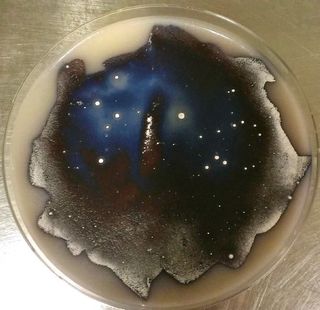 The Streptomyces Sky. Created by Streptomyces coelicolor on soy flour mannitol, with a little nudging by Joseph Sallmen.

Maria Eugenia Inda's perception of the yeast she was working with at Cold Spring Harbor Laboratories (CSHL) was influenced by a visit to New York City's Museum of Modern Art, and deepened by homesickness for her native Argentina and its lush farms. She says that "coming from an agricultural family, the harvest season means to me a time of joyfulness, workers unity, productivity, goals achievement" – the very qualities she encountered during her experience at CSHL. When she turned an artist's eye on the warm spectrum of colors produced by her Saccharomyces cerevisiae beta-carotene mutants, she knew just what to do with them – Harvest Season evokes Van Gogh's dreamy swirls and the warm emotion attached to a cherished memory of home. Metaphorically, she likened the abundance of harvest season to the current state of yeast genetics, with its cornucopia of opportunity.

The unintended theme behind Joseph Sallmen's work is an old one in biology –the role of chance in evolution. The Streptomyces Sky appeared on a control plate that Joseph had streaked with Streptomyces coelicolor and treated with the antibiotic spectinomycin. After his experiment, he didn't get around to discarding the plate right away, but left it out on his bench. His Flemingesque attitude paid off, however. The Streptomyces, under threat from the spectinomycin, had launched its own antibiotic defense in the form of oodles of actinorhodin – an antibiotic that produces a lovely blue color, here suggesting the night sky, with sporulating Strep imitating stars and reflected starlight from a building. 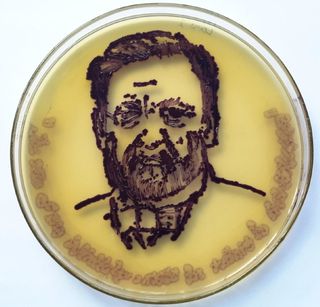 Given that scientists often have a difficult time communicating their research to nonscientist friends and family in a way that does not elicit glazed pupils or drooping lids, the agar artists found it particularly satisfying that their art provided an accessible portal to their research for their less technically oriented friends. Nicola Fawcett pointed out that "art sticks in people's minds far better than dry words or text." According to Darshika Jarasuriya, her friends were "baffled and intrigued" (and likely more than a little impressed, I'll add) upon seeing her rendition of Louis Pasteur made from Chromobacterium violaceum. They took the opportunity to learn a bit about microbiology, which she found quite satisfying. Of course, sometimes dry and technical is the way to go, as when a friend of Ishara Parveen found the beautiful Flowering Sunshine so appealing that she asked if she could eat it! Considering that it was created from Escherichia coli and Salmonella, I'd recommend a nice flan, instead. 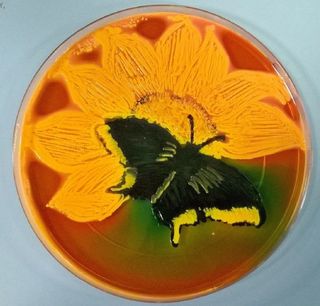 Amusingly, the endeavor was often more like a creative collaboration than the one-sided situation of a researcher examining her subject. The microbes are invisible when first streaked on the agar, and only appear as the bacterial colonies grow, so artists were never sure what the results would be. Maria Inda spoke like a stage director when she noted that a challenge in creating Harvest Season was streaking the image then hoping that the Saccharomyces would "understand my intentions." Nicola Fawcett echoed the analogy, grumbling that her microbial collaborators, "seldom behave the way you want them to, steadfastly refuse to do what you expect, and create no end of inconveniences for you by their behavior." She is even in favor of amending the old show-biz adage to "never work with children and animals... or bacteria."

As we've seen, painting pictures with microbes is more than just a quirky use of downtime in between lab experiments. The striking images, the power to communicate science, and a deepened relationship of researcher to microbes are certainly part of the appeal, but also intriguing is the interplay of human creativity and bacterial creativity – which perhaps stem from the same impulse. In Joseph Sallmen's case, for instance, it's difficult to say who the actual artist was – the microbes or the man! Given their positive experience, all of the artists featured here say they plan to enter the contest again next year, and some are already planning their pieces. I wonder, how would Fleming have fared against this talented slate?