Back from the ISS – A Snippet

Strange is this little animal, because of its exceptional and strange morphology and because it closely resembles a bear en miniature. That is the reason why I decided to call it little water bear.
− J.A.E. Goeze, Quedlinburg, Germany, 1773

In this blog, we don't usually consider big, multicellular animals, say, arthropods like Drosophila, ne­matodes like C. elegans, or tardigrades like Hypsibius dujardini (see here for their positions in the metazoan (=animal) branch of the Tree of Life). We do make exceptions for the hosts of mi­cro­bial endosymbionts, and here's a recent one. Why allow the 'water bears' (tardigrades)? With body lengths of 0.5 ‒ 1 mm (see picture on the main page), they are a bit too big to be honorary mi­crobes but some are bacteriovorus ‒ as Elio noticed ‒ so they fit within our limits. Turns out there are some deeper connections with the microbes, but first a brief portrait. 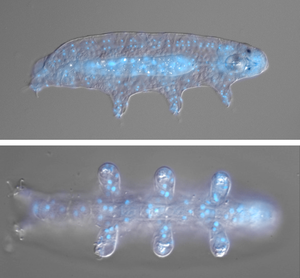 Ever since they were first described by German pastor and naturalist Johann Goeze in the late 18th century, the tardigrades have attracted amateurs and zoologists alike (their taxonomy and other 'specs' can be found here). Pro­bably they charm because their anatomy resembles that of tiny mammals, with a rounded head, a mouth and a pair of eyes, fleshy legs with claws at the feet (yes, of course you can get them as plush toys!). Like arthropods, tardigrades molt several times during their few months of active life (watch this short video clip). H. dujardini has a generation time of 13 – 14 days at room temperature, and the embryos have a distinctive cleavage pattern with asymmetric cell divisions, nuclear mi­grations, and cell mi­grations occurring in reproducible patterns. Most tar­di­gra­des are transparent, and details of their anatomy are easily observed (Figure 1). Although cell numbers for in­di­vi­dual animals have not been precisely counted, a rea­son­able guess would be a cell number of ~1,000 / individual, comparable to the nematode C. ele­gans. Most tardigrades propagate asexually by parthenogenesis ‒ with 'all-female' populations ‒ but both sexes have been occasionally observed for some of the >1,000 extant species. They live all over the world, preferentially on mosses, but some are found on the ocean floor as well as in more harsh environments like Antarctica. Not really extremophiles – they thrive best at human-friendly environmental conditions – tardigrades are highly resistant to most forms of physical abuse. They are famous for surviving extended periods of complete desiccation (<0.3% H2O, which is really dry) by resorting to some kind of 'suspended animation' known as cryptobiosis. Milnesium tardigradum earned considerable prominence for its sojourn at the International Space Station (ISS), surviving space vacuum (pretty well) and solar radiation (barely) to an extent comparable to the tenacious bacterium Deinococcus radiodurans.

When Thomas Boothby and his coworkers from the Gold­stein lab at UNC, Chapel Hill, sequenced the genome of Hypsibius dujardini recently they found to their surprise a ­whopping 17% of "foreign" genes, genes which had their closest homologs in bacteria, fungi, plants, archeae, or viruses (Figure 2). This extraordinary high number immediately raised the question of possible bacterial contamination before or during sequencing. But the authors could exclude such flaws, most conclusively by their finding that many of the "bacterial" genes in the H. dujardini genome had acquired introns. And these introns have intron / exon border sequences ‒ the key signals for intron splicing during mRNA maturation ‒ that are indistinguishable from those of the tardigrade's bona fide own genes. This, together with the observation that the codon usage of many of these "foreign" bacterial genes has been adjusted to the codon usage of H. dujardini, suggests that they were acquired by horizontal gene transfer (HGT) a long time ago. 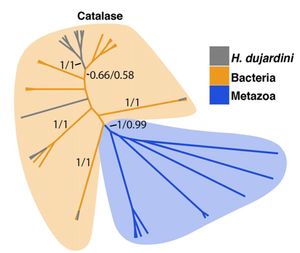 What is truly intriguing is that many of these "foreign" genes encode functions that are potentially useful for an organism that has to frequently cope with stress, par­ti­cu­lar­ly with re-hydration after extended periods of de­sic­ca­tion. The H. dujardini genome has, for example, in ad­di­tion to its own 7 Rad51 genes, another 6 recA genes of bacterial origin. The universally conserved RecA/Rad51 proteins are key players for homologous recombination, which drives genome recovery after its desiccation-driven fragmentation. Other 'little helpers' of bacterial origin in H. dujardini include proteins containing either of two different catalase domains ‒ important for the protection against reactive oxygen (ROS). That these were drawn from at least 5 different bacterial phyla (Figure 3) makes it highly unlikely that gene import occurred just once, or twice, perhaps in some sort of an accidental merger of a bacterium with the tardigrade. Rather this suggests that multiple import events of fragmented bacterial DNA during the evolution of H. dujardini resulted in this unique gene assembly. Carefully enough, however, the authors do not propose that the extraordinary stress-resistance of H. dujardini is brought about by the "foreign" stress-response genes, but speculate that already established resistance was bolstered by these imports.

The finding of a substantial percentage of "foreign" genes in the genome of a metazoan is not without precedence, at least not among genomes of "microinvertebrates". In the genome of the bdelloid rotifer Adineta vaga (see here for a video portrait, and here for a feature of the rotifers in this blog), Gladyshev et al. found roughly 10% "foreign" genes, mostly of bacterial origin, pre­do­mi­nant­ly in the telomeric regions of the chromosomes. Like the tardigrades, the bdelloids are highly resistant to desiccation, and DNA uptake and incorporation into their genomes by recombination might occur during rehydration: as some sort of 'side-effect' during the recovery of their own fragmented genome.

Why are these findings of numerous "foreign" genes in the genomes of tardigrades and bdelloid rotifers interesting, maybe even important? It has become clear over the last two decades that recurrent horizontal gene transfer events ‒ over billions of years of evolution ‒ have blurred the genetic borders between prokaryotic lineages and even between the domains of life. This has occurred to such an extent that most microbiologists abandoned the idea (ideal?) of a consistent phylogenetic 'tree' of vertical descent of prokaryotic species. They're now patiently working their way through a thicket, armed with Carl Woese's rRNA-based phylogenetic approach as machete: powerful but clodhopping. It appears that zoologists will face similar shrubbery ‒ so, welcome to the club!

Addendum
The results presented in this blog post ‒ particularly the extraordinary high degree of HGT genes in the Hypsibius dujardini genome ‒ have been questioned in a recent paper by Koutsovoulos et al. (see the detailed comment by Sujai Kumar below). Rather then simply retracting our post we prefer to point to conflicts. Because this is science.