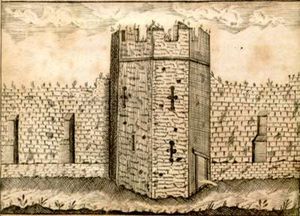 Predator-prey relationships exist all over the world of li­ving things, from microbes to animals and humans. In defense against predators, animal prey use varied stra­te­gies such as hiding from, distracting, escaping, or fighting predators. Humans build walls and ramparts to protect them­sel­ves within cities from potential animal or human aggressors (Fig. 1). But how do bacteria defend them­sel­ves against predators? Although thought to be simple organisms, they have evolved complex responses to the challenges they face. A popular example is adopting group behavior through quorum sensing. When acting as a group, bacteria can form single or multispecies biofilms and some, like Bacillus subtilis, can sporulate when nutrients are limiting, which keeps them in a dormant state until conditions become favorable (Figure 2a). Some species of bacteria, like My­xo­coc­cus xanthus, are predators that feed on other microbes, including other bacteria and yeast. M. xanthus forms single species biofilms when nutrients are abundant, and builds fruiting bodies when starving (Fig. 2b).

The impressive list of predator-avoidance behaviors used by bacteria include changes in motility, morphology, making biofilms, and sporulation. Which do they choose to defend themselves against predator bacteria like M. xanthus ? One natural prey to this species is B. subtilis. Both M. xanthus and B. subtilis are soil dwelling. Studies of their interactions tell us that B. subtilis protects itself by forming spores and producing the antibiotic bacillaene. It turns out that's not all that B. subtilis can do. Recently, studies have shown that B. subtilis forms large cellular assemblies or "me­ga­struc­tures" when being cultured with M. xanthus. How about these structures? Are they fortifications used for defense against the predator? 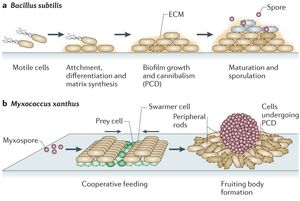 Figure 2. Biofilm and fruiting body formation of B. subtilis and M. xanthus, respectively. Biofilms (a) are formed when motile cells adhere to a sur­face and produce an extracellular matrix (ECM) and cells within the matrix have distinct functions. Some cells undergo programmed cell death (PCD) and some cells can form spores. M. xanthus cells swarm prey (b) and form fruiting bodies during starvation conditions. Spores are produced in the fruiting body. Source

Me­ga­struc­tures do not form in the absence of M. xanthus, which suggests that their formation is a response to predation. Since predation is enhanced by motility, the authors hypothesized that B. subtilis me­ga­struc­tures would be attenuated in the presence of M. xanthus cells that cannot co­or­di­nate motility. While inhibition of M. xanthus S-motility or A-motility does not fully abolish B. sub­ti­lis megastructure formation, inhibiting both motility types does, meaning that an efficient pre­da­to­ry attack by M. xanthus is required for megastructure formation. If M. xanthus motility is im­paired, it is possible for the prey cells to evade predation by growing over the agar surface faster than M. xanthus. 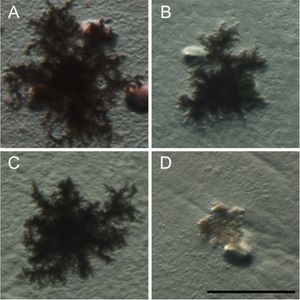 Megastructure formation of B. subtilis in response to M. xanthus predation is a newly found defense mechanism against a bacterial predator, further highlighting the so­phis­ti­ca­ted ways bacteria respond to challenging en­vi­ron­ments. Megastructures are likely important for safe­keeping of spores until conditions become favorable for growth. Thus, the story brings to mind what happened in human history when walled cities were besieged by in­va­ders. By protecting their food supply, the inhabitants made it scarce for the attacking hordes. Thus, they safe­guarded their city's ability to survive and later thrive.

Future work will be required to determine if me­ga­struc­tures structures are made as a specific response to M. xanthus predation or if they form under other en­vi­ron­men­tal stresses. Also, it is unknown if similar structures can be formed by other Bacillus family members found in soil environments. More research is required to further understand the relevance and function of me­ga­struc­tures in mixed soil communities. M. xanthus induces the production of antibiotics in other bac­te­ri­al species like Streptomyces coelicolor. By influencing antibiotic formation, this story may have clinical relevance in combating the problem of antibiotic resistance.