« Pictures Considered #32 : A Model for DNA Segregation in 1963. | Main | Megastructures: Defense Fortifications of Bacillus subtilis for Protection from Myxococcus xanthus » 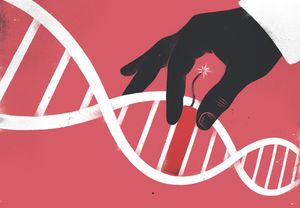 Back in 2003, the British geneticist Austin Burt suggested the development of "Site-specific selfish genes as tools for the control and genetic engineering of natural po­pu­la­tions". He wanted to stimulate discussions on the de­sir­abi­l­i­ty ‒ and feasibility ‒ of eradicating or genetically mo­difying particular species, namely the Anopheles mos­qui­toes, which are responsible for the transmission of ma­la­ria-causing Plasmodium parasites to humans, with an es­ti­mated 600,000 ‒ 800,000 human casualties worldwide in 2013.

So, what are selfish genes ? Whenever E. coli geneticists in the last century wanted to 'tag' a gene in one of their lab strains they introduced a temperature-sensitive plas­mid carrying Tn10, a transposon that en­codes a transposase ‒ a copy&paste-type of enzyme ‒ and resistance to tetracyclin. After several generations of growth at elevated tem­pe­ra­tu­re, the plasmid was lost from the cells. Nevertheless, after plating, a number of resistant colonies remained, now carrying a copy of the transposon on their chromosome: the selfish transposon had refused to perish to­gether with its carrier plasmid and had hopped to the chromosome for rescue (whether the trans­po­son would be located anywhere close to the gene to be 'tagged' was another question, usually tak­ing a keen PhD student a week to find out). Transposons, or 'trans­po­sa­ble elements', come in (al­most) countless varieties (STC featured particularly cute ones here and here) and are wide­spread in all types of genomes; up to an estimated 45% of our human genomic DNA is made up of transposons 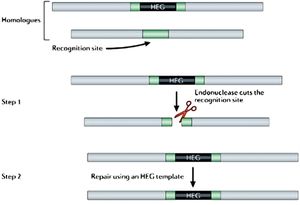 Figure 2. A specific homing endonuclease gene (HEG) is typically found inserted between two specific sequences of DNA within the genome (light green). The HEG (dark green) codes for the production of an enzyme that recognizes these two specific coding sequences when they are not interrupted by the presence of an HEG. In individuals that carry the HEG on only one of two homologous chromosomes, the enzyme catalyses a break within the DNA sequence of the chromosome that lacks the HEG (step 1), which is then naturally repaired using the HEG within the homologue as a template (step 2). Source

A site specific selfish gene, as envisioned by Burt, could be one of the so-called homing endonucleases (HEG). These are re­striction enzyme-type of proteins that cut DNA at a spe­ci­fic sequence and thus alarm the double-strand break re­pair squads of the cell. Cells loathe double-strand breaks in their DNA and deal with them pronto! by either non-homologous end joining (NHEJ) or ho­mo­lo­gous recombination (HR). During the latter pro­cess, an intact copy of the disrupted DNA stretch any­where in the genome serves as template for precision-repair of the lesion. Since in diploid eu­kar­yo­tes this 'intact copy' is the endonuclease gene on the sister chromatid ‒ and ac­tu­ally the culprit for having the endonuclease synthesized in the first place ‒ it gets copied during the repair process to the new location (Figure 2). In sexually propagating species, such genes easily convert heterozygotes into homozygotes because they 'drive' through a population at a rate that largely exceeds the Mendelian 50% chance of inheritance in the offspring. Thus the term 'gene drive'. In the lab, this seemingly straightforward approach has met with limited success so far. Mostly because HEGs turned out to be hard to modify genetically to recognize different 'target sequences', and to cut them with high-enough efficiency. Also engineering TALENs was not a solution to these latter two problems yet. 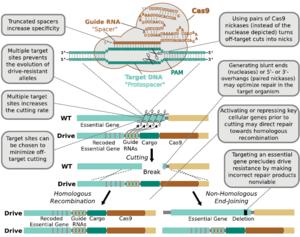 (Click to enlarge) Figure 3. See below for legend. Source

Enter CRISPR/Cas9. This elegant ‒ and also much hyped ‒ molecular 'toolkit' will probably make the design of gene drives much easier (STC's emerita Merry Youle con­si­der­ed CRISPRs earlier here, here, here, and here). In contrast to the HEG-approach, the sequence specificity of the Cas9 nuclease is not an intrinsic property of the nuclease itself but is provided by a short and easily 'designable' guide-RNA. Thus, any desired gene can be targeted with relative ease. In their recent paper, Esvitt and colleagues discuss pros and cons in depth, and they don't overlook the bioethical implications of any possible ap­pli­ca­tion of gene drives based on the CRISPR/Cas9 technique outside the lab (Figure 3). And finally, they propose safeguards that can, in principle, reverse gene drives already spread in nature ‒ but this would need another blog post to explain in detail...

Legend to Figure 3. Technical advantages of RNA-guided gene drives. Clockwise from lower left: The targeting flexibility of Cas9 permits the exclusive selection of target sequences with few potential off-targets in the genome. Targeting multiple sites increases the cutting frequency and hinders the evolution of drive resistant alleles, which must accumulate mutations at all of the sites. The Cas9 nuclease is can be quite specific in the sequences that it targets; fruit flies do not exhibit notable fertility or fitness defects resulting from off-target cutting when both Cas9 nuclease and guide RNAs are expressed in the germline. Choosing target sites with few or no close relatives in the genome, using truncated guide RNAs, employing paired Cas9 nickases instead of nucleases, or utilizing Cas9-FokI fusion proteins can further increase specificity. Several of these strategies can reduce the off-target mutation rate to borderline undetectable levels. The frequency at which the drive is correctly copied might be increased by using Cas9 as a transcriptional regulator to activate HR genes and repress NHEJ genes. By choosing target sites within an essential gene, any non-homologous end-joining event that deletes all of the tar­get sites will cause lethality rather than creating a drive-resistant allele, further increasing the evolutionary robustness of the RNA-guided gene drive. Other options include using distinct promoters and guide RNAs to avoid repetitiveness and increase stability or employing newly characterized, engineered, or evolved Cas9 variants with improved properties.