We list here what we posted in the previous half year. We hope you find this useful. 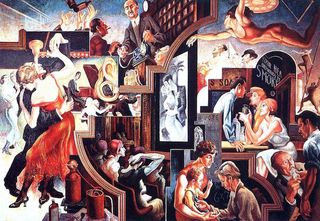 The Social Life of Microbes

Symbiont Exchange in the Aphid·Buchnera Symbiosis, Part 1.
by Christoph Weigel
The aphid-abundant bacterial endosymbiont Buchnera has company. Christoph tells us that some aphids carry a yeast instead and have done so for 40 or so years. Why the swap? Good question.

Symbiont Exchange in the Aphid·Buchnera Symbiosis, Part 2.
by Christoph Weigel
One way to study bacterial endosymbionts would be to exchange one for another in the lab. Christoph describes how this has bene done in the Moran lab, using microinjections of different strains into aphids at the right stage of development. The result has been greater heat resistance of the host. What else can we expect?

Kiss and Make Up: Myxococcus xanthus demonstrates bacterial cooperation
by Ada Hagan
U. of Michigan grad student Ada tells us of an unusual talent of myxobacteria, namely their ability to fix up damaged outer membranes by a bidirectional swap of lipopolysaccharide between cells. The Wall lab showed that two membrana proteins are involved in effecting what the call Outer Membrane Exchange. They think that this process may help relay new environmental information in order to rapidly adapt to new conditions.

On the Origin of Truffle Aroma – A Snippet
By Elio
Ah, truffles. Who do you think imparts their aroma? If you guessed the bacteria within them, you would be right. But this works only for those compounds that are less commonly found. As I said, "Go figure."

Who Invented Agriculture, the Ants or the Bees? – A Snippet
By Elio
Some Brazilian bees cultivate fungi in the hives, specifically in the waxy cells where the larvae develop. These fungi are used for food by their larvae and, notably, for the purpose of preserving the food supplied by the worker bees.

Megastructures: Defense Fortifications of Bacillus subtilis for Protection from Myxococcus xanthus
by Veronica W. Rowlett
U of Texas (Houston) Graduate student Veronica tells us that Bacillus subtilis makes not only biofilms but veritable castle-like structures in defense to predation by myxobacteria. Aux armes, citoyens…

Your Operating System on a Thumbdrive – A Snippet
by Christoph Weigel
Vital genes encoded just on a plasmid? Meet a cousin of the rhizobia whose ribosomal RNA genes are carried on a plasmid only. Don't let go of it, Aureimonas!

Model for DNA Segregation in 1963.
by Nanne Nanninga
Prof. Nanninga takes us on historical tour of chromosome segregation in bacteria. Interesting, how convoluted this question has turned out to be. For instance, is the membrane "in" or "out?" Currently, it’s out, but has the last word been said?

E. coli Can Be Taught to Make Intracellular Vesicles, But So What?
By Elio
Reported earlier in this blog has been the extraordinary finding that just cloning the gene for the euk membrane protein caveolin makes E. coli fill up wall-to-wall with vesicles. This strange phenomenon has now been put to bioengineering use to make two neuronal membrane proteins.  As we said, buy stock in caveolin.

Dine in or take out?: The dilemma of the mixotroph
by Rachel and Elie Diner
Mixotrophs, anyone? These are microbes that can live as autotrophs or heterotrophs. Some dinoflagellates are fine examples of such a dual skill, but so is the marine cyano, Prochlorococcus marinus. Is this the reason why it is so abundant? Rachel is a grad student at Scripps Oceanography, Elie a postdoc at Scripps Research, both in San Diego.

A Rickettsia Takes a Walk (or Two)
by Monika Buczek
Monika, a grad student at City University of NY, tells us how a Spotted Fever rickettsia uses not one but two mechanisms to induce host actin to propel it within the cytoplasm of an infected cell.  One of these makes them move in circles, the other in straight lines. There must be a good reason. 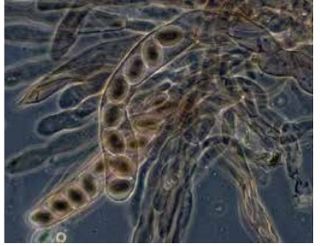 Life in a Sea of Gradients
by Brandon P. Kieft
Oregon State grad student Brandon deals here with the intricacies of life in the ocean, especially regarding the patchiness of its microhabitats. The oceans are not a like thin soup but more like, if you wish, a distinctly heterogeneous dilute minestrone. This is reflected in the genetic heterogeneity of the abundant marine bacterium, Prochlorococcus.

Body Size Allometry and the Politics of Prokaryotes
by Tracey McDole Somera
Tracey, a postdoc at Scripps Oceanography, introduces us to allometry, the study of the scaling of organismal attributes that can be used, for example, to determine the relationship of the number of intestinal bacteria to the volume of the gut.  Perhaps not unexpectedly, the relationship is pretty linear, which tells us that the numbers of microbes may be limited by the gut’s volumes.

The Transcriptomic Motion Picture of Marine Microbes
by Susan S. Golden, with help from students of The University of California – San Diego BioClock Studio
Who does what, where, when in the ocean can be studied with a free robotic "go with the flow" drifter, which carries out in situ transcriptomics. Guess what, bacteria other than the ones known for their circadian rhythms turned out to have them too! Is this due to cross-talk between species?

It's About Time to Consider Osedax
by Christoph Weigel
Osedaxes are mouthless and gutless worms that chomp away at whale carcasses that sank to their depths. They carry bacteria within bacteriocytes (think insects). The worms somehow incorporate collagen and cholesterol, which the bacteria feed on. Christoph takes us on several detours of these organisms and their friends. All of these are distinctly fascinating.

Marine Vibrios and Climate Change
By Elio
At the 2015 ASM General Meeting I heard Prof. Pruzzo from Genoa give a talk on an amazing collection of oceanic samples that includes plankton-attached vibrios. These sometime pathogens have increased in number pari passu with the rise on water temperature. Climate change is a distinctly microbiological topic. 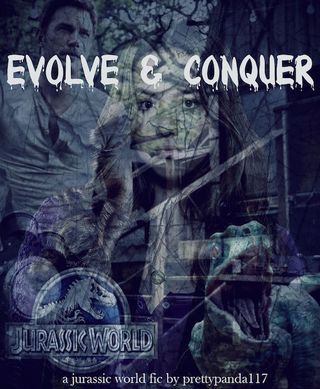 Sex And Evolution, Vibrio Style
by J. Jeffrey Morris
Marine vibrios exchange genes with gusto but, as Jeffrey Morris discusses, they do it more often with neighbors in the same habitat. The transfer agents are lysogenic viruses plus plasmids. But closeness between cells is not the explanation, as the transfer agents are more common among free living bacteria than particle-associated ones. The reason may be that the pathways involved are probably useful under certain conditions and not others.

"Evolution? Who needs it?"
by Marcia Stone
Science writer and esteemed contributor to STC, Marcia writes about Lokiarchaeon, that unexpected archaeon with eukaryotic genes for membrane trafficking and remodeling. Is it a candidate for an ancestor of eukaryotes? Ask a Vogon.

A Class Asks Questions...
by Yina Cobián, Alan Du, Kanika Khanna, Neeraja Vegesna, Chunghoon Woo, and Asami Yamamura
The Lokiarchaea did not escape the attention of the students in the UCSD/SDSU Integrative Microbiology grad course (led in part by Elio). They asked a bunch of questions, e.g., some related to how to study them in the absence of culturing them. The senior author of this work, Thijs Ettema, kindly provided his responses. A nice give-and-take. 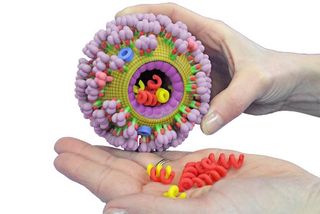 By the Numbers: Viral Burst Size
by Rob Phillips and Ron Milo
"Cell Biology by the Numbers" is a phenomenal resource for all biologist and this example proves it.  What governs the burst size of a virus infected cell? Is it the volume of the cell, i. e., how many viruses can occupy a sensible fraction of the cell volume? It almost looks that way.

Phage Responses to the SOS Response
by Merry Youle
Many phages ensconced as a prophage rely on their host's SOS response to warn them that their host is in serious trouble. Here Merry Youle shares a recently-discovered twist on that theme where the phage exploits the cell's LexA repressor to determine its own choice: lysis or lysogeny. 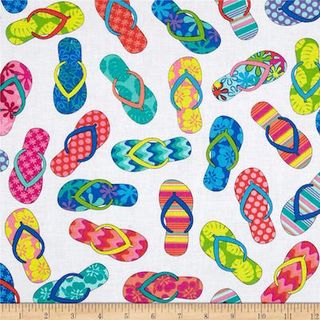 The microbial nature of humans
by Maureen O’Malley
Microbial philosopher O'Malley asks, among other things "if the collective of human and microbiota is a unit of selection in its own right." Well, they can each go their own way, can’t they? Up to a point. Maureen says, among other things: "Microbiome research and how it draws our attention to the organisms within us should not blind us to broader microbial ecology and evolution."

The ASM President Speaks: "Microbes Touch Everything"
by Tim Donohue
The ASM’s Past President explains that to make a real microbial renaissance all stakeholders in the microbial world (that’s everybody, no?) must collaborate and cooperate. He says: "Success in this endeavor is needed for us to truly understand how and why microbes touch everything."

Bringing the Microbial World into our Natural History Museums
by Scott Chimileski
What should go into a museum’s exhibit on the world of microbes? Scott, a postdoc a Harvard, has some interesting answers. About time museums gave ~50% of the planet’s biota their due, no?

Measuring Up
by Jamie Henzy
Fellow blogger Jamie delights in considering the largest and the smallest among bacteria and viruses. That’s some range of sizes!

The Louse And The Vaccine
By Elio
An amazing story of World War II is how the occupying Germans let scientist Rudolf Weigl work in occupied Poland to make a louse-based typhus vaccine. The lice were fed on human volunteers who fed the lice. Some of these people were saved in the process.

A Tale of Two Freds
By Elio
The University of Michigan was recently named by the ASM a "Milestone Site," where important things happened, microbiologically speaking. I had the honor of attending. The two Freds, by the way, are the Microbiology deportment’s founder, Frederick Novy, and the distinguished recent chairman, Fred Neidhardt. 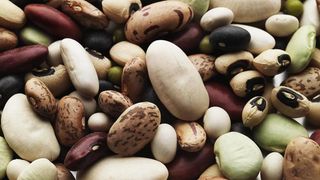 Pictures Considered #31. An Endosymbiont On Its Way To Becoming An Organelle? 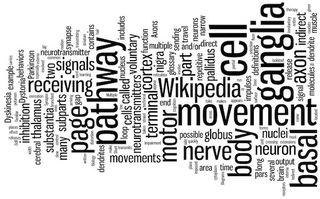 A Whiff of Taxonomy
(….and Pathogenesis): Akkermansia muciniphila
By Elio