« Gulliver and the Lilliputians, revisited | Main | Take your kids to the bugs on a Sunday afternoon Micropia, the world's only microbe zoo in Amsterdam » 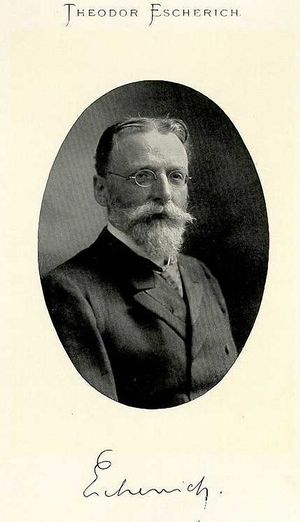 We, the lovers of that sour smelling E. coli have become amazingly familiar with the name E. coli K-12. This small cell has become the powerhouse of molecular biology and has been analyzed and discussed numerous times, including in the pages of this blog. The name 'Esche­ri­ch­ia'  from Professor Theodor Escherich of Vienna is fa­mi­l­iar (1), but where did that tag 'K-12' come from? Vague memories of bar conversations in meetings made us think it came from the hospital room K-12, where the strain was first isolated from a sick patient. But when we asked our senior luminaries*) of E. coli, we were told that it was either from an identifying antigen (K12?), or simply a stab located in drawer K slot 12. We were intrigued and decided to follow the trail...

Barbara Bachmann's chapter in the E. coli bible was the first place to look (2). There it states: " Escherichia coli K-12 was isolated in the fall of 1922 from the stool of a convalescent diphtheria patient in Palo Alto, California, by Blair. In 1925, the culture was deposited in the strain collection of the De­part­ment of Bacteriology at Stanford University, where it was given the designation "K-12". Strain K-12 gave positive results in the standard tests being used for the identification of E. coli and was used for many years in the teaching laboratories of the de­part­ment as a typical example of E. coli. This culture is still maintained in the department collection in stab cultures of nutrient agar, which are transferred from time to time (B. A.D. Stocker, personal communication)" (2).

Bachmann then describes, "The W prefix was used by J. Lederberg and collaborators at the Uni­ver­si­ty of Wisconsin to designate mutant strains. They used the prefix WG (Wisconsin Genetics) to designate wild type strains: E. coli K-12 was designated WG1, and all other WG numbers referred to non-K-12 strains in their system. The prefix Y was used in the laboratory of E. L. Tatum at Yale University in the 1940s. The very earliest strains, those produced by Gray and Tatum at Stanford University, were given only number designations."

Learned a lot yet still a dead-end.

We then asked the Encyclopedia of E. coli, i.e., Peter Karp from EcoCyc, who referred us to the de­scrip­tion of K-12 by Lederberg (4), yet again no mention of the elusive name K-12.

This time pursuing a historic route, we looked into "The History of Molecular Biology" by Michael Morange, who gives a detailed description of how Lederberg acquired E. coli from Tatum. Here I learned how lucky Lederberg was in choosing that very vial to conduct his experiments on genetic exchange in bacteria – most wild E. coli strains don't carry out conjugation, but K-12 does. E. coli K-12 also carried with it a lambda prophage – in other words: it was a lambda lysogen – and har­bor­ed plasmids, qualities that serendipitously opened the path to modern molecular biology. But again, no mention of the source of the name K-12 (5). Michael Morange responded to my inquiry on the origin of the name K-12 with "It is a question I never raised".

When we asked the board of E. coli stock center at Yale (CGSC) for their help, the capsular antigen theory was weakened. John Wirtz said that E. coli K-12 does not make K antigens but instead co­la­nic acid (6). Further, the nomenclature and typing of E. coli by K-antigens begins much later, and clinical isolates of E. coli that express the K-antigen seem to have acquired it via a horizontal gene transfer from Klebsiella. A look at the literature on K antigens puts this theory to rest – in a review of K and O antigens of E. coli, Ørskov et al. write: "In 1945, Kauffmann and Vahlne (7) introduced the term K antigen (from the German word for capsule, Kapsel) as a symbol to denote either en­ve­lo­pe or capsule antigens, of which three different types had been described, the L, A, and B an­ti­gens ... The famous "K-12" strain used by molecular biologists and biochemists should not be mis­taken for the test strain for K antigen K12 (Su65-42)" (8).

Sadly, our trail ends here. Perhaps the trick is to change the question? We then asked Prof. Bill Studier where the name of E. coli B came from. Unlike K-12, the answer was clear, "Delbrück had been in the habit of using B for Bacterium as the name for whatever bacterium he was using as host for whatever phage he was studying, referred to as P. In the Delbrück and Luria 1942 paper (9), they used an E. coli strain and two phages Luria had obtained from Bronfenbrenner, who re­ferred to the host as PC and the phages as P28 and PC. Delbrück and Luria referred to this host as B and these two phages as alpha and gamma. They isolated from B a host that was resistant to phage alpha and another resistant to phage gamma, naturally referring to those hosts as A and C".

In summary, some poor human got sick. A doctor collected samples from the patient and some­one in the Bacteriology Department at Stanford (Dr. J.E. Blair?) isolated an E. coli strain from it and stored it away. Many years later, Tatum (then at Stanford) used it to isolate auxotrophs. Lederberg then acquired it from Tatum and conducted some amazing genetics with it and shared the stabs with many labs, resulting in its current fame.

We still do not know of the origin of the label "K-12". Perhaps by crowdsourcing this naïve ques­tion here in Small Things Considered, we may together find the answer?