A common experience among old-time researchers is that certain results from their lab had hit a wall, there to lie dormant and forgotten. Though interesting at the time, the results were not fol­lowed up by their creators nor by friends and competitors. There are many reasons for this, per­haps the most common one being that the technical tools available at the time were insufficient for further pursuit. One looks at these experiments with some wistfulness. Who doesn't have the urge now and then to warm up such leftovers?

I have such a story to tell (several, in fact, but one is enough for now). Let me start with a 1972 con­clusion from the work of a Ph.D. student I mentored, Betsy Green. We proposed that the bac­te­ri­al membrane is made up of some 250 phospholipid-containing units, each of which persists singly through subsequent growth and cell division. We determined this for both E. coli and Ba­cillus megaterium, so this is not a Gram-negative/Gram-positive distinction. Think about it: this conclusion suggests that membrane phospholipid molecules are held together in an indissoluble manner in little "islands," ostensibly by associating with specific membrane proteins. 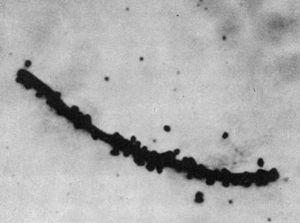 Figure 1. A filament of E. coli BUG-6 that was pulse-la­beled with [3H]glycerol. Cells were la­beled for 0.1 generation at 30°C. Label was re­moved and cells were suspended in medium at 40°C where they grew as filaments. No con­cen­tra­tion of label was seen. Source

A bit of even older history first: One of the original ques­tions about how the membrane replicates derived from the replicon model, which postulated among other things that after replication, sister chromosomes bind to the membrane at both sites of the septum of rod-shaped bac­te­ria. As the result, the two chromosomes would se­pa­rate from one another and be pulled into the daughter cells. This would work readily if the membrane was syn­the­sized from the middle of the cell outwards. However, a number of experiments consistently showed that this is not the case, and that, in rod-shaped bacteria at least, the membrane is assembled by intercalating new ma­te­ri­al at many sites along the cell (for examples., see here or here). So much for this elegant and simple model.

Leaving the topic of chromosome segregation aside, I became interested in how the membrane of a mother cell is actually apportioned among its pro­ge­ny. The previous studies that suggested a dispersive mode were carried out over for about 5 generations. The question thus arose: does the membrane disperse further, ultimately into its constituent phospholipid molecules, or are there larger units of conservation? If one looked at the progeny of a cell for more than 5 generations, would one find that something larger than a single lipid molecule was derived from the mother cell?

Many lines of evidence point to the existence ‒ even the necessity ‒ of heterogeneity in cell mem­branes, including bacterial. In eukaryotic cells particularly, this brings to mind lipid rafts, com­plex­es that contain lipid distinct from those of the rest of the plasma membrane. There is also an emerging literature on functional mi­cro­do­mains in bacterial membranes and lipid rafts. Some of these domains are part of the membrane that is involved in septation or in the close packing of lipids in the curves of bacterial poles. Mi­cro­do­mains and lipid rafts have been reviewed here, and more recently here. But, as I understand it, I may be talking about something different. Mi­cro­do­mains and lipid rafts are portions of the membrane whereas here we're dealing with all of it. Of course there may be a connection between the two, but allow me to deal with our experiment as if these were separate matters.

Here is what Betsy did: she grew E. coli in a medium containing very high specific activity tritium-labeled glycerol*) for 10 generations. Glycerol is selectively incorporated into bacterial phos­pho­li­pids, ergo the radioactivity becomes a marker for the cell membranes. She then grew these la­beled cells in a medium lacking the la­bel for another 12 generations. At each one, she sampled the culture and made radioautograms by placing the cells on a slide, covering them with photographic emulsion, and waiting for enough time to elapse so that photographic grains adjacent to each cell became sensitized by the tritium's beta rays (some of the experiments required waiting for a year!). After developing the slides as you would a photo negative, Betsy counted the distribution of photographic grains per bacterial cell. Figure 2. A schematic diagram of the dis­tri­bu­tion of photographic grains seen on or around the descendants of a labelled cell grown in un­labeled media. In reality, to make the grains countable, the preparations were exposed to the photographic emulsion for a length of time proportional to the generation number.

For about seven generations, all the cells were sur­round­ed by grains: all the cells were labeled, although to an ever-decreasing extent. But after 7 or so generations, some of the cells were seen to be unlabeled, the pro­por­tion of these being a direct function of the number of generations. The longer the cells grew, the more cells were unlabeled. A little math by a colleague, Arthur Koch, told us that this result was consistent with there being some 250 units of conservation in the membrane. In other words, the membrane appears to be made up of 250 of such units. Their function and nature are anyone's guess but it is reasonable to assume that they consist of lipid molecules tightly bound to small protein complexes. To illustrate what one would expect if there were no conservation and if the ultimate units were individual phospholipid molecules, some of the the founder cell's original label would be present in the pro­geny cells for over 20 generations.

Giving credence to our result was that a similar conclusion had been arrived at about a year ear­li­er in the lab of C. Fred Fox. They used a totally different technique: shifts in the buoyant density of membranes due to the incorporation of a heavy lipid precursor, bromostearate. In agreement with the results obtained by other methods, they found that after shifting from light to heavy me­di­um, the membrane preparations did not sort themselves out into a light and a heavy fraction, as would be expected if the membrane replication took place at one or a few sites. But what was re­le­vant to us is that they calculated that the largest piece of membrane to be conserved was 50 nm in length, consistent with our findings.

So what meaning does this old experiment hold for us today, and could we take it a few steps fur­ther? First and foremost, let me admit that despite our best efforts, the work may have been in­cor­rect for reasons that escape us to this day. But assuming that the results are correct, what else could we have done? We could have separated the inner and outer membranes of E. coli, which could have been interesting. However, we were not motivated to do it in part because we got the same result with the Gram-positive Bacillus megaterium. At the time, we considered studying the nature of the conserved subunits could be studied by labeling the cells with heavy density pre­cur­sors (a la Fox perhaps), growing the cells in unlabeled media, and then breaking up the mem­branes into small fragments. Like with the cells in our experiment, the dense fraction should de­crease as the proportion of the. But we became stuck on the problem of how to break up the cells in a way that produced fragments corresponding to the conserved subunits rather than being the result of random breakage. We had no idea of how to do it, and still don't.

The paper describing this work was authored by Betsy and I for PNAS in 1972 and, as per PubMed, has been cited a measly 16 times. (For what it's worth, related papers published around that time fared no better.) So, this work fits nicely in this category of Leftover Science. Anybody for warming it up? After all, this work suggests that the bacterial membrane is studded like a cookie, chock-full of tiny chocolate chips. Sounds worth investigating, no?

*) I have a little story to tell about the tritium labeled glycerol. At the time, this was not commercially available so I called a company in the business that happened to be located near our lab at Tufts Medical School in Bos­ton. Would they make perhaps 100 millicuries of it for us? Of course, no problem! After a week or so, they called to say that they had it and would we come and pick it up. No charge! I asked Betsy to walk the few block to get it. She came back carrying in her hand a bottle containing 3 curies of the world supply of tritiated glycerol! Luckily, as she knew, the beta emission from tritium is so weak that it wouldn't begin to go across the glass walls of the bottle. Still...