« Raindrops Keep Falling On Their Heads (Thanks To Mushroom Spores, That Is) | Main | Gulliver and the Lilliputians, revisited » 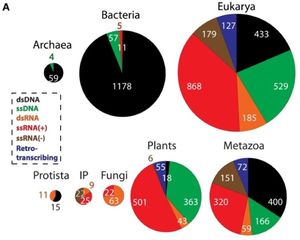 This picture should hang as a poster in every mi­cro­bio­lo­gi­cal lab that is concerned with vi­ruses (and which one isn't, one way or another?). It shows how diverse the vi­ruses that affect hosts of the three domains of life ac­tu­al­ly are, both in morphology and replication strategy ‒ the nucleic acid type of their genetic material is indicated in the figure but their replication strategies are even more diverse. I confess, this is something I had not fully ap­pre­ci­a­ted.

To quote the authors of the paper (Nasir, Forterre, Kim, and Caetano-Arrollés): "The distribution of the as­so­ci­a­tion of viral replicon types with cells is extremely biased. For example, RNA viruses are com­ple­te­ly absent in Archaea and are rare in Bacteria. In com­pa­ri­son, vertebrates host numerous RNA and retroviruses. Surprisingly, dsDNA viruses are rare in plants while dsRNA viruses are abundant in fungi. Similarly, retroviruses are integrated into the ge­nomes of multicellular eukaryotes but are completely absent in the microbial genomes. In other words, specific relationships exist between the type of viral replicon and the host range."

If variety is the spice of life, then, by this criterion, viruses are very much alive.

Legend to Figures
The abundance and diversity of viral lineages in the domains of life. A Pie-charts describe the abundance of dsDNA, ssDNA, dsRNA, ssRNA(+), ssRNA(−), and retrotranscribing viruses in Archaea, Bacteria, and Eukarya, and within the major eukaryal divisions. Genome data from 3660 completely sequenced viral genomes corresponding to 1671 dsDNA, 610 ssDNA, 883 ssRNA(+), 179 ssRNA(−), 190 dsRNA, and 127 retrotranscribing viruses were retrieved from the Viral Genomes Resource (April, 2014). Additionally, two ssDNA archaeal viruses were identified from the literature (Pietilä et al., 2009; Mochizuki et al., 2012). Viruses that were unassigned to any order, ge­ne­ra, or species and unclassified viruses were excluded from sampling. Viruses were broadly classified ac­cor­ding to host preferences into the following categories: Archaea, Bacteria, Protista (animal-like protists and brown algae), Invertebrates and plants (IP); Fungi (all fungi and fungi-like protists); Plants (all plants, green al­gae, and diatoms), and Metazoa (vertebrates, invertebrates, and human). Host information was available for roughly 99% (3633) of the sampled viruses. Pie-charts are proportional to the size of each distribution. 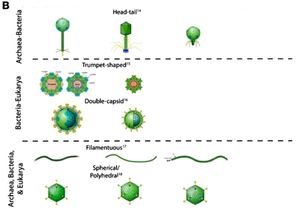