Raindrops Keep Falling On Their Heads (Thanks To Mushroom Spores, That Is) Figure 1. Lactarius hygrophoroides, a mush­­room included in this study. I frequently found specimens of this delicious crunchy mush­room in a woods near where I lived in Newton, MA. Source

I have two purposes in discussing a recent paper from the lab of mycologist Nik Money. One is to present a notion of the way mush­room spores may contribute significantly to rain making. The other one is introduce a noteworthy wrinkle in electron microscopy (previously unknown to me), namely the ability to look at wet objects under the electron beam. These two topics combine in this paper.

Mush­room spores are released into the atmosphere every day by the billions. In weight, this amounts to 50 million tons per year or, if you wish, about 1000 spores per square millimeter of the earth's surface. Together with pollen, bacteria, and other biological particles, they serve as nuclei for cloud formation and, therefore, rain (we leave the intriguing story of atmospheric bacteria for another time). Fungal spores come in different sizes but a diameter of 5 ‒ 8 µm is rather typical. This size is small enough for the spores to be carried aloft even by gentle wafting breezes. Measurements made in Brazil show that fungal spores account for about 35% of the total particles of this size range. The figure is higher and varies less during the year for the heavily forested tropics than elsewhere. The atmosphere may be a thin soup all right, but enough material can be gathered for analysis using high capacity filtration techniques and long sampling times (one week is typical). Interestingly, in the samples so collected, mannitol can be used as a suitable biomarker for the presence of fungal spores and, of course, so can DNA. In fact, the DNA analysis shows that about 2/3 of the fungal spores are from Ba­si­dio­my­ce­tes (the majority of mush­rooms) and about 1/3 from Ascomycetes (which include morels and some other mush­rooms); see here. So, mush­rooms are indeed the largest source of fungal spores in the atmosphere. The species found are quite diverse and include allergenic ones (not a surprise for people suffering from such allergies) and human and plant pathogens (e.g., Candida, Puccinia or cereal rust).

It doesn't make much difference here, but mush­room spores are made sexually, those of mold largely asexually. And their mechanisms of release into the air are different. Asexual spores ‒ conidia they're called ‒ are released passively, that is, they simply detach from the hyphae that make them and are limited in their dispersal. Sexual spores, on the other hand, are forcibly ejected from their maternal cells and are immediately swept out by air currents. 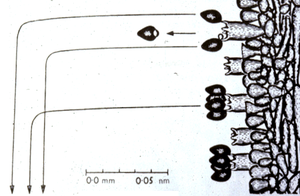 Figure 3. The trajectories of spores being ejec­ted from the gills of a Ba­si­dio­my­ce­te mush­room. Notice the sharp break in the curve (so­me­thing a baseball pitcher would dream of!). From AHR Buller, Researches on the Fungi, Vol. II, 1922.

The mechanism of spore release in both the Ba­si­dio­my­ce­tes and the Ascomycetes defies the imagination. Ba­si­dio­spores, as they're called, are ejected from the "gills" or pores found on the underside of mush­rooms with an astounding force of over 10,000 x g and an initial velocity of close to 2 meters/second! Of course, the initial velocity is sustained for a very brief time, or else the spore would hit the opposite gill. In fact, the trajectory is interesting: the spores travel horizontally for a short distance, they then "hit a wall", when their momentum cannot over­come the viscosity of air. At this point, they drop ver­ti­cal­ly, to be caught by air current and carried over a long distance. The mechanism of release depends on the formation of a water droplet at the base of the still attached basidiospore. When this droplet increases in size due to the secretion of hydrophilic substance such as mannitol, it eventually collapses, transferring its center of gravity outwards. This impels the spore to take off at prodigious ‒ if sustained extremely briefly ‒ speeds.

A detour into the Ascomycetes. Although they do not tend to make as many large fruiting bodies – i. e., mush­rooms – their spore discharge mechanisms can be even more spectacular. Impelled by pressurization, the spores of Pilobolus can travel up to 2.5 meters. Those of Sphaerobolus, aptly called the cannonball or artillery fungus, impel their spherical spores to travel over a 6 m. horizontal and 2 m vertical distance. The force is supplied by turgor built up by an increase in osmotic pressure in the spore-bearing tissue by conversion of glycogen into sugars. But overall, spore discharge over distances is more common among the basidios than the ascos.

Nice, but what does this have to do with rain formation? The proposal from Money's lab is an explanation for the way fungal spores make for nuclei effective in the formation of raindrops. Before considering the possible mechanism, let's do some numbers. Are there sufficient spores in the atmosphere to make a difference? The answer is yes. Fungal spores are dispersed every year to the tune of 50 million tons, enough to cover each square mm of the planet with 1000 spores. They are not distributed evenly, with forested regions accounting for the greater share of the production. So, the numbers seem to add up. 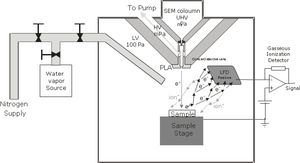 Figure 4. Schematic of the business end of an ESEM. Source

How to show how fungal spores make rain? The in­ves­ti­ga­tors measured the amount of moisture that ac­cu­mu­la­tes on fungal spores at different levels of moisture. For this, they used a not so novel but relatively underused (and to me, previously unknown) variation on the elec­tron microscope, namely one that allows to look at wet objects. Called the Environmental Scanning Elec­tron Microscopy (ESEM), this machine overcomes the problem of conventional EMs, namely that the objects have to be dehydrated. A webpage by its main developer, GD Da­ni­la­tos is found here. In the ESEM, the specimens are placed in a small chamber that can be vented with gases, including water vapor. For this purpose, the EM needs considerable modification with regard to pumps and the detection system. It is commercially available, apparently not cheap. Microbes have been studied with the ESEM (see here) but best I can tell, it has only had limited use in microbiology. But this paper does it justice. 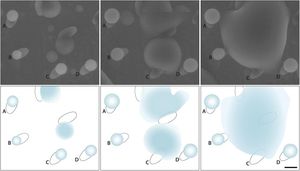 Figure 5. Droplet formation on basidiospore of Suillus brevipes in the ESEM at 101% RH.(A-D) Spores are orientated with adaxial surface fa­cing away from surface of the specimen stub, allowing observation of droplets growing from this hygroscopic region of the spore. Note mer­ger of droplets in second and third panels. Scale = 5 μm. Source

The authors collected 8 species of mush­rooms and placed the spores in the ESEM and altered the relative humidity (RH) in the specimen chamber. Droplets of water formed on the spores at RH values of 101 and 102%. Interesting is that these droplets formed precisely on the sites on the spore where they are seen before being discharged, namely the peduncle where the spore sticks to its mother cell and on its adjacent (adaxial) face. The drops evaporated when RH was lowered below 100%, only to reappear when RH was once again increa­sed. In time, the water droplet on the face of the spore reached large dimensions (13 µm). The authors also looked at the behavior of spores of basidios such as puffballs that do not forcibly discharge them. Here, the water makes a thin shell around the spores with no specific localization, suggesting that there are different ways whereby spores induce water droplets to form.

Does this benefit the mush­rooms? The authors state: "There is no adaptive significance to the putative effect of spores on cloud formation. It is a consequence of the dispersal mechanism that happens to benefit the fungus beyond its effectiveness at distributing spores. If changes in climate reduce rainfall in tropical ecosystems, the resulting inhibition of fungal growth and spore release may exacerbate the frequency of droughts through this unexpected feedback loop". I guess one could argue whether this feedback loop has adaptive significance. Let me put it this way: No rain, no mush­rooms!

This paper was discussed in a recent podcast, of This Week in Microbiology No. 118.