Take your kids to the bugs on a Sunday afternoon – Micropia, the world's only microbe zoo in Amsterdam 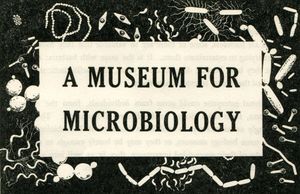 Figure 1. Otto Rahn's (1881−1957, do not con­fuse with the homonymous Nazi writer) appeal for a mu­se­um of "microorganisms in nature and ci­vi­li­za­tion." ASM Archives, by courtesy of Jeff Karr

"Nowhere in the United States can the public get a true conception of the role of microorganisms in nature and in our daily lives." These words, penned in the late 1940s by the German-American dairy microbiologist Otto Rahn in an appeal for a "museum of microbiology" would re­main true for several decades to come – at least if one thinks of a permanent institution devoted to presenting "microorganisms in nature and civilization", as Rahn had it (Figure 1). Since August 2014, the lacuna outlined by Rahn has been filled by Micropia, the "first museum of microbes", or, perhaps more fittingly, the first "microbe zoo". However, Americans will still have to cross the At­lantic to go see the microbes (at least for a few months more, it seems – see STC's recent post on microbes in museums by Scott Chimileski).

Micropia, located in central Amsterdam, is part of "Natura Artis Magistra". The somewhat aca­de­mic name ("nature is the master of art") does in fact not simply refer to the city's zoo, but to an institution covering "natural history" in the proper sense of the word – i.e. as collecting, ordering and showing both natural objects and artifacts, from the elephant to the mineral to planets. Thus, maybe it is only consequential that the idea to exhibit Chlorella & Co. was realized at a place at­temp­ting to present nature and civilization broadly, and whose director, Haig Balian, seems to think of Micropia as more than a "fun place" or elite entertainment; he seems to have a decisively political mission. Thinking of microbes, Balian mentioned the "interconnectivity of life", ecology, economy and things like climate change among his motivations. 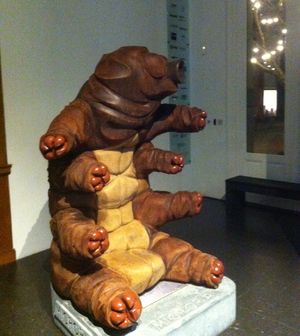 This, however, does not mean that Micropia is a dull pla­ce frequented by eighth graders on a Tuesday morning – on the contrary, when I got off the tram at Artis in late December 2015, the place was bustling with folks of all ages, languages and social constellations (strollers, teen­age lovers, elderly couples). Visitors entering the fancy renovated building of Micropia are greeted by the statue of a tardigrade (Figure 2) of human size, certainly the cuddliest of all "microbes" – the broad sense in which the term refers to "invisible life" here beyond all too rigid cell biological divisions is obvious. After a surprising ride in an elevator (the secret of which will not be spoiled for potential visitors reading this post) the exhibition opens with an immense wall painting of a tree of life – still very much tree and not network, but emphatically relativizing preconceptions of size, diversity and relevance in nature – things with claws and fur, or so the message through­out, represent but a tiny and rather conventional fraction of life. One could summarize the ex­hi­bi­tion as a tour through different aspects of microbial life – from the ecology/biodiversity corner (flasks of cyanobacteria and their contribution to atmospheric oxygen, immense Winogradsky co­lumns; Figure 3/4) to the wonder corner (microbial abilities – Physarum polycephalum finding its way through a maze towards an oat flake, luminous bacteria, to be shaken by the visitor in a dark cabinet) to the filth-and-hygiene section (the ecosystem of a toothbrush, live samples of rot, Petri dishes, a “scatotheque” – google the etymology for more, Figure 5). Then, there is the little helpers/”green gold” (degradation, biofuels, crop protection), as well as last (and somehow least!), the infection/disease corner. Which brings me to the presentation strategies. Whereas the medical section harbours rather conventional exhibits such as models of bugs, pills etc., the other sections veer onto new terrain. 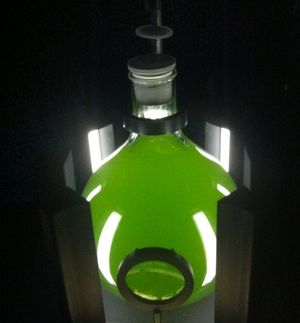 Figure 3. A display for algae. Photo by Mathias Grote

Many pieces of Micropia's exhibition transcend the limits of space and time to allow visitors to experience mi­cro­bes in new ways. According to Wiebe Sloot, head of Mi­cro­pia's la­bo­ra­to­ry, the long phase of planning included – among many other things – the design of user-friendly microscopes in cooperation with instrument makers. These allow pretty much anybody to gaze at the beauty of  live Spirulina or Volvox. The work of Micropia's lab, distantly similar to the main­ten­an­ce facilities of a zoo or a botanical garden, includes con­ti­nu­ous cultivation of the exhibits (for which novel me­thods of cultivation had to be developed) as well as routine pre­pa­ra­tions of samples put under the microscopes every mor­ning. So much for space – the boundaries of experiencing the empirical reality are transcended by exhibits such as video displays of the visible color-zone changes within a Winogradsky column over weeks. Here, Micropia has done truly ground-break­ing work and Otto Rahn, one may suspect, would have been delighted by the Dutch pioneers. 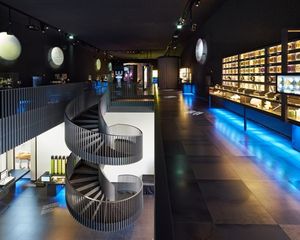 Spot-on for the historian of science in me, the mi­cro­bi­o­lo­gists themselves and their fumbling around with glass­ware, such as when working under a clean bench have been in­clu­ded as an exhibit (Figure 6). Observing Mi­cro­pia's lab in action through a window at the back of the room, we experience how research is part of the human culture just like art – and now think again of natural his­tory and the complicated name of Artis (European rea­ders may also be reminded of a car factory behind glass walls such as Volkswagen's installation in Dresden). But there's also more flashy stuff around: The "Kiss-o-Meter" (informing about the number of bugs transmitted by a kiss) sits prominently in the center of the exhibition hall, somewhat re­mi­nis­cent of a strongman game on a funfair. These all too sensational pieces may put off some vi­si­tors, but my observation was that kids of all ages seem to love them – one of the strengths of Micropia being that it offers very different displays to cater the needs and interests of a heterogeneous zoo audience.

Micropia's overall design as an exhibition is very much on the line with recent Science Museums – it is hands-on (even the walls, made of little cell-like balls), it engages all sen­ses (also the olfactoric, be prepared!) and it relies on light and sound design to create a specific atmosphere. The some­what eerie atmosphere created by blue lights and bubbling, oozing sounds evoke an "alien world" beneath our feet. And although this altogether makes sense, one may ask whether aspects of this design strategy could not also help to consolidate contemporary clichés of how microbes are re­pre­sented in the media, such as the ste­reo­type of uncanny, uncontrollable critters from a sci­ence fiction movie. But this is a minor point – Micropia allows taking home many other per­cep­tions of microbes (such as that of the useful, controlled bug in a biotech vat).

Why Amsterdam, why now?

Asking why "spaceship Micropia" has landed when and where it did leads us first back to the vi­sion of Haig Balian, who pursued the idea for more than ten years (and through a financial crisis). Balian is not merely a microbe fan for the sake of microbes, but he describes the mission of his brain child as being part of a "paradigm shift" on the social, technological and economic levels: "For years, nature has been neglected and subjugated to the economy. Society is experiencing a change of heart at the moment: we are becoming aware that we will have to behave differently towards the earth. We realise that climate change is causing economic damage. Part of the so­lu­tion lies in honing existing technology." 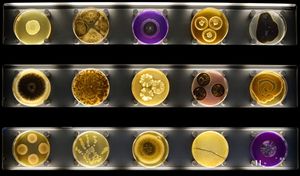 No less than a different concept of nature and a different way of living – that is what microbes are supposed to teach us. This brings me to another level of answering the question of why Otto Rahn's vision of a museum for microbes in nature and civilization was realized in the Ne­therlands: not only has the country been home to Leeu­wen­hoek (honoured with a replica of his microscope at the entrance), but also to the Delft School of mi­cro­bio­lo­gy, represented by figures such as Martinus Beijerinck (pioneering elective cultures, isolating what later became tobacco mosaic virus), Albert Jan Kluyver and Cornelius B. van Niel (who have explored common metabolic principles in microbes and macrobes; van Niel may also be known to Americans for his work at Stanford's Hopkin's marine station, and the famous mi­cro­bio­lo­gy course he taught to molecular biologists). 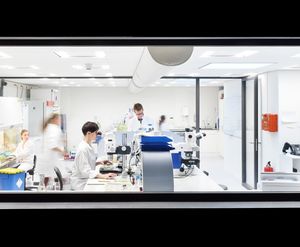 But I don't want to turn this into a history lesson: Let it simply be said that the environmental aspect of mi­cro­bio­lo­gy, as well as the idea of microbes pioneering "green technology" is all but new to our times and it has his­to­ri­cal­ly strong ties to the Netherlands. A microbe museum in vicinity to the Institut Pasteur in Paris or Berlin's Ro­bert-Koch-Institut, one may suspect, would have looked very differently (and would presumably never have be­come a zoo). Regarding the recurring vision of a mi­cro­bial, non-fos­sil economy, ultimately powered by the sun, one should add that Micropia cooperates with com­pa­nies active in these areas, for instance, to realize exhibits. As mi­cro­bi­o­lo­gy has always been interwoven with prac­ti­cal interests (e.g. Pasteur's early works on fermentation, similar stories could be told from Japan), this is neither surprising nor in itself to be criticized. Yet, one may flag this out in future more prominently in the exhibition in order to tell how the mi­cro­bial economy has been part of larger socio-political constellations, and ultimately, how microbes, as the most alien (think Archaea) and the most domestic (think yeast) creatures, have always existed both in nature and in civilization, or culture (pun intended). This may be achieved – here the author openly de­cla­res his own interests – by reflecting historically or philosophically on the science that made the microbial world accessible, microbiology, that is. However, these are all minor points to a suc­cess­ful and fasci­nating venture that will hopefully inspire natural history museums, zoos or botanical gardens around the globe to exhibit an heretofore neglected part of the biosphere. If you live in the Netherlands, take you kids to the microbes on a Sunday (and the grown-ups, too). If you live elsewhere, should you need an excuse other than sunflowers or tulips to go to Amsterdam, here you go! 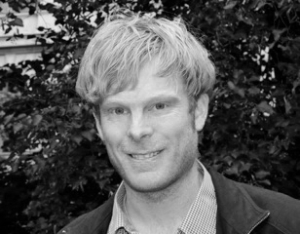 Mathias Grote is a microbiologist turned historian of science wor­king at Humboldt-University of Berlin. He has published on the his­tory of the 20th century life sciences (with a special focus on mem­branes, which kept him busy in the lab during his PhD). In his cur­rent project, he pursues the question of what happens to know­ledge once it becomes “old”, especially in taxonomy and classi­fi­ca­tion of microbes.