STC received an email these days by artist Lindsay Olson: "I found your web site through a blog connected with Cornell's Mycology department. I am an artist using science as the foundation of my studio practice. I created a body of work while I worked with the Chicago Water Reclamation District in Chicago and wondered if your readers might enjoy seeing my interpretations of various filamentous bacteria and protozoa involved in the activated sludge process. It may sound odd to say this, but I fell in love with science in the middle of a waste water treatment plant."  She con­­tin­ued: "...let me know if you would like to use the art to celebrate the work you all do with the mighty, tiny microbes!"

I have no idea where & when my co-bloggers fell in love with science but we certainly won't miss this chance to celebrate the small things. Disclosure: as a biochemistry undergraduate I fell in love with the small things during a one-year monitoring project of microbes – bacteria and fun­gi – in the exhaust fan (before/after filtration) of one of the two huge waste separation facilities in Berlin, Germany. Lindsay Olson, who teaches textiles at Columbia College Chicago, says about her experience at the Metropolitan Water Reclamation District of Chicago: "the heart of the waste water treatment pro­cess occurs in the aeration tanks at the plant. Engineers, scientists and operators have duplicated the process na­ture uses to clean fresh water streams, lakes and rivers. What takes days in na­ture is condensed into mere hours. In the aeration tanks, a Shakespearean drama unfolds as armies of microbes live, die and vie for dominance in the activated sludge process. As the waste water flows through the treatment plant, microbes are concentrated in the aeration tanks. There they can clean billions of gallons of our waste water every day." 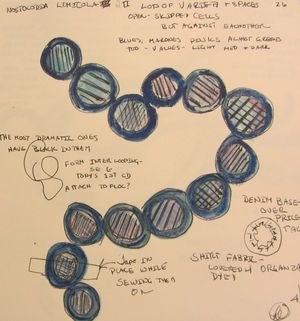 Art and biology have always been intimately entangled, at least since the Renaissance era in Europe. Ar­tists, in particular painters, contributed more to an un­der­­stand­ing of biological diversity than most of today's scientists are aware of. Just think of Captain James Cook who had the German naturalist Johann Reinhold Forster together with then 17-year-old son Georg among the crew mem­bers on his second Pacific journey. Or think of Charles Darwin who not only collected a wealth of bio­logical spe­cimen during his journey with the Beagle but made nu­me­rous excellent drawings himself. For mi­cro­bio­logists, being able to draw was a necessity if they wanted to com­mu­ni­cate and discuss their observations with others be­cause in the early days mounting cameras on mi­cro­sco­pes was technically out of reach. 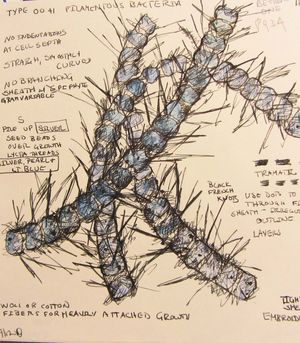 But today, with all the digital equipment microbiologists can use in microscopy – even achieving resolutions below the 200-nm limit of optical microscopy – the handycraft of drawing has dwindled. And so has the capabilty to use ones own hands for, yes, thinking. The work of Lindsay Olson reminds microbiologists that this is still possible, nevertheless. Fortunately, she was so kind to let us peek into her sketchbook. That compares well with reading care­fully the 'Materials and Methods' section of a paper! You can study her sketches in more detail by clicking on the pictures; a pop-up shows the magnified version. Do you see the carboxysomes in her 'bacteria 0941'?

You wish to learn more about the science-inspired art of Lindsay Olson? Don't miss her web­site then. Also, you find an interesting interview with her here, in which she talks about her ex­pe­ri­en­ces as 'artist-in-residence 'at the Fermi lab. Yes, she fell in love with even smaller things than bac­te­ria, neutrinos for example.