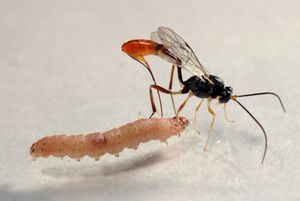 Is there any denying that pregnancy is a form of pa­ra­si­tism? The developing organism originates at least in part from outside the host (in sexually reproducing creatures, at least), and mediates the rerouting of nutrient supplies at the host's expense. In the case of mammals (and many other classes), where the parasite hatchlings will ge­ne­ral­ly require maternal care, a gentle balance has been struck that minimizes damage to the mother-host. How­ev­er, creatures that do not require this attention have a broader range of options. Some of the more cynical of these have been taken by parasitoid wasps. They have found a way to cheaply outsource the incubation and feeding of their prenatal progeny, by injecting their eggs into the larvae or eggs of other insects. Since the host is not required for post-birth parenting, it is entirely expendable, from the wasps' point of view, and evolution can skip the steps in which a delicate truce is forged between the two parties. Instead, the newly hatched wasplings simply eat the insides of their unfortunate host.

But there is a trickier aspect to parasitism than the feeding problem. When a new critter develops inside another critter, even one of the same species, the problem of self versus nonself arises. Whether incubation occurs in a mother-host or an alien-host, the developing organism, perceived as nonself, needs to be protected from the host immune system. Now consider this: who in nature has tons of experience at fight­ing immune systems? Of course! Viruses! These are immune-fight­ing machines, with a wide range of skills gained from experience on the battlefield: breaking and entering host cells, delivering toxic proteins, shutting down host defense mechanisms. In line with their penchant for outsourcing, parasitoid wasps have "hijacked" viruses expressly for these skills, employing them in the protection of their eggs from the immune system of the larval host. 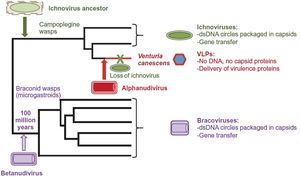 (Click to enlarge) Figure 2. Two virus genome in­tegration events have occurred during the evo­lution of cam­po­ple­gi­ne wasps: the first in­volved a genome, mak­ing it possible to produce ich­no­viruses (me­diating gene transfer), and the se­cond involved an alphanudivirus genome used for VLP pro­duc­tion (mediating the delivery of virulence proteins), which has re­placed the ich­no­virus in V. canescens. A betanudivirus was in­de­pendently acquired by a braconid wasp an­ces­tor and gave rise to bracoviruses (DNA de­li­ve­ry). Adapted from source

First, how does a wasp hijack a virus? Well, rather than a hijacking, it's more like the virus crash-lands into the wasp genome by accident. This can happen, for instance, if viral mRNA happens to be reverse-transcribed and in­serted into the genome by a host retrotransposon, or viral DNA is snatched by the host as a template during double-strand break repair in a germ cell. If the insertion becomes fixed in the population ("endogenized"), it is passed along vertically just like any other allele. Evidently the wasp genome, like other eukaryote genomes, has learned how to recycle good scrap metal from such crash­es. The proof? On at least three in­de­pen­dent oc­ca­sions, viruses that crash-landed into wasp genomes were subsequently salvaged for protection of wasp eggs from the host immune system, though the different scrap parts left over from these events resulted in slightly dif­fe­rent mechanisms of protection.

Salvage events one and two involve two different viruses in­fecting two different wasp lineages some 100 million years ago. The two viruses are members of the Polydnaviridae family, which in­fect insects. The virus that wound up in the genome of ichneumonid wasps is called an ichnovirus, and the one in braconid wasps, a bracovirus. Viral capsid genes from both of these en­do­ge­ni­za­tion events have remained intact in numerous wasp species. Capsids are the proteins that form a structure around the viral genome, which, in the case of the polydnaviruses, is circular double-stranded (ds) DNA. In both wasp lineages, the viral capsid genes and genes for packaging DNA produce chimeric particles that contain dsDNA circles carrying wasp virulence genes instead of virus genes. The process has been best characterized in the braconid lineage (and blogged about by Merry a few years back), and goes like this: specialized cells in the wasp ovaries produce and release the packed capsids, where they become associated with the eggs and are injected along with them into the larva-host. In an unlikely collaboration between former rivals, the particles then behave like viruses, entering the host cells and gaining entry to the nucleus, where the wasp DNA is transcribed to produce factors that suppress the host immune system. 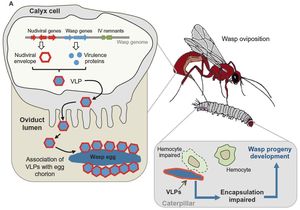 (Click to enlarge) Figure 3. VLPs consist of vi­ru­len­ce proteins of wasp origin wrapped in nu­di­vi­ral envelopes. VLPs are released into the ovi­duct lumen, where they become attached to the wasp egg. Once in the parasitized caterpillar host, VLPs confer immune protection to the egg by impairing capsule formation by the host im­mune cells. Adapted from source

Salvage story three carries a twist. As recently described by Pichon et al., the wasp species Venturia canescens (V. canescens) is an ichneumonid wasp and therefore is ex­pected to car­ry ichnovirus genes in its genome. However, instead of producing capsids, V. canescens produces a different type of particle, known as a "virus-like particle" (VLP). These are lipid vesicles carrying viral envelope pro­teins, and originate from the host cell when the virus buds out during infection. VLPs are like viral zombies, since they car­ry no viral genome. Instead, VLPs of V. ca­nes­cens are filled with wasp virulence proteins, not DNA, but otherwise follow the same strategy as the capsids, being injected along with the eggs into the larva-host. When hemocytes of the host immune system attempt to encapsulate the eggs, they are thwarted by the VLPs via a yet-to-be-elucidated mechanism.

Why does V. canescens produce VLPs instead of the capsids that its relatives produce? Where do the VLPs come from? By examining the transcriptome of the cells that produce them, the re­searchers were able to determine that the VLPs originate not from an ichnovirus but from a nu­di­virus. Nu­di­viruses are distant relatives of the main viruses of insects, baculoviruses. They form large, rod-shaped enveloped particles and car­ry dsDNA genomes that appear to encode well over a hundred genes. And yes, "nudi" means nude, in this case because, whereas baculoviruses car­ry a protective protein matrix, nu­di­vi­rus­es just let it all hang out. Among the transcripts they found were nu­di­viral envelope genes, but no transcripts for capsid proteins – in other words, a subset consistent with production of VLPs and not capsids. Analysis of purified VLPs by a type of mass spectrometry identified the toxic cargo delivered to the host-larva by the VLPs: an unappetizing blend of wasp proteins consisting of a peroxidase, a Rho GTPase (guanosine triphosphatase)-activating protein, and a metalloprotease. These are wasp virulence factors associated with immune protection of the eggs. 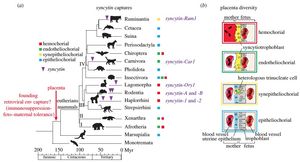 (Click to enlarge) Figure 4. Multiple syncytin gene captures and diversity of placental struc­tures in eutherian mammals. (a) Phylogenetic tree of mammals, with the four major clades of eutherians: (I) Afrotheria, (II) Xenarthra, (III) Eu­archontoglires and (IV) Laurasiatheria (adapted from Meredith et al. [61]). The four basic types of placentation are indicated by coloured squa­res (the colour code corresponds to that of the boxes that frame the images shown to the right). The time of insertion of the different syncytin genes identified to date is indicated. Branch length is proportional to time (in million years, Myr). (b) Schematic colour-coded re­pre­sen­ta­tion of the maternal–fetal interface in the four main types of placental structures. Pla­cen­tal types are classified from top to bottom in the order of decreasing extent of syn­cy­tia­li­za­tion and invasive properties. Source

Incidentally, the nudivirus from which VLPs are produced is of the genus alphanudivirus, whereas the bracovirus that produces capsids in the braconid wasps originated from a betanudivirus. The alphanudivirus has only been found in V. canescens so far, and is similar in sequence to pathogenic nudiviruses, suggesting that it was acquired much more recently than the 100 million-year-old ich­no­virus of the same wasp lineage. The implication? Two re­la­ted nudiviruses became endogenized in two different wasp lineages at different times. Though closely related, they left different salvageable parts – some envelope genes here, some capsid genes there. Yet even though this difference in available parts necessitated different mechanisms (VLPs versus capsids), each virus was co­opted by the host to perform the same function – to protect its eggs! And what about that third virus – the capsid-producing ich­no­virus carried by other ich­neu­mo­nid wasps? In the V. canescens genome, the researchers found only remnants of ich­no­viral genes, suggesting that once the alphanudivirus appeared on the scene, it re­placed the function of the capsid-producing ich­no­virus (now isn't that just like an alpha?), illustrating two in­de­pen­dent cooption events that evolved for the same purpose in one wasp species.

As remarkable as this story is, it is mirrored in a vertebrate lineage separated by vast evo­lu­tio­na­ry distances and likely closer to our readers' hearts – placental mammals. Mammalian genomes car­ry a heavy load of endogenous retroviruses (ERVs), resulting in plenty of virus parts to salvage. In particular, ERV envelope genes have been co­opted by numerous lineages of mammals, on in­de­pen­dent occasions, for their ability to fuse cells to form placental tissue that protects the fetus from the mother-host (note the common theme). These ERV envelope genes are called "syncytins" and there is even evidence that they can suppress the host immune system. Just as in wasps, dif­fe­rent co­opted viruses are associated with different strategies, in this case, suggested by the di­ver­si­ty of placental structures. Paralleling the wasp story even further is evidence of replacement of one co­opted ERV by a more recently acquired ERV, specifically in the primate and rodent lineages.

These parallels lead naturally to speculation on the role of virus cooption in the evolution of sex­u­al reproduction. How did the first sexual reproducers deal with the self versus nonself problem? The absolute dependence of viruses on a living host requires facility with entering host cells and thwarting host immune factors – skills needed in sexual reproduction. So, like companies who hire erstwhile hackers to build the firewalls to protect their data, perhaps early eukaryotes exploited viral sequences for their skills in allowing the protection of self from nonself required in sexual re­pro­duction. And from there you have the birds and the bees, as well as the wasps and the pla­cen­tal mammals.