« How Can Microbes Contribute to the "War on Cancer?" | Main | Pictures Considered #34 : The first look at the two membranes of Gram-negatives »

The Evolution of Death or: Is There Anything that the Eukaryotes Invented? 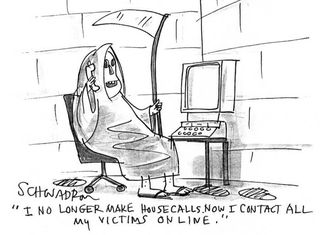 There is damage, as in a fender-bender, and then there is damage, as in "this vehicle is totalled." The best-studied response to damage in Escherichia coli (some would say, therefore in the world) is the SOS response – mediated by the recA-lexA locus – in which the cell attempts to repair damage to its DNA. However, recA-lexA is also involved in an altogether different damage-related response, this one similar in mechanism to apoptosis in eukaryotic mitochondria, and termed "apoptosis-like death" (ALD). Now, Erental et al. show that the factor that determines whether recA-lexA chooses SOS or ALD is the extent of damage that the cell encounters. In addition, they show that ALD has a whole slew of features in common with eukaryotic mitochondrial apoptosis, hinting at a prokaryotic origin of apoptosis, and furthering support for the endosymbiotic theory by which eukaryotic mitochondria originated as free-living prokaryotes.

First, a quick review of the role of recA-lexA in the SOS response. RecA is a co-protease and LexA is a repressor. Specifically, LexA binds to an "SOS box" within the promoter region of a set of genes that mediates the SOS response to damage, blocking access of the transcription machinery. Single-stranded DNA that accumulates during damage is the signal that activates RecA, which causes LexA to self-cleave, thus vacating the promoter and allowing transcription of dozens of “SOS genes.” The products of these genes mediate a coordinated damage control effort that involves recombination repair, excision repair, and cell cycle arrest – a ship docked in port for repairs. 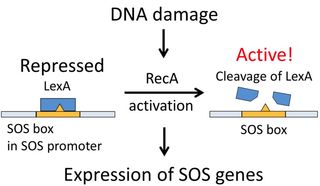 But alternatively, recA-lexA can launch a cell death program, ALD. In other words, recA-lexA makes a life-or-death decision, in this way mirroring the role of caspases – the cysteine proteases that carry out apoptosis in mammalian cells. What determines which pathway is chosen? To explore this question, the researchers inflicted varying degrees of damage on E. coli cells by exposing them to low and high concentrations of nalidixic acid (NA), an inhibitor of DNA synthesis. They then assayed features of the SOS and ALD responses under these conditions.

Here we must introduce a small fly into the soup, however. E. coli most often responds to damage by means of the mazEF locus, which codes for a toxin-antitoxin (TA) module. The products of mazEF had already been shown to block the ALD response, through inhibiting RecA activity. Since recA-lexA also initiates the SOS pathway, it did not surprise the authors to find that the SOS response was also blocked in E. coli strains that had an intact mazEF locus. Now, why evolve two different pathways to deal with damage, just to have both of them thwarted by mazEF? It's a mystery, but more on that later. The point is, the researchers had to use strains deleted for mazEF in order to characterize the ALD pathway.

That the extent of DNA damage determines whether SOS or ALD is chosen was suggested by a previous finding: membrane depolarization is a feature of ALD, and it occurs only under severe DNA damage. The authors extended this finding to two other features of ALD – DNA fragmentation and degradation of ribosomal RNA (rRNA). They found that both of these outcomes occurred only in cells exposed to high levels of NA; in other words, under conditions of severe DNA damage. In contrast, low NA concentrations led to the SOS response. And here's an interesting little tidbit: the endoribonuclease responsible for rRNA degradation during ALD has a homolog in mammals that is located where? In the mitochondria.

But how could the one locus – recA-lexA – respond in two quite different ways depending on the extent of DNA damage? The proposed mechanism hinges on the extent of degradation of the repressor, LexA. The authors found that under conditions of moderate DNA damage, LexA is partially degraded, enough to free up the promoter that controls expression of SOS genes. If damage is severe, however, LexA degradation is significantly higher, opening the possibility that even greater promoter access could lead to the transcription of additional genes. Microarray analysis confirmed this hunch. Specifically, under ALD conditions they were amazed to see the upregulation of a bunch of genes that are associated with the E. coli oxidative respiratory system: five tricarboxylic acid (TCA) cycle genes, seven respiratory electron transport chain genes, 12 Fe-S cluster genes, and a partridge in a pear tree (the last of which was thrown out as a seasonal artifact).

What's interesting about this set of genes is that they function in some of the very same systems that are affected in eukaryotic apoptosis. The authors coin these Edin (extensive damage-induced) genes, to distinguish them from din (damage-induced) genes of the SOS response. Think totalled car vs. fender bender. Just what are these Edin genes doing in response to severe DNA damage? Well, some of them appear to suppress the electron transport chain by dramatically decreasing activity of one of the electron transporters, complex II, in particular. Notably, complex II activity rises during the SOS response. In other words, the same locus can mediate two diametrically opposed responses, depending on the level of degradation of the repressor, LexA.

The involvement of ALD-induced genes in the oxidative respiratory system hinted at another possible similarity between bacterial and eukaryotic apoptosis – a role for high levels of oxygen radicals. Eukaryotic apoptosis is induced by oxygen radicals that are produced during mitochondrial membrane depolarization. In E. coli, the authors guessed that the steep decrease in complex II activity that occurs during ALD would lead to a decrease in the transfer of free electrons, resulting in the buildup of superoxides. These superoxides, in turn, could damage iron-sulfur clusters, leaving ferrous iron that could be oxidized by the Fenton reaction . . . and we all know what that means! Well, in case you've forgotten, or slept through biochemistry, oxidized ferrous iron results in the formation of hydroxide radicals (OH). These radicals damage DNA, promoting cell death. Such damage could in turn serve to amplify the ALD response by creating more ssDNA to activate RecA, resulting in even more OH, and so on until the cell suffocates under the toxic effects of the oxygen radicals.

To summarize, when DNA damage occurs in E. coli, recA-lexA "senses" the degree of damage based on the extent of RecA activation by ssDNA. Activated RecA causes the transcription repressor LexA to self-cleave, allowing expression of SOS genes. When damage is severe, however, the higher amount of activated RecA causes more extensive LexA cleavage, and an additional set of genes – the so-called Edin genes – is expressed. Some of these gene products interfere with the respiratory electron transport chain, leading to ALD, which the authors aptly describe as "an extreme SOS response"; extreme in that it leads to a grisly but intentional death marked by rRNA degradation, DNA degradation, and suffocation by toxic reactive oxygen species (ROS) and suppression of the bacterial respiratory complex.

Back to that fly in the soup: when mazEF is present, it blocks both the SOS and ALD responses, and instead induces alternative PCD pathways. Why have various PCD pathways that inhibit one another? One reason could be simple redundancy – a backup system to ensure that cells headed for self-destruction actually go through with it, and do not escape through a mutation in the intended pathway. Another reason may be to allow fine-tuning of a cell's response to various levels and types of stress.

And now please imagine the primitive endosymbiont having recently taken up residence inside an early eukaryotic cell. The living arrangement is going beautifully until the boarder experiences some stress and literally flies apart at the seams, leaving a mess of toxins in its wake. Such melodrama may have spurred the evolution of eukaryotic mechanisms to manage these meltdowns. And some of these control mechanisms may have been co-opted by the eukaryotic cell, evolving into the complex system of regulated cell death that is so essential to multicellular life.

"Death be not proud," for your origins may be quite humble!