Scars are not injuries… A scar is a healing. After injury, a scar is what makes you whole.
– China Miéville, The Scar

Last year Small Things Considered was hurt by the loss of one of our regular contributors, Marvin Friedman, who had a strong passion and joy for microbiology and this blog. I found myself looking through some of his featured pieces in remembrance and was intrigued by one that discussed de­ve­lop­mentally regulated prophage excision. This remarkable case involves reconstitution of a com­­pe­tence gene essential for bacterial phagosomal escape during mammalian cell infection by Lis­te­r­ia monocytogenes. 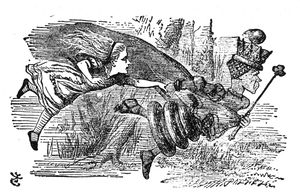 Figure 1. The Red Queen Hypothesis – named in reference to a scene from Carroll's 'Through the Looking-Glass', this describes an evolutionary system of species interaction where continuing a­dap­ta­tion is needed for one species to main­tain its relative fitness in relation to another, co- evolving species, such as in predator-prey in­ter­ac­tions. The intimacy of lysogeny re­pre­sents a situation where mutually be­ne­fi­cial traits, like a regulatory switch, could be selected for rather than simply increased antagonistic traits. Source

I wondered how many other cases are now known of such a compelling story of beneficial co-evolution. Mi­cro­biologists have discovered both viable phage and scars of DNA remnants from ancestral phage inserted within host genes. These coding interruptions prevent gene function, but in some cases host developmental pathways have evolved to controllably excise these sequences, these scars, to make a gene whole once more. (Please note this is quite distinct from CRISPR systems, which Merry nicely summarized here.) A 'Per­spec­tive' paper by Feiner et al. from October provides an ex­cel­lent update on this form of bacterium-phage interaction that the authors term an 'active lysogeny regulatory switch'.

The predation by phage on bacteria for viral replication exerts a pressure on the cell for the selection of defense mechanisms that, in turn, exert pressure back on the phage to adapt, in a classic Red Queen situation (Figure 1). But, as the authors point out (with British spelling): "Lysogeny has a unique role within the bac­terium-phage arms race in that it favours the development of symbiotic interactions because the fusion of phage and bacterial genomes, even if temporary, provides an ecological window for the evolution of mutually beneficial functions."

Lysogenic conversion, a situation where chromosomally integrated phages express genes that in­crease bacterial fitness, is one example of beneficial coexistence. Cantacuzene & Boncieu and Fro­bisher & Brown discovered it in 1926 and 1927, respectively, with experiments on Streptococcus that bear similarities with those that led to Griffith's transforming principal in 1928. Feiner et al. highlight several of the examples of virulence-affecting lysogenic conversions discovered since then. Yet, one imagines that examples not linked to pathogenesis must surely also exist, re­main­ing to be uncovered. 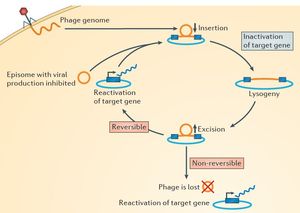 Figure 2. The active lysogeny regulatory switch as described by Feiner et al. Active lysogeny is a situation where a phage integrated into a bac­te­ri­al host chromosome serves (at least in part) as a genetic regulatory switch for the ex­press­ion of conditionally important bacterial genes at that integration site. In their Perspective the au­thors additionally differentiate between re­ver­sible and non-reversible forms of this re­gu­la­to­ry switch. Source

Insertion of a temperate phage into a host chromosome will be deleterious if the phage genome interrupts a func­tio­nally essential sequence. However, insertion that in­ter­rupts a host sequence that is only conditionally vital per­mits evolution of another beneficial coexistence where phage excision (and re-insertion in some cases) could be governed by the same cellular signals that activate re­la­ted conditional gene regulation. Several such active ly­so­ge­ny regulatory switches (Figure 2) have now been de­scribed, beyond the L. monocytogens–phage interaction that Marvin wrote about.

It's a Small World

Phage genome rearrangements that occur spon­ta­ne­ous­ly have long been observed. Controlled, conditional DNA rearrangements of active lysogeny, however, were first (to my knowledge) noted in 1990 through research done by one of my grad school professors, Barbara Kunkel, while she worked in the lab of my research grandfather, Rich Losick. This case involves the de­ve­lop­men­tal­ly controlled excision of the phage-derived skin element from the sigK gene during Ba­cillus subtilis sporulation. Since that time we know of a small number of other active lysogeny cas­es, such as involvement in conditional suppression of the DNA mismatch repair system of Strep­to­coc­cus pyogenes and in regulation of cyanobacterial heterocyst differentiation for nitrogen fixation.

However, sporulation seems to be a recurring theme among the few examples of this type of re­gu­la­to­ry switch. After the discovery in B. subtilis, similar rearrangements were found in spo­ru­la­tion genes of related spore-forming Bacillus species and the not-too distant relative, Clostridium difficile (recently renamed as Peptoclostridium difficile). Sequence identification of a phage in another B. subtilis gene, spsM, led to another demonstration of active lysogeny and established a novel component of this model organism's relatively uncharacterized spore coat. As with the other cases of active lysogeny in sporulation, the DNA rearrangement is limited to the terminal mother cell, ensuring the phage's continuation in the spore.

Notably though, this last case is the only described sporulation regulatory switch with a fully func­tio­nal lytic phage element. The fact that in most other cases of active lysogeny the regulatory swit­ches display scars of cryptic (non-func­tio­nal) phage elements begs the question of who does ac­tu­al­ly benefit from these kinds of phage-bacterial interactions?

In lysogenic conversion there is typically no apparent benefit to the phage beyond the simple com­fortable continuation of its host. Yet, the empty void of known benefits for the phage may attest to lack of specifically looking for this end of the interaction, surely when compared to research on bac­te­ri­al virulence. For the few func­tio­nal phages that serve as regulatory switches, one can en­vi­sion that this represents cooperation to maintain the status quo.

The frequency of genomic sequences arising from phage that have been effectively neutered by the host into a cryptic scar – tamed into a regulatory tool solely for the host’s benefit (see here for another example) – suggests that mutually beneficial cooperation may not be a common end game for phage-host partnerships. Although lysogeny is typically viewed as beneficial for phage fitness, it is clear that the situation also puts the virus at risk to evolving a little too comfortable an arrangement with its host. To be fair, it also should be reminded that the host is not without risk in this either.

It's a Phage World

The wealth of phage in the environment makes it altogether not surprising that temperate ones have evolved ways to integrate into conditional, functionally important host genes through a­dap­ta­tion to become regulatory switches. Such ad­ap­ta­tion may be related to their vital need to stay in communication with host cell stress signaling, as is seen with phage and bacterial SOS response (covered here and here).

The 'Perspective' by Feiner et al. concludes with a section that explores the potential for other phage regulatory switches in processes such as biofilm formation, LPS variation, and toxin ex­pres­sion. The discovery of additional cases, particularly outside of the well-trodden field of pa­tho­ge­n­e­sis is assured. These identifications along with a firmer grasp of their evolution and their re­gu­la­tion in synchrony with host cell activity will be exciting to see unfold.