« Active Lysogeny Regulatory Switches: Scars That Can Make Genes Whole | Main | How to Make a Photosynthetic Bacterium in One Simple Step »

At first, 4.6 million sounds like a lot, but in term of moles, it's nothing… 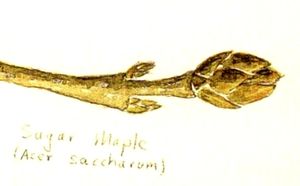 'The Trees in My Forest' by Bernd Heinrich. Detail from book cover. Source

"The fibers themselves are composed of long cellulose molecules coiled in a helix around a hollow axis. If ar­ranged end to end, about 2,000 cellulose chains, each one of them composed of about 1,000 glucose or sugar units strung together, would equal about one tracheid length. There are about 2 billion (2,000,000,000) cellulose chains in one tracheid or wood fiber. Each tracheid cell thus contains the equivalent of 2,000,000,000,000 sugar molecules, which are the primary product of pho­to­syn­the­sis. Most of a tracheid's growth occurs in about thirty days, thus one tracheid cell will add an average of 2 x 1,012 glucose units/(2,592,000 seconds/30 days) = 771,600 glucose units per second per tracheid cell for the entire thirty days. Glucose is a sugar composed of six carbons, requiring six carbon di­oxide molecules to make, hence one growing tracheid cell takes up the equivalent of 771,600 x 6 = 4.6 million carbon dioxide molecules per second."

Cited from Bernd Heinrich's book 'The Trees in My Forest', 1st Ed., 1979. I thank Brian Barry for pointing this out.