How to Make a Photosynthetic Bacterium in One Simple Step 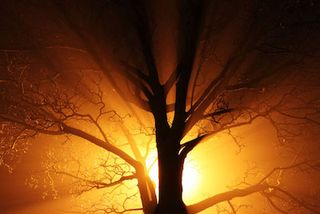 Can one turn an organism into photosynthesizer in one or two simple steps? That seems unlikely, as photosynthesis as we know it developed over a long time via a series of complex and sophisticated evolutionary events. Just making chlorophyll leave alone the rest of the machinery, took much doing. Could you imagine altering a "regular" bacterium into a photosynthesizer in a simple and straightforward way? The answer is startling: it can indeed be carried out in two relatively humble strides.

A recent report describes how this was done: The authors coated a fairly ordinary bacterium with beads of cadmium sulfide and, presto, it now uses light to enhance its ability to fix CO2. You have provided the bacterium with its own solar panels.  The chosen bacterium, Moorella thermoacetica, belongs to a class called the acetogens, who can fix CO2 to make acetate.  But it makes much more of it when provided with the energy of light. This trick may have industrial applications, some even green. The process uses up CO2, which, of course is highly desirable these days. In addition, acetate is industrially useful as a solvent and can also be converted into larger organic compounds such as vinyl acetate plastics. How did the authors do it:  they converted M. thermoacetica, a non-photosynthetic bacterium, into a photosynthesizer by precipitating on its surface particles of cadmium sulfide.  Cadmium is a semiconductor that is good at absorbing light.  This organism, a gram-positive anaerobic sporeformer, was carefully chosen (for us old timers, it used to be called Clostridium thermoaceticum) because it's known for efficiently turning CO2 into acetate via the Wood-Ljungdahl pathway (also known as the reductive Acetyl-CoA pathway). In the process, it produces acetate and biomass. This organism can grow as an autotroph, without being provided organic building blocks, just using H2 and CO2. In many habitats, M. thermoacetica is a major contributor to the turnover of carbon. It also occupies a singular niche in history, having been the organism chosen for the earliest biological experiments using C14 isotope as a tracer.

The steps in making the artificial photosynthesizer are simple: feed the bacteria Cd2+ and cysteine, which now come out of solution as CdS precipitates. The bacteria become beautifully decorated with CdS nanoparticles, about 10 nm or less in size, whose chemical nature was confirmed by spectroscopy and other means. Now, turn on blue light. When CdS absorbs a photon, it produces an electron and a "hole pair," e– and h+. The electron provides reducing power, which is passed on to the Wood-Ljungdahl pathway to synthesize acetic acid from CO2. The point here is that light greatly enhances the extent of this reaction.  Interestingly, these coated bacteria now become addicted to the light and require it for viability. Normally they don't like light, but the CdS particles shield them from damaging photons.

The overall reaction is

The yield of acetate is 90% based on the initial cysteine concentration, the rest becoming biomass. The quantum yield was 2.4% of incident light, comparable to that of plants.

The authors simulated sunlight cycle, 12 hours of light, 12 of dark. In the dark, acetate production increases for several cycles. Do biosynthetic intermediates accumulate during the light phase, to be used in the dark?

Microbes – yeast, molds, and bacteria – make wonderfully useful products, such as biofuels, solvents, and foodstuff, both liquid and solid. However, many of these processes result in the formation of CO2, which, these days, isn't good news.  In principle, this maligned gas can be used in combination with hydrogen to make desirable compounds such as sugars.  However, hydrogen is hard to make and hard to store. People have tried to do it using solid-state semiconductors that are good at absorbing light.  However, the next step, using the electrons to make organic compounds is quite challenging.  So, how about combining the two things, the capacity of semiconductors with the biochemical skill of Biology?” A marriage made in heaven, no? As one of the authors, of the paper Peidong Yang, said: "Our hybrid system combines the best of both worlds: the light-harvesting capabilities of semiconductors with the catalytic power of biology. In this study, we’ve demonstrated not only that biomaterials can be of sufficient quality to carry out useful photochemistry, but that in some ways they may be even more advantageous in biological applications." 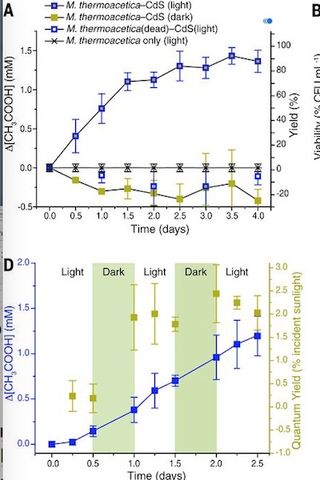 We recently discussed this paper on This Week in Microbiology episode #119. Michael made an outlandish-sounding suggestion: he proposed that instead of cadmium, one could use selenium. He pointed out that selenium is used in xerography to capture photons, so why not use it here? In fact, he proposed that if the bacteria could be taught to make a large amount of selenocysteine, a natural if unusual amino acid, the whole process could be done in a single step. Whether this is feasible is very much open to question, but the idea is fun. Actually, the authors of the paper mention that one could improve on cysteine oxidation, as discussed by others here and here.  So, the process is open to improvements, which may pave the way for its use at an industrial level. What now, buy stock in Moorella?