« Pictures Considered #35 : The Isolation of the Inner and Outer Membrane of E. coli | Main | Medicine Man » 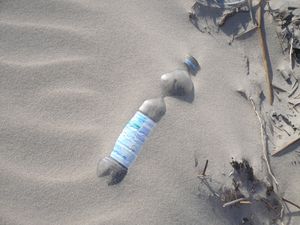 "For beverage packaging the barrier properties [= very low permeability] of the PET to certain gases, the ex­cel­lent mass to strength ratio and the recyclability of the fi­nal product are very important features influencing the choice of PET over other plastics or more traditional pack­ag­ing materials." (quoted from the essential­che­mi­cal­industry.org website). Given such attractive features, it's no wonder that about 50 million tons of polyethylene terephthalate (PET) were produced worldwide in 2013 alone (reliable numbers are hard to come by, it may ac­tually be less today than the mentioned 50 mio tons per year). Great, but there's a problem, in fact several problems:

An interdisciplinary team of microbiologists, biochemists, bioinformaticians, polymer chemists, and textile scientists from Keio University, Kyoto Unversity, and Kyoto Institute of Technology, Japan, started a search for microbial PET degraders in 250 samples taken from soil, waste water, and activated sludge at the yard of a recycling factory in Sakai, Japan, that had been processing PET bottles for roughly five years. 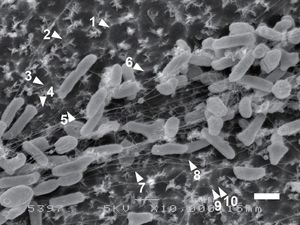 They cultivated their samples at 30°C with shaking in test tubes containing a defined medium supplemented with a film strip of low-crystallinity PET as the main carbon sour­ce. After about 3 weeks, they found that in one of the cul­tu­res the PET film showed "mor­phological changes", clear signs of de­gra­da­tion. The microbial consortium in this cul­ture ‒ bacteria, yeast-like cells and protists ‒ could be cultured continuously and they were able to iso­late the "culprit" for PET degradation by limited serial dilution. (For the experts: ) During the dilution experiments, they monitored the composition of the microbes by PCR for the SSU rRNAs and compared that to the presence / ab­sen­ce of PET-degrading activity in the individual samples. The SSU rRNA analysis revealed that the "culprit" is a Be­ta­pro­teobacterium from the larger Co­ma­mo­nas family, which they called Ideonella sakaiensis 201-F6, and which is ‒ they were lucky! ‒ not dependent on support of other members of the con­­sortium for growth. Growth tests came up with the result that Ideonella virtually mineralizes the PET film since after ~3 weeks roughly 75% of the PET was converted to CO2. Under the mi­cro­sco­pe, they found that the bacteria are not just hanging around in the liquid medium but actively attach as teams to the PET film through "appendages" (Figure 2). Although nothing is yet known about the molecular makeup and composition of these "appendages", they resemble at first sight those found to connect Geobacter or Shewanella cells and are used for conducting electricity. 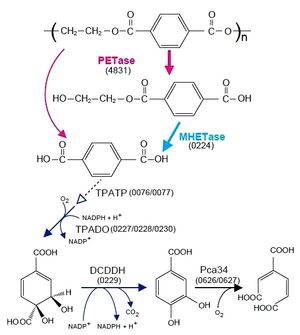 Yoshida et al. compared the growth of Ideonella on mal­tose and PET as carbon source and found by the RNAseq technique two genes that were highly expressed when cells were grown on PET. By combining their RNAseq da­ta with a genome analysis (draft genome level) they were able to identify the PETase, an esterase that breaks down the PET polymer, and the MHETase, a hydrolase that acts at the second step, both as secreted proteins, and sub­se­quent­ly, the enzymes for the complete me­ta­bo­lic path­way of PET degradation (Figure 3). This path­way re­­con­struc­tion confirmed the experimental result that Ideo­nel­la can break down PET completely, releasing CO2 and H2O as 'waste'. This is an important finding, because bac­te­ri­al degradation of toxic or problematic compounds is fre­quently incomplete and often yields intermediates that are not less toxic than the starting substances.

It is not without precedent that a Betaproteobacterium shows remarkable metabolic properties in dealing with complex and/or substituted hydrocarbons. For example, Ralstonia sp. TRW-1 can grow on vinyl chloride (VC) as sole carbon source, like its close relative Nitrosomonas europaea. More distant cousins from the Gamma­pro­teo­bac­teria branch can break down complex polycyclic aro­matic hydrocarbons (PAH): members of the marine Oceanospirillales family were found to be busy cleaning up the Puget Sound, WA, and slowly eliminating the huge oil spill in the Gulf of Mexico from 2010 (see here in STC, in pa­ragraph 'Detour #3'). In the family Ac­ti­no­bac­te­ria, a No­car­dia sp. was found to degrade PET, al­beit weakly, and Amycolatopsis mediterranei (Pseu­do­no­car­dia­les) en­codes a homolog of the I. sa­kai­en­sis PETase ‒ since PETase homologs are ex­tra­or­di­na­ry rare in se­quenced bacterial ge­no­mes this smells like some horizontal gene transfer (HGT) event at one point in the past.

It may not be too far fetched to assume that species capable of metabolizing one or more plastics and organochemical compounds ‒ many of which are considered hazardous waste, with good rea­son ‒ can be found in virtually all heterotrophic bacterial families. And it is encouraging to learn that the Japanese scientists have now found a bacterium that can potentially help to get rid of PET. But there is a caveat: a recent survey of microbial diversity in agricultural soils found 2.5 ‒ 5 x 104 dif­ferent bacterial species per gram, yet Yoshida et al. isolated just one single PET-degrading spe­cies, Ideonella sakaiensis, from 250 one-gram samples. The proverbial needle in a haystack.

But not only bacteria can break down plastics! Organized as a students' excursion into the metabolic diversity of the small things, members of Scott Strobel's lab from Yale University, New Haven, together with colleagues from the Universidad Nacional de Cuzco, Peru, sampled endophytic fungi in the Amazon rainforest. (A brief re­minder: Endophytic fungi thrive symbiotically within plant tissue, and often serve their host by defending against herbivores. Some even enable their host plants to cope with eleva­ted temperatures; we portrayed them earlier here in STC). Among their samples, Strobel and col­la­bo­rators found several isolates that de­com­po­se polyester polyurethane (PUR) (Figure 4). Further growth tests of two strains of Pestalotiopsis microspora (fungal class: Sordariomycetes) in the lab revealed that these fun­gi can grow on PUR as sole carbon source ‒ a re­mark­able feat given such a nasty substrate ‒ and that they do so either aerobically or anaerobically ‒ which is even more re­mark­able ‒ due to the strongly up-regulated expression of a dedicated serine hydrolase. To come full circle, some years ago two Fusarium species (also Sordariomycetes) were found to degrade fibrous PET in the lab but it's not clear how they would deal with PET in the wild. All these efforts can, on the long term, help to transform the buzzword "bioremediation" into viable technological alternatives to...   simply dumping plastics into the oceans.

Geologists incubate the idea these days that the human imprint on nature during the last hundred years would probably justify to consider the Holocene over and to declare the Anthropocene as the new, the next geological epoch. Much like the K-T boundary ‒ the thin, iridium-laden layer that separates the Cretaceous from the Tertiary ‒ the onset of the new epoch would be readily de­tec­table in the future by a distinct sediment worldwide: a layer containing a defined assortment of long-lived radioisotopes (the fallout from the nuclear tests in the mid-20th century) mixed with mi­cro­scopic plastic particles (a colorful heritage, to put it mildly, of human intervention into Earth's carbon cycle). Given the capability of the small things to munch on almost everything, the geo­lo­gists would do well to be aware of the likelihood of losing their 'plastic tracer' due to non-an­thro­po­ge­nic interventions, at least on the geological time scale.