« Talmudic Question #131 | Main | Pictures Considered #35 : The Isolation of the Inner and Outer Membrane of E. coli »

Opening Windows into the Cell 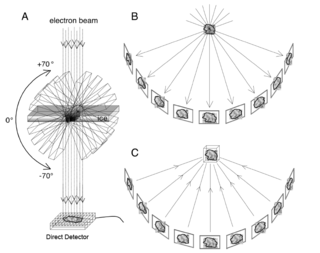 Principle of Cryo-Electron Tomography (Steven and Belnap, Current Protocols in Protein Science, 2005). A. Cryo-holder with the specimen is rotated to successive tilt positions. B. Projection of the specimen is recorded at each tilt position with direct detector/CCD cameras. C. The 3D-structure is reconstructed with the help of back-projection of images obtained in B.

In the 1940's, electron microscopy (EM) single handedly propelled cell biology into a new era. The discovery of cell organelles and their ultrastructure can be attributed to its application. The opportunity to cross the barrier set by the limitations in the resolution of optical microscopy was a crucial development for many researchers. It became possible not just to see the shapes and forms of cells, but to look inside them. Development of cytochemical techniques and immuno-EM during the same era allowed localization of molecules within cellular context at an unprecedented resolution. In the words of P. Ball, "...we know about molecules; we know about cells and organelles; but the stuff in between is messy and mysterious... yet that is the level of magnification at which much of the action takes place: the scale of perhaps a few to several hundred nanometres."

The field of EM has seen several major technical improvements over the past few decades, particularly in the design of the microscope, sample preparation techniques, cameras for imaging, and computational tools for image processing, all providing information at near atomic resolutions. Indeed, it wouldn't be wrong to say that this is an era of "Resolution Revolution." Cryo-EM enables biological specimens (including but not limited to intact tissues sections, bacteria, viruses and protein molecules) to be imaged in their close-to-living frozen-hydrated state. This allows us to take 'snapshots' of macromolecules unperturbed in their native environment, that is, the cell. Such an approach would form the basis of 'visual proteomics' by enabling mapping of molecular landscapes inside cells comprehensively. For all these good reasons, cryo-EM was named as the 'Method of the Year 2015' by the journal Nature Methods.

A relatively new field is Cryo-Electron Tomography (Cryo-ET) (Milne, et al. 2013) which has the potential to obtain 3D images of large objects like cells and organelles and even tissues with a resolution of 4-5 nm. These images provide precise information about the spatial organization of macromolecules in their cellular context. In this technique, the specimen is tilted inside the TEM and the sample is imaged simultaneously taking 2D images that can be combined to produce a 3D reconstruction. However, one of the factors that limit the resolution of this technique is the thickness of biological specimens. So, how to make the samples so thin that we can obtain beautiful high resolution images of cells where one can potentially identify macromolecules like ribosomes, membrane proteins and protein filaments? 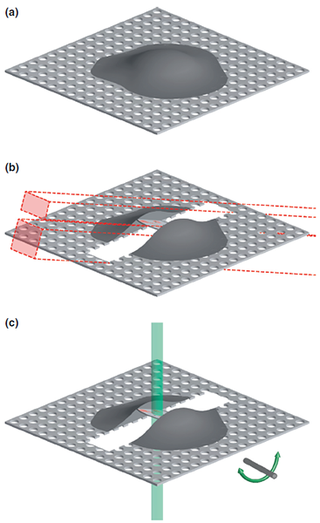 Schematic of FIB Milling. A. Mammalian cell plunge-frozen on an EM grid. B. Micro-machining of cells at cryo-temperatures using FIB. Patterns (red boxes) are selected depending on the milling geometry. C. Thinned sample or the lamella that is used for Cryo-ET by tilting the angle around the axis shown resulting in 3D reconstructions of cellular landscape (Villa, Schaffer, Plitzko, & Baumeister, 2013)

Some of the ways in which scientists have tried to circumvent this issue include using skinny bacterial cells or imaging only the thin edges of thick mammalian cells. One can also use a microtome to make thin sections of materials using steel/glass/diamond blades, depending on the sample. This, however, is known to introduce artifacts such as compressions in the sample being imaged. A recently developed approach is the use of Focus-Ion-Beam (FIB) milling machine, where frozen-hydrated specimen can be thinned by sputtering them with gallium ions. This instrument is now used on a routine basis by material scientists. We have been able to hijack it to use it at cryo-temperatures to ablate biological material (Villa, et al. 2013). The instrument is a combination of a FIB and SEM (Scanning Electron Microscope) system in the same chamber, the idea being to navigate and mill the samples using the FIB under the visual control of SEM. This reduces the radiation damage to the sample caused by FIB. This leaves 'windows' or what we call 'lamellas' that are thin enough to be electron transparent in a TEM (Transmission Electron Microscope).

Advanced technology like Cryo-electron tomography combined with genetic and molecular biological tools has provided deep insights into several biological phenomena. For instance, it was believed for a long time that bacteria do not have a cytoskeleton. Yet, filamentous structures were later visualized in rapidly frozen bacteria and their composition identified via genetic studies (Li, et al. 2007). This technology makes is possible to determine the structures of unknown molecules in tomograms. For instance, the location and orientation of ribosomes were successfully determined and structural differences between ribosomes in different functional states were also explored (Ortiz, et al. 2006). Cryo-ET of flagella has led to publications of detailed in situ structures of flagellar components like microtubules, dynein, and others.

In addition, it is also possible to localize the features of interest using Cryo-correlative fluorescence microscopy (Cryo-FM) by imaging fluorescently labeled molecules on the EM grid seen under the optical microscope (Plitzko, Rigort and Leis 2009). Hence, taking advantage of complementary imaging modalities, we can first identify the features of interest using fluorescence microscopy and capture high-resolution details of cellular events using Cryo-ET. In short, one can decipher the spatial and temporal organization of proteomic networks. Another widespread technique is the use of clonable metal labels such as metallothionein and ferritin that allow direct localization of proteins within the cell with the EM. 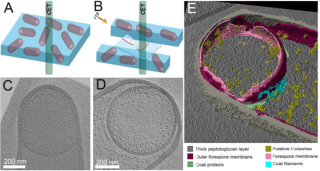 Looking at all the advances made in the past few decades and the ones that are yet to come, the future of Cryo-ET holds several promises to unravel several unsolved mysteries in biology. We have also gotten to the point where it is possible to image thick Drosophila brain using a combination of cryo-X-ray microscopy and Cryo-EM, albeit at low resolutions (Leforestier, et al. 2014). The day is not far, my friends, when we may be able to image human organs and look inside them! The field of science has advanced to an extent where scientists have developed origami microscopes which cost just 50 cents and are called 'Foldscopes' (Cybulski, Clements and Prakash 2014) and future efforts may be to develop something similar here, which would make this technology readily available to a larger scientific community, as cost is one of the major factor limiting its use. This is a challenging task though!

The next frontier is cell dynamics. Right now, we can look at many copies of molecules in different conformations and infer their dynamic behavior, but can we stop peering at frozen molecules? We would like to see real-time atomic structures going about their day!  There are already in situ EM holders where allow to see molecules in liquid phase interacting in real time, using a device known as the environmental scanning electron microscope. The challenge is that in order to follow molecules over time we have to continuously expose them to the electron beam, which is the equivalent to many small atomic bombs. This might be reasonable for some hard materials, but for biological molecules the radiation damage is a show-stopper (unless we would be interested in studying the behavior of macromolecules subject to extreme radiation). With cameras getting faster and more sensitive, one can imagine the use of stroboscopic electron microscopy, in which we could capture time-lapse movies of the molecules as they move inside cells.  Keep your eyes open – the future is luminous! Kanika Khanna is a Graduate student in the Division of Biological Sciences, University of California, San Diego.