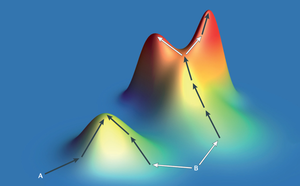 Figure 1. The properties of evolutionary pro­ces­ses can be illustrated by the con­cept of the 'fit­ness landscape'. In this de­monstration of se­ve­ral experimentally observed behaviors, height represents drug re­sis­tance. Different starting ge­no­types (A and B) may have a different pro­pensity to evolve resistance owing to their pro­xi­mities to drug-resistance peaks of varying height. The first geno­typic step towards re­sis­tance can some­times define the final genotype and the level of resistance (arrows from B). The pathways to resistance can at times be con­strained and predictable (dark ar­rows), but evo­lu­tionary pathways can diverge (light arrows) to distinct peaks separated by negative genetic inter­actions. Source

Imagine you're outside, taking your customary Sunday walk to enjoy ‒ it's still March! ‒ a chilly breeze and the (barely) unfolding springtime. You stroll along and, upon reaching a fork, you proceed on whatever path just looks inviting enough. It's Sunday, after all! Eventually you ar­rive at the top of a hill and you have a nice panorama view, with all the other smaller or higher hills in sight. By then that's it: you can't go further uphill. Very much alike, bacteria are thought to explore the 'fitness landscape', where the height of the 'hills' is not measured in meters but in degrees of relative fitness to thrive under the given conditions. In Figure 1, you see an example for a (theo­re­ti­cal) landscape where bacteria are challenged with an­ti­bio­tics and can achieve fitness by climbing uphill, in­crea­sing their resistance through random mutations ‒ or fail and die. The concept of a 'fitness landscape' was first pro­posed by the geneticist Sewall Wright in the 1930s to mathematically model the path(s) of evolution for a po­pu­la­tion under selection. And, just as any good scientific concept, it has ever since met with criticism. The pro­bab­ly most profound criticism being that the original model fails to reflect the inevitable impact of the 'movement' of a population on the landscape itself. But without discussing the concept in all necessary detail here, it is, obviously, highly intuitive: adaptation lets bacteria reach a fitness peak under the given conditions but there's a limit. But is intuition, maybe, misleading?

Recall the 'Red Queen Hypothesis', first proposed by evolutionary biologist Van Valen in 1973, which describes an evolutionary system of species interaction where continuing adaptation is needed for one species to maintain its relative fitness in relation to another, co-evolving species, such as in predator-prey interactions. Or, as L. Carroll's Red Queen said to Alice: "Now, here, you see, it takes all the running you can do, to keep in the same place." (Through The Looking-Glass). We have mentioned the Red Queen frequently in this blog, most recently by Daniel here. "It takes all the running" means that limits for adaptability are not allowed in the Red Queen hypothesis. But, admittedly, the fitness landscape itself is not really constant here, nor are peak heights. But does the Red Queen really hit a limit? 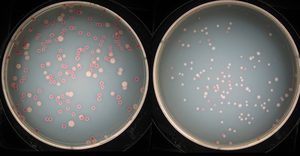 Figure 2. The plate on the left contains about equal numbers of colonies of two different bac­teria. After the bacteria com­pete and evolve, the lighter ones have taken the lead in the plate on the right. Source

It's always nice when solutions to a theoretical dilemma come from experiments! When Richard Lenski started his long-time experiment of E. coli evolving in a flask in 1988, everything went on as boringly as expected for a very long while. The experiment itself was intended to ex­pe­ri­men­tally "rewind the tape" of evolution as Stephen Jay Gould had famously demanded to study the paths evo­lu­tion takes. So Lenski and his collaborators started with 12 identical cultures to monitor their development over time. And at defined intervals they froze samples to be able to start-over from an earlier point in case some in­ter­esting evolutionary event would happen. For years, all 12 cultures adapted ‒ seen, for example, by shorter generation times ‒ to the never-changing growth conditions, almost in synchrony. In 2008, after 31,500 generations, cells in one of the cul­tures "spontaneously" decided that it's about time to also snack on the citrate that had been, next to limiting glucose, part of the growth medium from the very beginning, and which E. coli bacteria usually can't metabolize (it was part of the medium for chelating Mg2+ and Ca2+ ions). By "re­wind­ing the tape" the Lenski lab could show that some mutation(s) had accumulated at generation ~20.000 and "predisposed" this culture to develop the citrate+ phenotype later, a nice example for contingency. 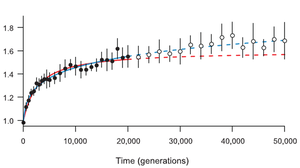 Here, to solve the theoretical dilemma outlined in the first two paragraphs, another finding by Lenski's lab is important. To exactly monitor the E. coli cultures slowly climbing uphill in their never-changing 'fitness landscape' they developed a competition assay rather than relying on subtle differences in generation times: they assayed to which extent a younger, better adapted culture over­grows an older one; this being done by co-culturing both for a defined period and subsequently counting them on plate assays for their different Ara+/Ara‒ phenotypes, which were without influence during the competition (Figure 2). The surprise came when they tried to find the best mathematical fit to extrapolate the fitness-gain values obtained for the first 20.000 generations up to generation 50.000 and beyond. They considered two models: a hyperbolic model, which means a model with an asymptotic limit of gainable fitness being approached but never reached by steadily decreasing smaller steps ‒ the mathematics underlying various 'fitness landscape' models ‒, and a power-law model, which means a continuous fit­ness-gain by steadily decreasing smaller steps yet without any upper limit (Figure 3). While the curves obtained for both models were virtually in­dis­tin­guishable for the first 20.000 generations, the hyperbolic model clearly underestimated the fit­ness-gain found for generations 30.000 ‒ 50.000. By contrast, the power-law model came pretty close to the measured values. Just recently, the Lenski lab found that the power-law driven fitness gain also holds for generations 50,000 ‒ 60,000, with much the same variability in gain among the different cultures as before. They calculated one possible outcome for a time point in the far fu­tu­re: if the experiment were to continue for another 2.5 billion generations (no problem, that makes up for just a little over 1 million years of experimentation), the predicted fitness relative to the an­cestor would be ~4.7 based on the power-law parameters estimated from all 12 populations from the first 50,000 generations. By then, the generation time would have dropped to ~23 min (in case the bacteria could learn to skip the lag phase), while the generation time of the ancestor was ~55 min in their glucose-limited minimal medium (with a lag phase of ~90 min). This would be indeed speedy growth in minimal medium but bacteria with even shorter generation time are known (some Vibrios and Clostridia have generation times of below 15 min, in rich media). Thus, and this is the important point, the power-law fit to their experiment does not predict implausible growth rates even far into the future, and adaptation can probably continue for a really long time for asexual organisms even in a constant environment. While running uphill, the Red Queen won't hit any limit anytime soon.