A Sphere of Free Food 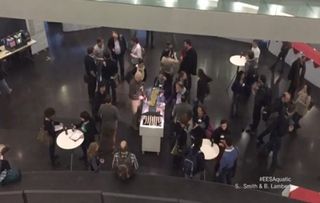 At the February 2016 Ocean Sciences Meeting (OSM) in New Orleans, hundreds of presenters shared their experiences investigating the exciting lives of microbes in the world’s oceans. Coming from near and far, nearly 5,000 scientists and policy-makers swarmed the conference center; some zipping from room to room to catch several talks of interest, while others were content to stay in place absorbing whatever information was thrown at them. During the highly-anticipated coffee breaks and poster sessions, all of these scientists converged on common areas with an important mission: food and drink (Figure 1). In addition to being attracted to sustenance, there were of course other benefits to this centralization, including the opportunity to communicate with other scientists and establish collaborations. In the bacterial world, a similar type of behavior occurs frequently and is known as chemotaxis; the movement of microbes in response to a chemical stimulus. Several presentations at the OSM focused on this topic in the context of how microbes are able to find and compete for food in the ocean. Perhaps less appealing than the delicious fried foods that conference attendees were provided, the bacterial food under discussion was often in the form of dead and dying phytoplankton cells.

For phytoplankton, there are unfortunately countless ways to die in the ocean. These include grazing by predators and microbial attack (e.g. bacteria or viruses), leading to lysis and the release of organic matter into the ocean. Bacteria are found throughout the ocean, but are especially abundant near dense phytoplankton populations for exactly this reason. This abundant organic matter is available on a first come-first serve basis (as with us: it’s a sad moment to arrive at the coffee break and realize all the muffins are gone). So it makes intuitive sense that bacteria would develop ways to quickly recognize that this organic matter is available, and to get to it faster than other bacteria in the area. However, it’s not easy to confirm and understand this in detail because interactions occur on short and irregular time scales, making real time observations challenging. This is where one study presented at OSM and recently published in the journal Proceedings of the National Academy of Sciences (by Steven Smriga et al.) comes into play: scientists from Roman Stocker’s lab in Zurich used induced phytoplankton lysis combined with high-resolution video microscopy to understand how bacteria "beat the crowd" to get to the phytoplankton food.

The first step of the project was to simply look (albeit with a fancy microscope and microfluidics chamber, Figure 2). The group began by observing enriched natural samples of bacteria, finding that some motile species would swim to and cluster around "hotspots" of organic matter, including different species of phytoplankton, dead copepods, and fecal pellets (…yum!). These dense aggregates of bacteria formed over various timescales and then dissipate quickly as bacteria moved on to their next meal. Using a Nikon TE-2000 microscope with a CMOS camera they created videos of these events, which set the stage for controlled laboratory experiments (see below and click here for more videos). Taking an even deeper look, they used 16S rRNA high-throughput sequencing to determine the most abundant bacterial members of the communities they observed.

So, who won the bacterial race for free food? The community was dominated by Pseudoalteromonas and Vibrio species, both members of the gammaproteobacteria class. This is in line with prior observations that members of these genera can strongly chemotax towards dissolved organic matter. These types of bacteria are called copiotrophs, as they prefer nutrient rich environments such as phytoplankton blooms. In contrast, oligotrophs are commonly found in nutrient poor regions and are often non-motile and more limited in their ability to use different nutrients (usually having small, minimized genomes to prove it).

Next, the group re-enacted the events they observed by creating artificial hotspots in a laboratory system. They selected the commonly found diatom Chaetoceros affinis, and made its cells lyse by exposing them to strong fluorescent light under the microscope. During and after the lysis event or events, they used time-lapse images acquired every 0.05 s at ∼1-μm resolution to determine how many of the bacteria were in the area surrounding the phytoplankton, a region known as the "phycosphere" at a given time (Figure 3). 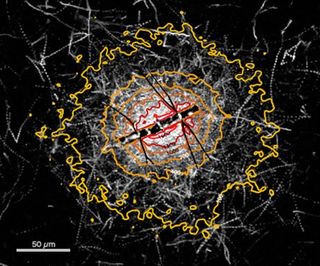 Previously, the phycosphere has been considered a theoretical concept rather than a reality with quantifiable boundaries. By observing the bacteria that can access and utilize the dissolved organic matter (DOM, i.e. bacterial food), this region could then be put into perspective. For Chaetoceros, this region extended about 2mm from the cell, though it likely varies depending on the size and DOM content of the individual phytoplankton cell being lysed. Using the information they gathered, the group modelled how much organic matter would be consumed by all bacteria, and how this matter would be partitioned between motile and non-motile bacteria in different environmental scenarios. In other words, how important is it for bacteria to be able to detect and move towards organic matter? Is it worth the energy? They found that under typical (more nutrient-rich) coastal conditions, motility was less important for DOM consumption. This fits well with prior studies that indicate a low prevalence of motile bacteria in coastal waters. However elsewhere, in regions with DOM "hotspots" such as phytoplankton blooms, chemotaxis and motility can play a major role in the fate of DOM, even when there are not many motile bacteria present. When the food is concentrated in certain spots, it pays to invest the energy needed for motility get to it fast; when it’s spread out homogenously it may not be worth the expenditure.

There are also risks associated with migrating to the source of DOM, such as exposure to antagonistic molecules that may be secreted either by diatoms or by other bacteria, or perhaps running into some pesky phages. How quickly such agents diffuse through the seawater will determine exposure, so ultimately motile bacteria are tasked with getting the "good stuff" while avoiding the "bad stuff" (while non-motile bacteria are essentially just sitting targets for both). The ability to model phycosphere interactions based on observed bacteria-diatom interactions opens the door to a deeper understanding of the complex interactions occurring in these regions and throughout ocean microbial ecosystems.

Who’s in the Inner Circle?

There is a seemingly endless number of marine bacterial species that could potentially take advantage of the nutritious phytoplankton matter, whether by competition or establishing a cooperative relationship. But interestingly, the same key types of bacteria seem to be found associated with phycospheres across the world. It has been known for some time that different diatoms have distinct and specific bacterial communities, but there is little known about what factors (biotic or abiotic) define these ecological relationships.

Another fascinating talk at the Ocean Sciences Meeting given by Olivia Ahern et al. examined what types of bacteria were found in the phycosphere of the diatom Thalassiosira rotula using samples collected across the globe. The goal of the study, which is still in progress, is to use 16S sequencing to define the microbial communities associated with 53 different diatom isolates, and then to examine whether variables including environmental factors, host diatom strain, space, or season account for any observed patterns in the phycosphere community. Their preliminary results suggest that distinct bacterial assemblages are associated with different sampling locations. They identified more than 250 different bacterial species (or more specifically, operational taxonomical units, since only the DNA was measured), many of them members of the classes Alpha and Gammaproteobacteria. These are the same species that were found with diatoms in the studies discussed above, which further shows that these types of bacteria are indeed "phycophiles." 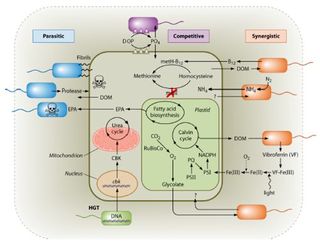 While many of the bacteria commonly associated with the phycosphere specialize in using the DOM released from dead phytoplankton using chemotaxis and motility to "beat the crowd," others have devised more specialized ways to coerce their nutrition from living diatom cells. These interactions are an emerging area of research in the field of marine microbiology, and a discussion of them could easily take up an entire blog article (For some examples, see Figure 4). One example is the relationship between the diatom Pseudo-nitzschia and Pelagibacter, the bacteria discussed in Amin et al. 2005. In this study, bacteria were shown to secrete the plant hormone indole-3-acetic acid which stimulates phytoplankton growth, causing the phytoplankton to provide the bacteria with a valuable source of carbon (Amin et al. 2015). Other studies have shown that, in exchange for carbon substrates, bacteria provide diatoms with B vitamins that they are unable to make themselves. (Croft et al. 2005). These recent studies are just the tip of the iceberg.

A complicated sphere of interactions

For both bacteria and conference attendees, the region around sustenance is wrought with complications. What’s the best way to get what you want? Is there enough of it to go around? Then there are other interactions to consider. At a conference, your price for getting food may be an awkward run in with a competitor or former colleague, or you may get the added benefit of establishing new beneficial relationships and collaborations. Bacteria in the phycosphere may have to contend with antagonistic interactions, or may acquire some new useful genes. It’s a toss-up, but really it’s all worth it if the end result is a delicious snack. 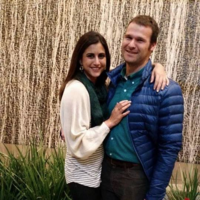 Rachel is a Ph.D. student in the Allen lab at the Scripps Institution of Oceanography and the J. Craig Venter Institute in La Jolla, CA. She studies marine microbes and how they interact with each other, humans, and the environment. In her free time she enjoys surfing, cooking, and reading.