« A Sphere of Free Food | Main | Evolution? Who Needs It Now That We Have CRISPR/Cas9s? » 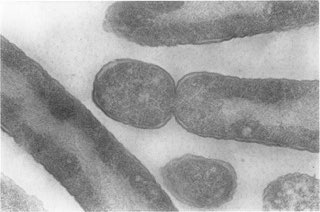 Bacterial minicells were first reported in detail in 1967 by a group at the Oak Ridge National Labs led by Howard Adler. The paper had a provocative title: "Miniature Escherichia coli cells deficient in DNA." The authors realized that a mutation was involved and pointed to the fact that the division process appeared to be "normal", if misplaced along the cell. Also, they showed that minicells could be separated from their mothers by sucrose density gradient centrifugation. Analogous findings were soon reported for Bacillus subtilis and other bacteria.

As aptly described in a recent "Classic Spotlight" of the Journal of Bacteriology by William Margolin, minicells have helped elucidate several important aspects of bacterial cell division and growth, including leading to the discovery of the Min system in Larry Rothfield's lab and its elaboration by Piet De Boers's lab. Minicells have also been found useful for the production of heterologous proteins and for transferring plasmid DNA to eukaryotic cells, among other things. All in all, an unexpected and fascinating finding!