"The earth is suffocating – Swear to make them cut me open, so that I won't be buried alive."
– Frederic Chopin, while dying of tuberculosis 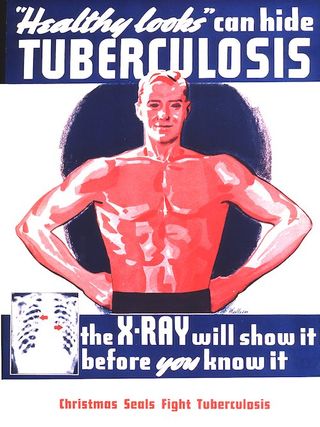 Figure 1. Anti-Tuberculosis advertising from the American Lung Association c. 1935. Just because a person looks healthy, he/she may be infected with TB without knowing it. Source

Tuberculosis (TB), is an infectious disease caused by the bacterium Mycobacterium tuberculosis (Mtb). Symptoms of an active TB infection include chronic cough with blood-tinged sputum, fever, and weight loss. In fact, prior to the 1882 discovery of the microbe by Robert Koch, TB was called "consumption" because the rapid rate with which infected patients lost body mass made them appear to be "consumed" by some unknown entity. What makes TB particularly chilling is that an overtly healthy individual may harbor the microbe and develop active disease unexpectedly, then pass Mtb to others through aerosol droplets. Most infected persons do not have symptoms, but about 10% of latent infections eventually progress to active disease. What it takes is a weakened immune system for the bacteria to overcome it and multiply, resulting in the progression from latent infection to TB disease.

"The reasons why multidrug resistance continues to emerge and spread are mismanagement of TB treatment and person-to-person transmission. Most people with TB are cured by a strictly followed, six-month drug regimen that is provided to patients with support and supervision. Inappropriate or incorrect use of antimicrobial drugs, or use of ineffective formulations of drugs (e.g. use of single drugs, poor quality medicines or bad storage conditions), and premature treatment interruption can cause drug resistance, which can then be transmitted, especially in crowded settings such as prisons and hospitals."

Acquiring high-quality drugs and completing a full 6-month course imposes major economic burdens on infected patients, especially those in developing countries. If left untreated, about half of all cases of active TB infection eventually result in death.

Extensive research is being conducted to determine the specific virulence factors that allow Mtb to literally root itself within its host. Mtb has a slew of virulence factors (although, best we know, no protein endotoxins), and more are being discovered regularly. A previous article in this blog discusses one of Mtb's essential virulence factors, and its effect on the host immune system. But Mtb not only has separate virulence factors, but veritable defense systems, one of them being a virtually impermeable cell envelope. 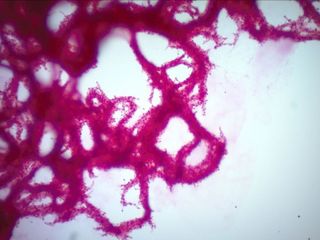 Mtb's coat is unusual in being rich in very long and exotic lipids that constitute an external membrane called the mycomembrane. It renders the bacterium impenetrable to components of the host's immune system and many harsh chemicals including strong acids as well as common antibiotics. Thus it plays a crucial role in its pathogenicity. It is also involved in conferring resistance of Mtb to drying, which aids in its transmission between persons. Since many of the patients develop disease in the lung, they end up coughing up live bacteria that can persist for a long time in human habitations.

A recent report studies further a strain of virulent Mtb that lost virulence through passages on various media in the 1930's. The mutant strain is defective in the synthesis of mycolic acids, long chain fatty acids characteristic of the mycomembrane. Strikingly, this strain shows an obvious phenotypic difference from its virulent brother (or may be, its cousin thrice removed): it doesn't form the characteristic cords (Figure 2) usually observed in virulent strains. The avirulent strain is still somewhat infectious but cannot replicate within macrophages.

A genomic survey uncovered that the avirulent strain differs from its parent in three virulence-related polymorphisms (SNPs). One is particularly interesting because it has a nucleotide insertion in the hadC gene. This gene belongs to the essential hadA-hadB-hadC cluster encoding proteins- you guessed it- HadA, HadB, and HadC. These are subunits of two heterodimeric dehydratases, HadAB, and HadBC and part of Mtb's fatty acid synthase type II (FAS-II) system. This system is responsible for elongating fatty acids and is involved in the biosynthesis of the mycolic acids, which are long-chain α-alkyl β-hydroxy fatty acids containing between 74-89 carbons. (To read about the other two SNPs please click here for an article about a mutation in the transcriptional regulator PhoP, and here for an article about a mutation disrupting phthiocerol dimycocerosate (PDIM) and glycosylphenol-PDIM biosynthesis pathway.)

These peculiar waxy compounds are major components of the mycomembrane and are responsible for stabilizing its architecture and decreasing its permeability. Thus, mycolic acids contribute significantly to the virulence and persistence of the strain within a host. They are responsible, among other things, for the survival fo the bacteria within macrophages. Accordingly, the authors set out to determine if there might be a link between mutations in hadC and attenuation of Mtb virulence. 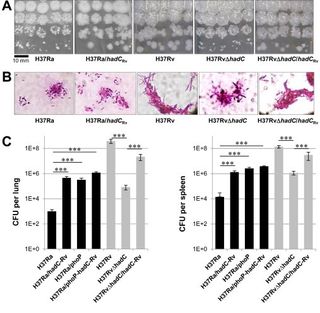 As any bacterial geneticist would, the authors first removed the hadC gene from a virulent strain of Mtb in order to pinpoint phenotypic changes in the mutant. Deletion of hadC not only decreased the strain's virulence, but also reduced acid fastness and rendered it more sensitive to diverse compounds, particularly the large and lipophilic antibiotic rifampin. It is likely then, that the mutation disrupts the organization of the mycomembrane.

It has been known that the structure of the mycomembrane is involved in Mtb aggregating into biofilms or into planktonic structures known as cords. The authors analyzed mutant and wild type hadC Mtb strains for colony morphology and cording ability, as well as determining their virulence by measuring spleen size in infected severely immunodeficient (SCID) mice. Removal of hadC activity rendered a virulent strain incapable of both biofilm production as well as cording ability. Furthermore, re-introducing a functional copy of hadC into either the avirulent strain or a hadC deletion strain regained both capabilities (Figures 3 and 4). 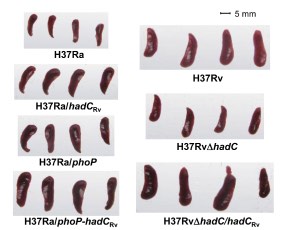 At the end of the day, hadC is obviously an important gene for Mtb infection, being responsible for loss of virulence and cording morphology. This is most likely due to important changes in the structure of mycolic acids in the mycomembrane, which normally creates a virtual fortress against all attacks by the host, be they by the immune system or by antibiotics. The identification of a genetic mutation that renders Mtb vulnerable to external compounds is extremely important because it provides us with a new attractive target for drug therapy that may make an impenetrable bacterium permeable to a slew of drugs that previously were useless. This initial work kindles the hope that we are not doomed to a world of totally antibiotic resistant tuberculosis. 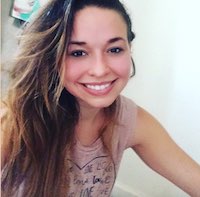 Monika Buczek is a Ph.D. candidate in the Molecular, Cellular and Developmental Biology Department at the City University of New York Graduate Center. She is a member of Dr. Anu­rad­ha Janakiraman's lab at the CCNY Center for Discovery and Innovation and her thesis research focuses on the proteolytic regulation of E.coli cytokinesis. She also teaches as an adjunct lecturer in Molecular biology and Microbiology at the City College of New York.