« The Enemy of My Enemy is My Friend - A Microbial Solution to The Emperor of all Maladies | Main | Who Feasts on Volcanic Fluids? » 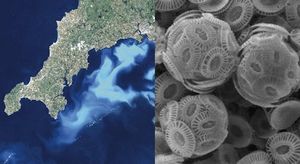 Figure 1. EHUX bloom from space (the coast off the southwestern tip of England) and under the scanning EM. Source

In the ocean, bacteria and eukaryotic microbes (mainly the phytoplankton) interact in various ways, some mutually beneficial, others detrimental. Many, perhaps most of these interactions, take place via chemical communications. If you had a hydro phone-like gadget that could detect chemicals instead of sound, the racket would be deafening. Yet, we know little about these goings-on. A recent paper listens in on the conversation between Emiliana huxleyi or Ehux, a coccolithophore microalga that is one of the most abundant members of the phytoplankton, and a bacterium of the genus Pseudoalteromonas, which is also plentiful. These bacteria are known to make components that kill diatoms and dinoflagellates, and are all found together in the water column. In addition, Pseudoalteromonas haloplanktis is strongly attracted to an osmoprotectant, dimethylsulfoniopropionate, which is made in large amounts by EHUX. It bears mentioning that Ehux is one of the most abundant eukaryotic microbes on earth, capable of making blooms in the ocean that can readily be seen from outer space.

According to a recent paper, Pseudoalteromonas piscicida makes a quorum-sensing molecule, 2-heptyl-4-quinolone (HHQ), one of a family of such compounds that have been well characterized as the Pseudomonas quinolone signals. In fact, what makes this compound particularly interesting is that it doubles up as an antibiotic and kills Ehux in culture in the nanomolar range. Some chlorophytes and diatoms that are also members of the phytoplankton are not so affected. Killing of Ehux by HHQ is slow, suggesting that something other than lysis may be involved. The authors found some other as yet unidentified molecules caused immediate lysis, so a collection of compounds appears to be involved. Interestingly, HHQ has been previously found to be active against yeast as well as other bacteria. In other words, this is a polyglot term that can be understood by the users of different languages, both prokaryotic and eukaryotic. Interkingdom communication via bacterial quorum sensing molecules has been known before, e.g., for communicating with human stem cells. It makes you wonder how many such multilingual signals are out there.