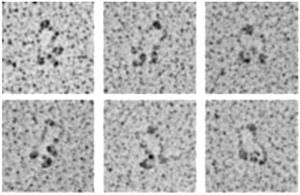 Rod-shaped Escherichia coli cells have, depending on growth conditions, a length of 1 – 2 µm and a diameter of ~0.5 µm but harbor a chromosome that is ~1.5 mm long, a thousandfold difference in length. So, there is a prob­lem to fit this chromosome into the cell, right? Not so, in fact, because although the DNA molecule of a chro­­mo­so­me may be longer than the cell by 3 orders of mag­ni­tude, it is also incredibly slim, with a diameter of ~2 nm (maybe a tad more when you take the hydration shell of DNA in­to account, including a pinch of salt ions). A back-of-the- en­velope calculation comes up with a volume of ~0.005 µm3 for this DNA mole­cule assuming its maximal com­pac­tion – which would render it biologically useless, of course, as the DNA would be physically broken down to the size of oligonucleotides. But anyway, it's no big deal to pack the entire chromosome into a cell with a volume of 0.6–0.7 µm3. The real problem comes with another aspect of the length of this DNA molecule, familiar to everyone who listens to music with in-ear headphones: almost unavoid­ably, the cords of one's earbuds get inextricably en­­tang­led, always, and for storage a cord wrapper is really useful. But unlike cords, chromosomes are highly dynamic structures. They must be per­ma­nently accessible to the machineries of tran­­scrip­tion, recombination & repair, and, once in a while, of replication. Lastly, newly replicated daughter chromosomes have to be neatly distributed to daugh­ter cells, cord‑embroilment being off-limits. So, "something" that would temporarily clamp DNA molecules together for sorting and for com­pac­tion would come in handy to avoid end­ing up with a tangled mess.

In 1992, Sota Hiraga and colleagues published their finding of a conditional E. coli mutant that gave rise to a high percentage of normal‑sized but anucleate cells under non-permissive growth conditions. The mutant had obviously severe problems with proper partitioning of replicated chro­mo­somes to daughter cells and was, therefore, termed MukB ('mukaku' meaning 'anucleate' in Ja­panese). The mukB gene turned out to encode a protein of 1486 amino acids with a molecular mass of 177 kD, making it one the largest E. coli proteins (and for biochemists a pain to handle in the lab, by the way). The protein sequence predicted amino- and carboxy-terminal globular ATP­ase domains se­pa­rated by long stretches of coiled-coil, which was confirmed on electron micro­graphs of the pro­tein. MukB forms dimers in solution, whose geometry is rather intricate: in the monomer, the amino- and carboxy-terminal 'head' domains interact with each other, with the long coiled-coil regions arranged anti-parallel, thus exposing a 'hinge' region located approximately in the middle. Two monomers dimerize via interaction of their hinge regions, which gives the dimer molecules a characteristic "V"-shape. When the MukE and MukF proteins are added the dimers form a closed, tetrameric ring, a necklace, whose diameter of ~50 nm would allow to encircle more than one double-strand of DNA, a hint at the function of MukBEF. 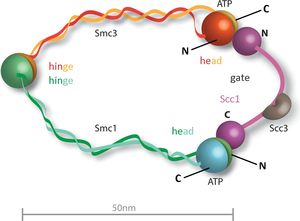 Figure 2. Structure of the cohesin complex. The SMC proteins contain nucleotide-binding motifs situated at opposing ends of the polypeptide, which fold creating a hairpin structure with a 50 nm coiled-coil domain situated between the ATP-binding head domain and hinge domain. Smc1 (green/blue) and Smc3 (red/orange) to­gether form a V-shaped heterodimer via hinge– hinge interaction. The C-terminal domain (C) of Scc1 (purple) associates with the head domain of Smc1, whereas the N-terminal domain (N) associates with the head domain of Smc3, thus forming a closed ring structure. Scc3, the fourth subunit of cohesin binds directly to Scc1. Mo­di­fied from Source

The detection of a MukB homolog in yeast followed suit. Yeast SMC1 was the first of a large number of ho­mo­lo­gous SMC proteins (SMC for 'Stable Maintenance of Chro­mosome') that were found in virtually all Eukaryotes, from protists to fungi, plants, and vertebrates. SMC ho­mo­logs are also found in archaea and most bacteria, in the latter organized as a SMC‑ScpAB set. Among the bacteria, SMC-ScpAB ho­mo­logs are prevalent with the exception of one branch of the Gammproteobacteria whose members have, like E. coli, the MukBEF set (see above). A number of bacteria have, in addition to SMC‑ScpAB, a third variant, MksBEF, which can, for ex­ample in P. aeruginosa, partially compensate the chro­mosome segregation defect of a SMC‑ScpAB mutant (for details see here in STC). So there is certainly some over­lap in function among these three bacterial necklace-variants but it is not clear for which specific tasks some bacteria employ two rather than one set. What is be­com­ing increasingly clear, however, is that, as expected, the bacterial SMC proteins participate in chromosome se­gre­gation. Just two examples: in B. subtilis, the SMC-ScpAB set connects with the ParABS 'spindle‑type' filaments that move newly replicated replication origins to the de­sig­na­ted positions in the growing mother cell; in E. coli, the MukBEF set connects with Topo IV, the spe­ci­fic gyrase responsible for decatenation of daughter chromosomes prior to their final separation during cell division (recently reviewed by Stefan Gruber). 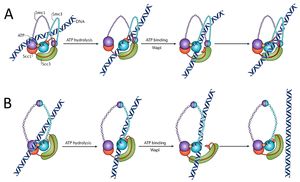 (Click to enlarge) Figure 3. Model for DNA entry into and exit out of the cohesin (Smc1, Smc3, Scc1, Scc3) ring. A DNA entry into the cohesin ring might involve folding of the cohesin ring, such as to facilitate DNA contact with the two Lys residues (denoted 'K') exposed on the Smc3 head. DNA contact triggers ATP hydrolysis, which allows DNA to pass through a gap be­tween the ATPase heads. The ATPase heads re-engage by binding to ATP, before helper protein Wapl stimulates disengagement of the Scc1 N-erminus from Smc3 to complete DNA entry into the cohesin ring. B Ring folding is not required for DNA exit, as the DNA-sensory Lys residues are readily accessible from inside the ring. A similar sequence of events as in part A leads DNA on the same trajectory through the interlocking ATPase head and Scc1–Smc3 gates out of the ring. Source

But how to mount a necklace onto DNA threads, and how to release them again when required? To understand the topological hurdles of these crucial steps, a general scheme for the eukaryotic cohesin complex might help, as shown in Figure 2; the eukaryotic cohesin complex shown in Figure 1 is structurally closely related to the bacterial MukBEF com­plex. Particularly detailed in vitro studies of the Schizosaccharomyces pombe cohesin complex yielded a model that suggests that DNA entry and exit occurs via opening of a gate, by releasing the 'clasp': the Scc1/Scc3 proteins that tether the Smc1 and Smc3 heads of the necklace (Fig. 2). For entry into the ring, DNA has first to contact two lysine residues of the N‑terminal head domain, which requires distortion of the necklace structure since they are located unfavorably "inside" the ring. But once this is achieved, the DNA thread passes between the two head domains of Smc3 that are driven apart by ATP hydrolysis and subsequently slips inside the ring (Fig. 3 A). For the second step, which uses re-binding of ATP to restore the interlocking of the head domains after passage of the DNA thread, the necklace employs a hel­per protein, appropriately named Wapl (Wings-apart-like protein homologue). For the re­lease of the DNA from the necklace, the order of the loa­ding events is reversed. And here now, the DNA thread can contact the critical lysine residues from the inside, exit through the gate is easy, no helper pro­tein(s) re­qui­red (Fig. 3 B).

As in the Bacteria, close molecular links exist in Eukaryotes between the necklaces and other fac­tors involved in chromosome segregation. To give one example: one of the clasp proteins, Scc1, is known for its crucial role in sister chromatid cohesion, and must be cleaved by separase to allow mitosis to enter the anaphase stage. Yet eukaryotic necklaces face a problem that doesn't exist for their bacterial counterparts: nucleosomes, which, with DNA wrapped around them, are too bulky to simply slip through the rings. Since eukaryotic promoters are usually free of nucleosomes, co­hesins and condensins have better chances here to grasp DNA, and the influence of both on tran­scriptional regulation is a very active research field presently.

In late 18th century France, The Queen's Necklace affair – a novel by the prolific A. Dumas, author of The Count of Monte Cristo and The Three Musketeers – was not the cause of the re­­vo­­lu­­tion but added to the soaring popular anger. Likewise, the cells' DNA necklaces didn't bring about a re­vo­lu­tion in cell biology, yet their study opened the experimental avenue to a better un­der­stan­ding of chromosome organization and dynamics on the molecular level, in the small things and the larger ones. Today, way too much is known about all the fashionable styles of necklaces – con­densins, cohesins, DCCs (dosage compensation complex) – and their specific time-points and modes of action, and their interaction partners, to allow for a fair, comprehensive overview in a blog post. But if you are a fan of jewelry you may take a glimpse at their varieties here, or even peek into a very recent review in Nature (Open access).