Who Feasts on Volcanic Fluids? 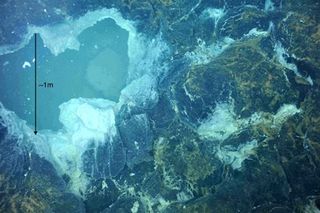 Your aquarium water turns green when you overfeed your fish. When limiting nutrients like nitrates and phosphates are introduced into a body of water, microscopic algae multiply so much that the water changes color. For example, in response to fertilizer runoff, a 2011 cyanobacteria bloom changed the clear waters of Lake Erie into a dark-green soup and forced the nearby city of Toledo into a state of water crisis.

We frequently see what eutrophication looks like and understand how microbes respond to excess nutrients in lakes and coastal areas. A similar microbial bloom is observed when excess nutrients from hydrothermal vents are released on the seafloor. During a submarine volcanic eruption, the microbes living inside the oceanic crust spew out into the water column, along with CO2 and H2S in high concentration. One of the consequences of such changes is a transient phenomenon called "snowblower vents," hydrothermal apertures that release white flocculent materials resembling snow (For an awesome video, click here). These flocs consist of huge clumps of microbes living chemoautotrophically off CO2 and H2S gases. Who is crazy enough to live inside an active hydrothermal vent and thrive on toxic gases? An article published by researchers at Woods Hole Marine Biological Laboratory addressed this very question by performing detailed molecular analyses on samples from an Axial Seamount eruption.

Axial Seamount is the name given to the youngest active submarine volcano in the Northeastern Pacific Ocean. Because of its activity and unique geology, it is being monitored via the world’s first underwater volcano observatory called NeMO (for New Millennium Observatory) and is a key site of the National Science Foundation’s Ocean Observatory Initiative (OOI). This is a hotspot for oceanographers, geologists, chemists, ecologist, the Navy, and also marine microbiologists.

The Axial Seamount erupted in 1998 and again in April 2011. When submarine volcanoes erupt, the geology, chemistry, and ecology of the surrounding region changes a lot; eruption causes bottom water to be loaded with minerals and particulates up to tens of meters above the seafloor. Such eruptions also redistribute hydrothermal vents, destroying some and creating new ones.

Vents are grouped according to their physics and chemistry. Thus, black smokers are high-temperature vents that emit black clouds of iron and sulfur, while white smokers emit white clouds of barium, calcium, and silicon. Unlike black and white smokers, snowblowers are low temperature, diffuse vents that do not emit clouds of minerals but instead discharge white flocs of bacterial mats. Not surprisingly, they are of great interest to microbiologists. Following the 2011 eruption, researchers observed the ephemeral snowblower vents and, for once, also found novel orange flocculent materials coating the seafloor near the vents (figure 1). 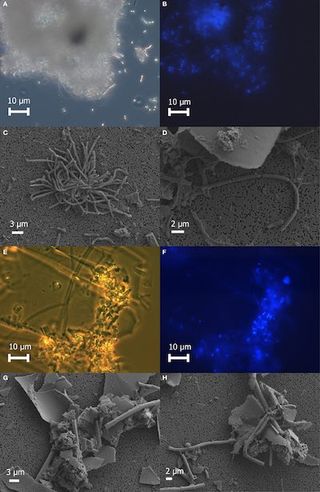 Researchers examined both types of flocs under the phase-contrast microscope and the scanning electron microscope (SEM). The white flocs contained huge clumps of cells, some eukaryotic-looking debris, and numerous bright spheres and rods (figure 2A). The bright objects did not stain with DAPI – which stains DNA fluorescent (Figure 2B), and were not detected in SEM (figure 2C,D), presumably because they are made of or coated with sulfur crystals.

Just like the white flocs, the orange flocs were biological in origin, showing many clumps of cells and eukaryotic debris (Figure 2E-H). However, they the lacked the sulfur crystal containing-bright objects. Instead they contained larger particulates of iron oxide. The large sheath-like structures were found in the orange flocs only. In addition, the orange flocs had fewer cells than the white ones.

For the very first time, researchers determined what creatures created this white and orange flocculent material in submarine vents. More than 3,000,000 DNA marker sequences were used to identify bacteria and archaea from two white floc samples, two snowblower vent fluid samples and one orange floc sample. Surprisingly, bacteria outnumbered archaea by 99:1 in all of these five samples.

The bacterial composition differed with each sample type. Sequence analysis showed that Epsilonproteobacteria dominated white flocs and vent fluids ,while Gammaproteobacteria were prevalent in the orange floc (Figure 3). Descending to the genus level, Sulfurovum and Sulfurimonas genera were most abundant Epsilonproteobacteria in white flocs and vent fluid samples. SoxB gene, a gene involved in oxidation of sulfur compounds like hydrogen sulfide and sulfite, was detected in Sulfurovum and Sulfurimonas. Uncultured deep-sea sediment BD7-8 Marine groups of Gammaproteobacteria were significantly enriched in the orange flocs. 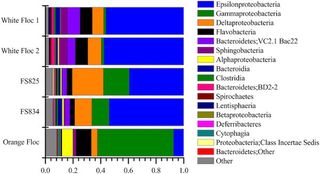 Making Sense of the Data

The white and orange flocs are very different in terms of chemistry and biology. The orange flocs have large sheet-like structures and heavier particulates especially iron oxide. They are dominated by Gammaproteobacteria, specifically a significant portion of the BD7-8 Marine group, which is commonly found in iron-rich mats in other parts of the ocean. This organism may be getting its energy by oxidizing iron compounds. Because orange flocs are found on the seafloor and not directly within the stream of H2S gas, there may not be enough sulfur for the sulfur-oxidizing Epsilonproteobacteria to use as energy. These data overall suggest that the orange flocs arose from the erupting vents and later became colonized by some Gammaproteobacteria, including iron-oxidizing bacteria in the surrounding seawater.

The white flocs, on the other hand, are rich in sulfur and contain large clumps of cells. Here, the dominant species are Epsilonproteobacteria, specifically Sulfurovum and Sulfurimonas. These organisms are chemolithoautotrophs, meaning they get their energy by oxidizing the abundant H2S gas into elemental sulfur in part via SoxB gene, which explains why the white flocs contain bright spheres and rods made of or coated with elemental sulfur. White flocs also contain strictly anaerobic archaea. Before eruption, these organisms must have lived underneath the seafloor crust, deep inside the volcano and away from oxygen. When the vent erupted, they are flushed out onto the seafloor, causing microbial blooms on the seafloor surface due to excess nutrients. This suggests that the organisms found in the white flocs came from deep within the vent where there is no oxygen and from the surface bloom.

To answer the initial question of who is crazy enough to live inside active hydrothermal vents and thrive on toxic gas, it turns out extremely diverse bacteria and archaea are! Being adapted to the hot temperature and high pressure, an active hydrothermal vent is just a warm comfy home. Vent eruption is a gift from nature, a rare feast they can't ignore. Bon Appétit!

Than S. Kyaw is a fourth-year undergraduate student at the University of California San Diego, double-majoring in microbiology and pharmacological chemistry. His research interests are microbial community structures, microbiomes, and “omics” technologies. When he is not hiking, playing with animals, or fantasizing about Hogwarts Wizarding School, he can be found doing awesome experiments in Dr. Douglas Bartlett’s deep-sea microbiology laboratory at the Scripps Institution of Oceanography.