Coughs, Coiled Coils, and the Classroom Cliché of
Conformational Change

"Sally has the whooping cough…" 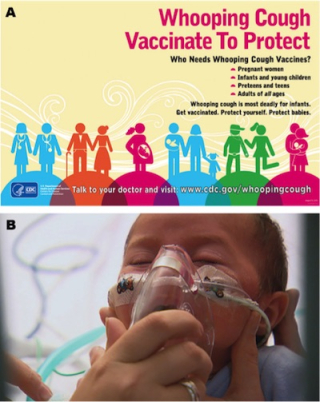 Figure 1 (A) Pertussis: Whooping Cough Vaccinate to Protect Poster from the Centers for Disease Control and Prevention. (Source) (B) An infant with pertussis is given an oxygen mask. Photo credit: ©WGBH Educational Foundation. Source

So starts a verse in a modern version of the children’s folk song Pop Goes the Weasel. The 'whooping' sound generated through struggles for breath following fits of intense coughing characterizes pertussis. Caused by the beta-proteobacteria Bordetella pertussis, this highly contagious disease can seriously afflict humans of any age, particularly babies. Endemic in the United States, pertussis peaks in cycles of three to five years, with the last peak outbreak in 2012 with over 48,000 reported cases. (In fact, at the time, this was the discussed in TWiM #38) Worldwide estimates calculate that there have been approximately 16 million reported pertussis cases and between 200,000 – 300,000 pertussis-related fatalities per year. Since 2000, with the advent of a new, less potent acellular pertussis vaccine and a disturbing rise in vaccine refusal, overall endemic pertussis rates have been on the rise, with major outbreaks becoming more frequent (such as a 2010 outbreak not long preceding the 2012 peak).

With humans (and other apes) as the only known reservoir for B. pertussis, the most effective preventative measure against its disease remains vaccination as part of the diphtheria, tetanus, and pertussis (DTP) immunization, and the prevention of its spread through the human population via airborne droplets (Figure 1A). However, once an individual becomes infected with the bacteria and after disease symptoms set in, rapid treatment with antibiotics is essential, along with breathing aids (Figure 1B). As with all pathogens, major goals of research are a greater understanding of the biological basis of their virulence and the elucidation of mechanisms that could suggest targets for novel antimicrobial compounds. So what molecules does B. pertussis employ to cause its devastation, and how?

A number of virulence factors are responsible for B. pertussis pathogenesis (reviewed here). Within the upper respiratory tract, the bacteria attach to epithelial cell cilia and secrete a toxin that paralyze the cilia, causing inflammation and preventing clearing of mucus and debris from the lungs. Meanwhile, a second bacterial secreted toxin interferes with G protein coupled signaling, thereby blocking numerous components of the innate immunity. As is common for bacteria, the change in environment for Bordetella from outside the host to upper respiratory tract entry is accompanied by a reset of genetic expression from one appropriate for the avirulent state to one tailored for the virulent state. This story has been unraveled in some detail using the tools of microbial genetics and structural protein biology.

Master regulator of B. pertussis pathogenesis 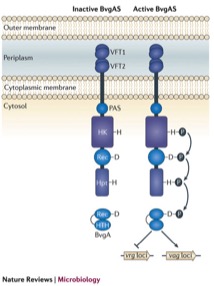 A two-component phosphorelay system (TCS) named BvgAS is responsible for controlling this switch from avirulent to virulent gene expression. BvgAS thus governs expression of both toxins mentioned above, as well as that of the many other factors involved in B. pertussis virulence. In this system, BvgS is the multidomain, histidine-kinase receptor that can phosphorylate (activate) BvgA, the response regulator that serves as a transcriptional regulator of virulence genes (Figure 2). Conversely, BvgS can also act in reverse, as a phosphatase, and deactivate BvgA. While ligands and conditions in the lab are known to deactivate signaling, what activates signaling within the in vivo pathogenic condition remains unclear. A recent mBio report by Lesne et al. characterizes the mechanical regulation of BvgS activity in terms of dynamic changes to its overall structure through triggered shifts in its constituent domains, particularly via the stability of coiled-coil helices.

I found this report interesting on two levels. First, it showcases the importance of biochemistry – structural mechanism – to understanding biology, at the level of pathogenesis and disease. It is a running joke in biochemistry classes that the answer to so many questions can be simplified down to a cliché of "conformational change" and "stability of structures". Proteins receive signal, and ‘pop’ goes the protein, changing shape to physically carry out consequences. And then again ‘pop goes the protein’ resetting it back to its initial shape. However, for particular systems, it is immensely important to tease out the molecular details of this general conformational change. This is particularly true for those systems like a TCS whose operation is central to the virulence of a deadly pathogen. Which brings us to the second point of interest for this study: this particular research is not only relevant to B. pertussis, but also to other important human pathogens that contain BvgAS homologs involved in virulence, including Vibrio, Yersinia, and Borrelia species.

The authors of the report focused their study on BvgS, the sensor histidine kinase, to address the role of a 2-helix coiled coil domain within the linker region between two intracellular domains of BvgS, the PAS and HK domains (Figure 2). Before focusing on that however, a brief overview of the multiple domains of BvgS to put things in context. 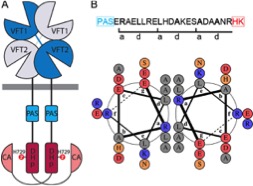 Figure 3 The PAS – HK linker of BvgS. (A) Cartoon of the BvgS dimer. (The Rec and HPt domains are not shown). The HK domain is composed of a DHp region where the phosphorylatable histidine residue lies and a CA region that can bind ATP for catalysis. (B) Amino acid sequence of the PAS – HK coiled-coil linker showing the a and d residues of the three heptad repeats. Below that is a helical wheel diagram of the coiled-coil. Hydrophobic residues are in grey, polar uncharged residues in orange, negative residues in red, and positive residues in blue. (Source)

First, BvgS contains a pair of periplasmic domains whose family is named ‘Venus flytrap’ (VFT), a name that derives from the activity of clamping onto ligand. They are unusual in canonical TCS, being more common in transport systems. Conformational change in the VFT upon ligand binding translates to structural changes in the cytoplasmic portion of BvgS, starting in a PAS domain, which is typically found in signaling proteins. Conformational change propagates then to the histidine kinase (HK) domain of BvgS, which itself can be subdivided into two distinct regions: a DHp region that contains the actual phosphorylatable histidine residue, and the ATP-binding catalytic region (CA) itself (Figure 3A). The phosphorelay process then continues through the BvgS receiver (Rec) and histidine phosphoryl transfer (Hpt) domains to ultimately activate BvgA.

Again, the authors focused their research on a coiled-coil predicted to form within the linker region of BvgS between its PAS and HK domains. The role and importance of this predicted coiled-coil in BvgAS signaling was unknown. However, both their previous research on BvgS and studies of similar structural features within unrelated TCSs (such as here) suggested to the authors importance for this coiled-coil.

BvgS: A balance between rigidity and flexibility

How does one go about testing the importance of a coiled-coil domain for a protein’s function? Two-helix coiled-coils are defined by stretches of seven amino acid repeats that form two helical turns. The first and fourth residues of this heptad repeat are generally hydrophobic, allowing interface between the two helices, while the other residues are typically polar, promoting the helix formation itself (Figure 3B). The authors’ experiments primarily involved altering the length of this coiled-coil linker region or changing individual amino acids between leucine or alanine to shift the linker between states of flexibility (mostly Ala) and rigidity (mostly Leu, to effectively now be a stable leucine zipper). To assay the activity of these altered BvgS mutants, the authors used lacZ transcriptional fusion reporters of b-galactosidase activity within B. pertussis. Signal from these reporters would be triggered by BvgA if it, in turn, was activated through phosphotransfer from a given BvgS mutant. The authors additionally used Cys-scanning analysis on a truncated BvgS expressed in E. coli cells to address interdimer S-S bond formation within the linker region, confirming coiled-coil formation. This also allowed them to correlate phenotypes seen for kinase activity of the coiled-coil mutants in the lacZ reporter assays with changes in coiled-coil structure seen through dimerization dynamics via Cys-scanning.

The authors found that the length of the coiled-coil linker between the PAS and HK domains was extremely important, with the addition of even one heptad completely abrogating the BvgS-mediated signaling, as did insertion of one or four residues to shift the register of the coiled-coil. Most importantly, shifting the coiled-coil stability between rigid and flexible through replacement of residues with leucine or alanine revealed at least some of the conformational change underlying the switch between BvgS activity as a kinase (virulent state) or phosphatase (avirulent state). A leucine-rich linker resembling a rigid leucine zipper adopts a low-energy conformation induced through a buried hydrophobic interface between helices, and this conformation for the coiled-coil prevents virulence gene activation (presumably through acting as a phosphatase on BvgA). In contrast, a highly flexible conformation for the coiled-coil imposed by alanine-rich sequence favored keeping BvgS in its kinase state, even in the presence of ligands identified in the lab that normally turn it off. The proper length and composition of this coiled-coil within BvgS between its PAS and HK domains is therefore essential for structure dynamics that allow the sensor kinase to act properly as a master regulatory switch.

Though the authors research clearly points to the importance for the dynamic structure of this coiled-coil linker in BvgS activity, other experiments they performed indicated that these dynamics are completely independent of the presence of the PAS domain. Previous research indicates that the PAS domain is important for BvgS activity in B. pertussis, and may even have a role in signal sensing. But how its conformation and response to ligand binding translates into coiled-coil dynamics and subsequent activity associated through phosphotransfer is unknown. Additionally, not all BvgS family members contain the PAS domain, meaning it may have a more specialized role depending on the species.

While this report in mBio does a good job of addressing the biochemistry of this coiled-coil domain within BvgS, it lacks analysis of mutants during in vivo infection. While B. pertussis does not normally infect animals outside of primates, artificial research models do exist, such as through mouse or pig infection.

The presence of BvgS homologs with similar coiled-coil regions in other pathogens suggests that dynamics of such a linker region may be important for master regulation of virulence activation in several diseases. Additionally, this appears more broadly relevant even beyond pathogens, as a similar mechanism is seen in an unrelated TCS of Bacillus subtilis, DesK, which is a more canonical sensor histidine kinase involved in response to cold temperatures. Interestingly, dynamics in the coiled-coil of this particular sensor may not just involve conformational changes in the protein itself, but also in its lipid environment through temperature flux. But that’s a chronicle of conformational change for another time. In the meanwhile, we can relish in the elegance of modern structural and genetic studies done in combination.