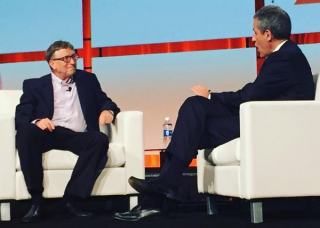 This year’s annual ASM meeting was different in that it combined the usual General Meeting with the antibiotic-oriented ICAAC meeting. The combined meeting was of course larger but, each of the two has always been gigantic, so bigger may not have been felt all that much. Anyhow, the cavernous spaces of the Boston Convention Center more than accommodated the hordes.

The meeting started with a brief lecture by Bill Gates, followed by a lengthier interview (you can watch the entire interview here). I have never heard him speak in person and was amazed by his depth of understanding of the issues surrounding world health, both in general terms and in technical details. He knows what CRISPR is! I was touched by his tone, which was matter of fact and straightforward. He gives the impression of having made a total commitment to his cause, without projecting his persona and without ostentation. I was truly impressed.

Various matters of microbiopolitical business kept me from listening to much science. It’s been this way for me for quite a few years. But I heard a few papers I thought were outstanding. One was by Silvia Bulgheresi from Vienna, about the odd bacteria that one finds in unusual places, such as the skin of nematodes. Nanne Nanninga discussed some of them here (A Bacterium Learns Long Division), but more have been found. Also on the subject of cell division and morphogenesis, Mariana Pinho from Lisbon explained that Staph aureus divides in ways both unconventional and unexpected. These cells are not spherical throughout their division cycle but elongate at times and divide asymmetrically. So, even "ordinary" bacteria do unordinary things. 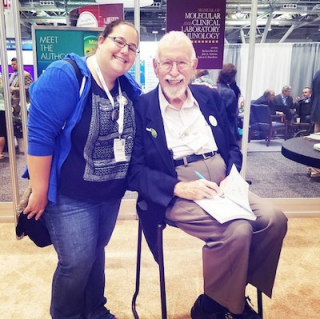 Elio at ASM Microbe 2016 signing copies of his new book. "In the Company of Microbes" is, based on this (STC) blog. Thanks for being part of what makes this blog so special and the reason we were able to write this book! Source

Two new books carrying my name have just appeared and I was involved in signing them at the meeting. One is the second edition the undergraduate textbook Microbe, authored by Michele Swanson, Gemma Reguera, Fred Neidhardt, and myself. The other is a collection of pieces from this blog entitled In the Company of Microbes (watch a special video from the signing). We are very happy with them and recommend them heartily. Check them out. The price is right! We also recorded an live episode of the podcast I co-host, This Week in Microbiology (watch here).

Over lunch, three of the STC co-bloggers (Daniel Haeusser, Jamie Henzy, and Christoph Weigel) and I discussed plans for this blog. Don't expect momentous changes, although we did consider a number of issues. Getting together in vivo is, of course, most nourishing.

At meetings like this one, I look for people with white or little hair, as they are most likely to include my friends and acquaintances. I met quite a few of them and enjoyed their company greatly. I’m very glad I went.