Seeing from the Bacterial Point of View 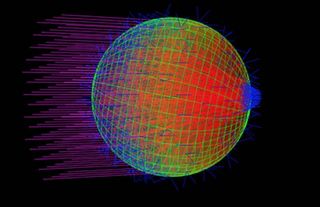 Though we live on the same planet, the world of bacteria is far removed from our own, largely because of the sheer difference in size. Life on the micrometer scale is governed by rules that do not constrain us, and vice versa: aquatic environments are dominated by viscous forces, and external stimuli such as chemical gradients occur on a scale too large to sense over the length of a single bacterial cell. And yet, some strategies used in both worlds carry at least a superficial resemblance. Surprisingly, one of these is the ability, literally, to see.

Our difficulty to "see from the microbial perspective" engenders low expectations for the sophistication of micro-denizens. However, we are now learning that we have severely underestimated the complexity of microbial behavior. Each new finding serves as a humbling reminder that we eukaryotes are not so special. Research by Nils Shuergers et al. goes so far as to suggest that the sense of vision, often touted as a paragon of complexity, may have been present in some bacteria long before multicellular life on Earth. In an unusual (and unrelated) example, some dinoflagellates, ergo eukaryotic microbes, have a remarkable eye-like structure called the ocelloid.

Figure 2. (click to enlarge) Movement of individual Synechocystis cells under different light regimes. Displacement over a 5 min time-frame was measured 1 min after the onset of illumination. The mean resultant length from a Rayleigh test (r) and the number of tracked cells (n) are shown. See also Video. (a) Schematic diagram to illustrate the optical set-up for a light gradient projected onto the agar surface (as in b) and oblique directional illumination (as in c–e). (b) Cells moving in a white light gradient from 0–20 µmol photons m–2 s–1 over a 165 µm interval from the top to the bottom of the plot, showing no significant directional bias. (c) Illumination from an oblique RGB LED light source from the right, at intensity 10 µmol photons m–2 s–1. (d) Illumination from a similar light source placed orthogonally to that in (b). (e) Simultaneous illumination from both oblique light sources. (f) Correlation of cell movement with light direction, as a function of time after applying the light. The shading indicates the time window plotted in b–e. The y-axis shows the mean resultant length from a Rayleigh test (r) where 0 indicates random displacements and 1 indicates maximal clustering in the direction of illumination. LED, light emitting diode.
Source

Some species of cyanobacteria, a phylum of photosynthetic bacteria that gave rise to the eukaryotic chloroplast in ancient times, can move towards or away from light of different wavelengths, a property known as phototaxis. One such species is Synechocystis PCC 6803, which uses Type IV pili (T4P) and twitching motility to move. But until now the mechanism by which it senses the light and knows where to go was mysterious.

Is phototaxis governed by a mechanism similar to chemotaxis, where direction of illumination is sensed via a change in concentration over distance? If so, one would be able to "trick" Synechocystis into moving in a certain direction: illuminating an agar disc of bacteria from below to create a graduated light pattern across the disc should result in cells moving laterally towards the brighter end where photons are more plentiful, even though the true light source was below them.

Turns out, you can’t fool cyanobacteria that easily. In the situation described, in which the brightest light does not indicate the location of the source, cells don’t move decisively, but instead twitch randomly around. There’s no doubt they can sense the direction of light very well, though, because illumination from one side of the agar disc results in a unidirectional movement towards the light source. When two side-illuminating light sources are placed at a 90° angles to one another, the cells move not towards one or the other, but in a diagonal between the two.

Cyanobacteria clearly perceive a light source directly, instead of embarking on a biased random walk a la runs and tumbles in chemotaxis. It’s as if they can actually "see" the light — and, incredibly, that may not be far off the mark. There’s an important distinction between sensing a chemical gradient and sensing light direction, in that light acts not only as a particle but as a wave, travelling from its source through the cell that senses it. In passing through, the light path is altered by the refractive properties of the cell it traverses. Specifically, in the case of a spherical cell, light entering from one side will be gathered to a small point at the opposite end, not unlike how the eye focuses incoming light onto the retina. It turns out that cyanobacteria "see" the direction of light by a single cell having lens-like optics—a beautifully simple solution compared to blindly counting photons. 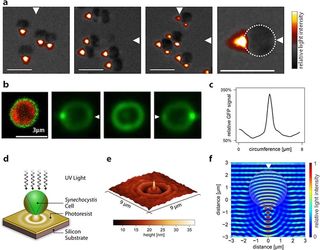 Figure 3. (click to enlarge) Micro-optic effects in cyanobacteria. (a) Synechocystis cells viewed with oblique illumination from the different directions shown, with enlarged image on the right. Scale-bars: 5 µm. (b) Images of periplasmic GFP fluorescence in Synechocystis torA-gfp (Spence et al., 2003). Left: two-channel confocal micrograph (GFP fluorescence in green; chlorophyll fluorescence in red) with GFP epifluorescence images of a single cell illuminated from the right, above and left (arrows indicate illumination direction. (c) GFP fluorescence profile around the cell circumference, extracted from the epifluorescence image in (b) with illumination from the right. The profile was taken in an anti-clockwise direction starting at the point nearest the light source. (d) Schematic illustration of the measurement by photolithography of near-field optical effects of a Synechocystis cell. (e) Height profile reconstructed from an AFM image of a photolithograph from the experiment illustrated in (d). (f) Finite difference time domain model of the light path (wavelength 365 nm) through a Synechocystis cell (illumination direction indicated by the arrow). The color scale indicates relative light intensity obtained by time-averaging the amplitude of the Poynting vector for the electromagnetic field. The wave patterns represent a snapshot of the oscillating electromagnetic field propagating through the model cell. GFP, green fluorescent protein. Source

Does the cyanobacterial cell truly act as a lens? Bright-field microscopy showed a spot of light focused at the edge of the Synechocystis cell opposite from the light source, and reflected on the agar surface. To more accurately quantify this lensing effect, the researchers expressed GFP (with a TorA leader sequence , which localized GFP to the periplasm. Illuminating these cells directionally with light of the right wavelength resulted in strong GFP excitation at a focal point at the opposite cell periphery. The fluorescence intensity was almost five times stronger than that at the side facing the light source. For a high-resolution analysis of the lensing effect, the authors captured the light pattern adjacent to the cell on a photosensitive crosslinking polymer substrate. The surface relief was profiled using atomic force microscopy, revealing that the lensing effect is strong and sharp despite the bacterium’s small size, with a focus diameter smaller than the wavelength of the incident light.

For a cyanobacterial cell this light spot would be an effective indicator of light source direction and thus trigger motility. Counterintuitively perhaps, the movement towards the light in Synechocystis is actually a photophobic response, in which the cell moves away from the brighter light spot on the cell periphery, hence towards the source. Whereas presenting a light gradient failed to trick Synechocystis, illuminating a highly focused laser spot on a cell that’s moving toward a general light source makes it head off in the direction opposite of the laser spot, heedless of its previous direction of movement. This happens only when the laser spot is brighter than the lens-formed focus opposite the general light source.

The researchers also considered the possibility that cells perceive light directionality through the decreasing light intensity along the cell body because heavily pigmented thylakoid membranes absorb light as it passes through the cell. It turns out that the path length in question—that is, the size of the cell—is too small for light to diminish significantly along that distance, despite the high pigment concentration. The light-focusing effect is much more intense.

How does Synechocystis translate this optical information into movement? The research group previously showed that directional motility is controlled through dynamic localization of the T4P machinery, including the ATPase PilB1, on the edge of the cell in the direction of movement. The membrane-bound photoreceptor PixJ1 is a strong candidate for the primary receiver of the light signal. Consequent signal transduction may trigger disassembly of the T4P motor apparatuses proximal to the light spot, resulting in movement in the other direction. 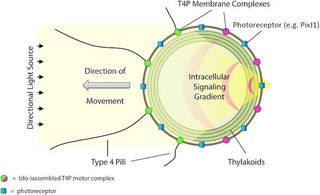 Figure 4. (click to enlarge) Model for control of positive phototaxis in Synechocystis. Directional illumination of the cell produces a sharply focused and intense spot of light) at the cell periphery on the opposite side from the light source. The focused spot is perceived by photoreceptors in the cytoplasmic membrane triggering signal transduction via CheY-like response regulators that locally inactivates the T4P motility apparatus. Consequently, patches of the motor proteins can only form on the side of the cell facing the light source. Pili are extended and retracted at this side of the cell, which therefore moves towards the light. T4P, Type IV pili.
Source

Twitching, and other subtle modes of bacterial motility, are less showy than the overt dynamics of flagellar movement. Perhaps certain modes of motility are better suited to specific stimuli. Because flagellar motility does not allow for very direct swimming in a chosen direction, it may be less suited to seeking the light. There are no known examples of flagellated phototactic bacteria, although the flagellated unicellular eukaryote Chlamydomonas does utilize an eyespot for photoreception. The environmental factors that trigger twitching motility are not yet well understood, but we do know that motility based on T4P is an essential part of many complex bacterial behaviors, such as biofilm formation and pathogenicity that are ripe for investigation. Further research on this topic is bound to help us "see" from a bacterium’s point of view.

Parts of the experimental design are well illustrated in this video which combines various videos that are part of the paper: 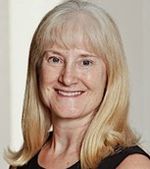 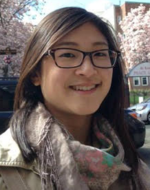 Mizu is a graduate student in Prof. Jim Golden's lab in the Division of Biological Sciences of the University of California at San Diego. Susan Golden is a professor at that institution.

Prof. Golden holds a Howard Hughes professorship at the University of California at San Diego