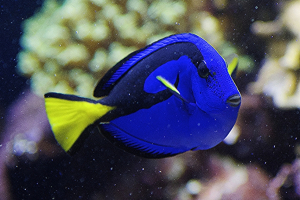 This June Disney released the anticipated Pixar Ani­ma­tion Studios sequel Finding Dory to earn the largest ani­ma­ted film opening receipts in North America ever. The popularity of the original Finding Nemo in 2003 led to re­portedly increased demand for clownfish like Nemo for pets; some concerned environmentalists worry that a si­mi­lar effect may now occur with Pacific blue tangs, Dory's species. Blue tangs (Paracanthurus hepatus), like Dory (Figure 1), inhabit coastal coral reefs where they graze on algae. This activity serves a key role within the reef eco­sys­tem by preventing algae overgrowth and coral suf­fo­ca­tion.

Corals are tropical marine invertebrates that secrete a hard calcium carbonate exoskeleton to form colonies of genetically identical polyps. Though coral can capture prey, they obtain most of their nutrients through a microbial symbiosis with photosynthetic dinoflagellates. That re­la­tion­ship is supported in turn through a second level interaction be­tween the dinoflagellates and ni­trogen-fixing rhizobia. (Look for more about this to come in Thursday's post.)

Of course, the complex structures of a coral reef ecosystem include not only the interactions be­tween species, but also on abiotic factors. Anthropogenic effects like global warming, pollution, tourism, and development can directly contribute to reef decline, but can also indirectly harm corals by altering species interactions to interfere with symbiosis (or turn it bad) and stress coral immunity. 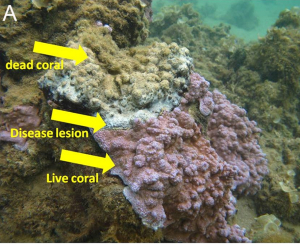 Black band disease is one significant threat to corals ex­acerbated by abiotic stresses that upset microbial in­ter­species interactions. Involving species from all three Do­mains of life, this polymicrobial dis­ease was the subject of a recent minireview by Sato et al. Videos on this dis­ease and its effects in Hawaii are available from the Ha­waii Department of Land and Natural Resources (DNLR video) and the United States Geological Survey (USGS video).

A visibly ­dark band consisting mostly of fi­la­men­tous cy­a­no­bac­teria characterizes corals infected with black band disease (Figure 2). About 1 mm thick, this microbial mat migrates along the surface of the coral up to 1 cm a day, causing necrosis and leaving de­nu­ded skeleton in its wake. Observations by scanning electron microscopy have revealed that these cy­a­no­bac­teria can even bore into coral tissue. Yet, cyanobacteria aren't typically associated with ani­mal virulence and tissue invasion. So just how does black band disease start, and what is actually causing the cellular death? 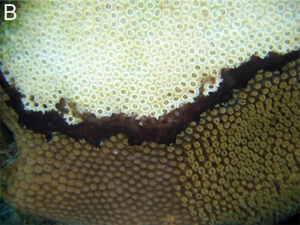 As a phenomenon that currently can only be studied in situ, the answer to the first question is largely unknown. The disease has mostly been observed in its latter stages, once the signs are readily visible. The trigger to its onset and the possibilities of its transmission remain uncertain. What is known is that smaller cyanobacterial patch le­sions precede the appearance of black band disease in some individually tagged corals. A recent coral mi­cro­bi­ome study by Meyer et al. found that one of the cy­a­no­bac­terial species commonly tied to pa­thoge­ne­sis, Roseo­filum reptotaenium, is often present in healthy coral as well. How­ever, other reports (for ex­am­ple) identify dif­fe­rent cyanobacteria groups (Blennothrix or Tri­cho­des­mi­um species) in pathogenic lesions.

Regardless of what triggers the cyanobacteria to pro­li­fe­rate and dominate as a larger, ringed mat, there are data suggesting that upset balances in local biogeochemical cycling lie at the heart of black band disease. Fi­la­men­tous, photosynthetic cyanobacteria dominate the pathogenic biofilm, but unsurprisingly they are not alone.

A Polymicrobial Disorder of Sulfur Cycling

Aside from the dominant cyanobacteria the microbial mat of black band disease contains diverse bacteria, most notably sulfide-oxidizing (Beggiatoa) and sulfate-reducing bacteria (such as De­sul­fo­vi­brio). Eukaryotic microbes (fungi) and a novel lineage of Archaea have also been detected within black band disease mats. Whether these latter organisms are simply associated with the microbial mat – or whether they are really actively growing – is still unknown, so their role in the disease is particularly unclear (though see below for more on the Archaeal member). How­ever, the disease-associated bacteria involved in sulfur cycling have an evident part in coral tissue damage. 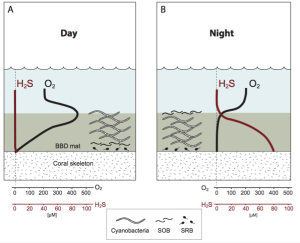 Figure 3. Illustration from Sato et al. (2016) of the biogeochemistry within the polymicrobial mat of black band disease during A the day and B the night. SOB = sulfide-oxidizing bacteria and SRB = sulfate-reducing bacteria. Source

Intense sunlight and warmer weather both enhance black band disease, due to the increased levels of pho­to­syn­the­sis during the day by the cyanobacteria. This leads to high oxygen concentrations at the surface of the mi­cro­bial mat and a steep oxygen gradient down through the mat to the coral surface. (Figure 3A). During the night (Figure 3B), members of the sulfide-oxidizing bacteria mi­grate to the surface of the mat where they use the oxy­gen produced by the cyanobacteria for energy through oxidation of any hydrogen sulfide they've obtained (see below).

Meanwhile, the cyanobacteria also utilize the oxygen for their respiration, causing an extremely sharp decline in oxygen concentrations between the coral surface and the surrounding sea water beyond the microbial mat. The re­sultant anoxic conditions across the black band disease biofilm microenvironment at night creates highly anoxic conditions near the coral surface where sulfate-reducing bacteria are able to thrive, producing abnormally high concentrations of hydrogen sulfide that can now feed the daily-motile, sulfide-oxidizing bacteria. 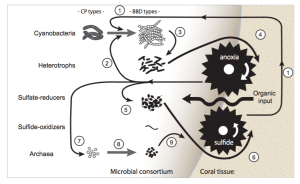 This creates an interlinked, positive-feedback loop of mi­cro­bial biochemistry that provides a model for black band dis­ease pathogenesis (Figure 4). According to this model, early stages of bacterial succession during dis­ease development (including cyanobacterial successions from types do­mi­nant in patches to fi­la­men­tous types do­mi­nant in black band disease) form a microbial con­sor­tium of interlinked elemental cycling. Together, anoxia and high sulfide concentrations kill coral cells, releasing more organic compounds into the microbial mat to fur­ther drive the cycles.

Interestingly, the novel member of Archaea found specifically associated with black band diseased coral has a phylogenetic lineage that suggests that it may form a syntrophy with sulfate-reducing bacteria. This means that the Archaea may sig­nificantly enable high sulfide production within the mat, which would arguably be the first known example of an Archaea contributing to animal dis­ease and cellular damage.

Where to Go from Here?

Black band disease involves a shift in the coral microbiome from one dominated by gamma­pro­teo­bac­te­ria to a more diverse consortium of microbes, coinciding with a proliferation of cy­a­no­bac­te­ria and subsequent disruption of sulfur cycling that together cause coral tissue necrosis. This broad understanding is still a simplification. This polymicrobial disease surely has many details and mechanisms remaining to be uncovered, including how/why the disease begins, its degree of transmission, how other species contribute to the disease, and what role commensal or symbiotic microbes may play in protecting their coral host.

Observed differences in black band disease prevalence across the spectrum of coral species sug­gest that differences in host immunity (including species-specific differences in symbiotic mi­cro­bi­omes) likely play a large role in disease susceptibility. But characterization of this, as well as ge­ne­ral host response to infection, remain for future research studies.

The aforementioned new metagenomic study by Meyer et al. also identified a secondary me­ta­bo­lite of cyanobacteria (lyngbic acid) that displays strong inhibitory activity against domesticated Vi­brio quorum sensing in the lab and within the context of native coral-associated Vibrio lu­mi­nes­cence. The potential roles that quorum-sensing inhibition may play within the development or per­­sistence of black band disease is also a matter ripe for exploration.

Aside from further research into the coral reef ecosystem and the microbes involved in either its salubriousness or sickness, there is also the matter of abiotic factors that affect coral health. Sci­en­tists and other concerned citizens actively pursue better management of global conditions that affect coral reefs, increased public awareness of reef importance, and greater political and social movement toward its protection and remediation. 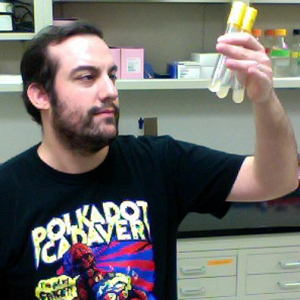