Deep in the Amazon, a supervillain of microscopic proportions strikes fear into the ganglion of ho­nest tree-dwelling ants in every canopy. Myrmeconema neotropicum is a parasitic nematode, one of the countless species in the phylum Nematoda that exist in nearly every location on Earth. For many, parasitism is a topic that can elicit fascination, laughs (Figure 1), or horror. 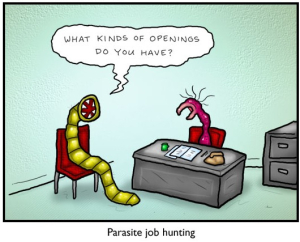 Compared to its other tetradonematid brethren, Myr­me­co­ne­ma neotropicum stands out as a particularly devious and resourceful roundworm. This nematode infiltrates and establishes an intimate housing arrangement with its only known host, the South American ant Cephalotes at­ra­tus. After setting up shop inside the ant and re­pro­du­cing, this tiny, thread-like squatter then proceeds to make some dramatic physiological changes while its host is none the wiser. The most shocking change occurs when the nematode changes the ant's gaster – the cau­dal portion of the abdomen (as seen in Figure 2) – into a bulbous berry that is ripe for the picking (Figure 3). Un­for­tunately for the ant, its new red rump only serves to provide a colorful target for fruit-eating birds passing overhead.

This nematode takes the role of being a manipulative parasite to creative new heights, altering the phenotypic expression and behavior of the ant so it becomes a fruit-mimicking vessel for the ne­ma­tode to board a bird and be released throughout the rain forest.

Parasitism for Dummies: A Guide to Remodeling Ant Gasters

Once the fertilized eggs of Myrmeconema neotropicum are deposited via bird feces, they are picked up by worker ants foraging for food and brought to the colony. The ant larvae that are fed the bird poop also receive a dose of the fertilized nematode eggs. Inside the infected larvae, the eggs hatch and the worms migrate to the ant gaster, where they mature. After a larva matures through the pupal stage, male and female worms begin to copulate. Males perish shortly after mating, but the females live on to produce hundreds of eggs in the gaster.

Figure 2. The basic anatomy of an ant. M. neotropicum is localized in the ant gaster. Source

An incredible series of changes now takes place following the deposition of Myrmeconema eggs in the ant's gaster. The typical Cephalotes ant is a heavily armored insect, called the "turtle ant" for good reason. Infected ants look strikingly different; their waxy black cuticle now turns a bright red (Figure 3). A recent study published in The Jour­nal of Parasitology speculates that a few possible me­chanisms may be responsible for this transformation: morphological changes of the exoskeleton or the tissues lining the gaster; production of new pigment or removing ant melanin; or a combination of these possibilities.

Arthropods like turtle ants are covered by exoskeletons. These suits of armor are woven together from a latticework of various proteins and lipids to form a cuticle barrier, using a process called sclerotization. Exoskeletons also serve as a source of nourishment for the nematode. The re­sear­chers measured the thickness of the exoskeleton of infected and healthy ants using scanning electron microscopy. This revealed quite a difference: the cuticle of infected ants was nearly 23% thinner than that of their healthy counterparts (Figure 4). 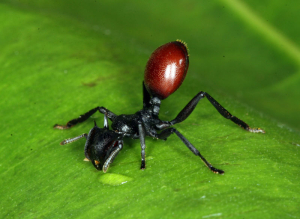 Figure 3a. An infected ant compared to a heal­thy ant (Fig. 3b). Its abdomen is poised in the air, a red flare flagging down a free flight. Source

But would a thinner exoskeleton in infected ants result in such an unusual color morph? As stated previously, a combination of a thinner cuticle and the translocation of pigment through the gaster easily could. The sunlight penetrating the jungle canopy now passes through the thinner ant gaster, which like a prism now alters the light to produce the red color. In tandem with the thinning of the cuticle, Myrmeconema may also be causing a me­la­nin disruption in an infected individual. While we tend to think of melanin as important for determining hair or skin color, it is also an extremely versatile compound in a host of other organisms. In particular, melanin plays a crucial role in the innate immune response of insects. When a microbe invades an insect, its immune system is activated by components unique to microbes like lipopolysaccharides or peptidoglycans (See Elio's in-depth description on this immunity here). Scientists Cerenius and Söderhäll also detail how me­lanin plays a crucial role in encapsulating and destroying pathogens in arthropods like the ant. It is possible that the nematodes' effect on the ant gaster not only thins the cuticle, but manages to shut off the proteinase system and other factors like melanin that prove to be fatal to foreign in­va­ders. Only further research could tell us by what means Myrmeconema disrupts the melanization process, but it has already proven to have a formidable parasitic toolkit at its disposal. 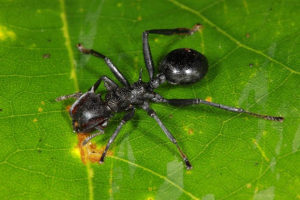 Parasitism is a powerful force that influences the be­hav­ior of the afflicted host. Following in­fec­tion, Myr­me­co­ne­ma makes the industrious turtle ant become nothing more than a clumsy ma­ri­o­nette. Infected Cephalotes show entirely different behaviors compared to healthy ants: they be­come lethargic and fail to display any of their characteristic alarm pheromones. Research con­duc­ted by S.P. Yanoviak and colleagues showed that certain morphological changes are associated with the strange behavior of the infected ants. By dissecting the gasters of infected individuals, they found that the ventral nerve cord was consistently atrophied, and that a unique structure called the postpetiole junction that links the abdomen to the ant's thorax was also com­promised. This caused the red "berry-gaster" to readily detach from the ant, likely due to the weight of the payload the ant has to carry. The researchers hypothesized that another forager ant could easily pick up the gaster (without dismantling its comrade) and bring it home – another means to continue the nematode lifecycle. The additional weight of the gaster and compromised motor function of the infected ant make predation rates increase significantly. Interestingly enough, despite the added weight of the nematode eggs (the infected are up to 40% heavier), the parasite imposes no discernible metabolic cost for its host compared to healthy Cephalotes atratus ants.

The relationship of Myrmeconema neotropicum with Cephalotes atratus is highly specific. Some scientists are eager to point out that this parasitic association is the perfect example of an "ex­ten­ded phenotype", a term coined by famed writer Richard Dawkins. In this case, the tiny nematode has evolved to manipulate the behavior of its host (the ant) via fruit mimicry just for the sake of improving its own fitness. The notion of an extended phenotype becomes even more complicated when an intermediate host, like the bird, is introduced into the equation. Though the bird does not directly transmit the parasite to the turtle ant, it is worth mentioning that it serves to increase the dispersal of the parasite amongst the ant population. 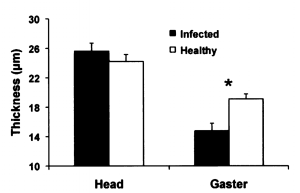 The modification of a host's behavior by a parasite is the subject of considerable interest and theoretical scrutiny. While a handful of parasites are studied intently in ve­te­ri­na­ry medicine and agricultural science, others like Myr­me­co­ne­ma continue to operate in the shadows, ex­ploi­ting the internal machinery of the ant in ways that are still unclear to researchers. Regardless of theory, I cannot help but marvel at the multiple physiological and be­hav­ioral effects that Myrmeconema neotropicum imposes on the Cephalotes atratus ant. It truly is the ultimate pa­ra­si­tic villain (or hero, if you prefer)! 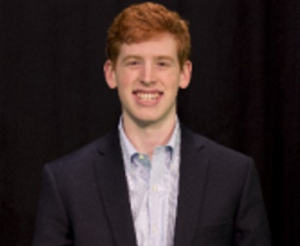 Mike is a native of Buffalo, NY. A new graduate of Canisius Col­lege, he studied Animal Behavior and Ecology, and during his senior year he had the opportunity to take the microbiology class taught by STC Associate Blogger Daniel Haeusser. The class helped kindle a passion for the weird and wonderful world of microbes and a new appreciation for the pro­kar­yo­tes that often get ignored in general biology. Working at a small animal hospital and having previous experience at a zoo, Mike gets to see a variety of microbial and parasitic afflictions up close and it is for this reason that he loves to read and write about para­si­to­lo­gy. In the future, Mike plans to attend veterinary school while continuing to learn about the burgeoning field of microbiology.