Catch as Catch Can 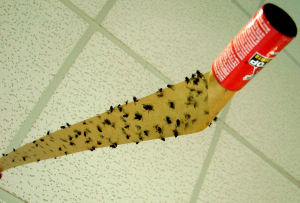 The much admired late marine microbiologist Ralph Le­win coined the term "ixotrophy" to describe how certain bacteria catch their prey by having a sticky surface (Iχo- is derived from the Greek for "sticky" and iχos means bird­lime, the name of the gluey stuff used for trapping birds). Many readers, at least the older ones, will be reminded of flypaper. 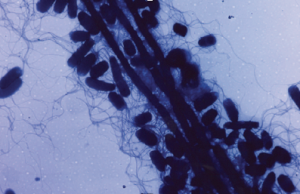 The bacteria endowed with this talent are species of Sa­pro­spira, gliding members of the phylum Bacteroidetes. (Novel and exciting mechanisms of gliding motility have been recently discussed by Nan and Zusman.) Sa­pro­spi­ra­ceae are also found in biofilm communities that col­o­nize algal surfaces (i.e., are epiphytic). Perhaps the best studied is the marine Saprospira grandis, which is com­mon in coastal zones around the world. It produces a sticky substance on its surface that ensnares flagellated bacteria, eventually lysing them and using the lysate as food. It has been aptly called "A Grand Predator on the Seashore".

Lysis takes place through direct cell-to-cell contact and not through secreted bactericidal substances. In­ter­est­ing­ly, heat killed cells are not caught. S. grandis also make "rhapidosomes", needle-like structures that re­semble phage-tail-type bacteriocins such as the R-type pyocin of Pseudomonas aeruginosa. The rods are com­posed of two hollow cylindrical structures that are stri­king­ly similar to tail components – core and contracted sheath – of various phages, e.g., the T-even coliphages. Are they parts of defective phages? Are they involved in killing the prey? Much is left to be learned… 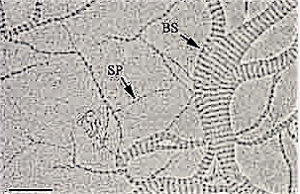 Ixotrophy is not a simple process, but its several stages can be sorted out. First comes the trapping of the prey cells on the surface of the predator. The prey cells are caught by the tips of their flagella. What it is about the tips that makes them especially recognizable remains to be explained. The trapped prey cells are then trans­lo­ca­ted to one place along the predator cells, usually its pol­es. The predator eventually digests the prey and uses its contents for food. Adhesion does not depend on the an­ti­ge­nic properties or handedness of the prey's flagella. The flagella need not be active, as nonmotile cells with straight or otherwise nonfunctional flagella are also trapped, although at lower efficiency. Catch­ing the flagella by the tail is not the only way that Saprospira kill their prey but is certainly the most dramatic one. 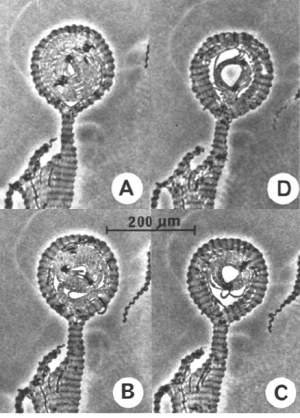 Saprospiras also actively prey upon diatoms. They par­tial­ly degrade the diatoms' cell walls at the contact sites, then bacteria penetrate and lyse the diatom cells. This matters because these diatoms are used as a living food for the larvae of some sea urchins and bivalves.

Predators like saprospiras may be indeed useful in con­trolling the unwanted blooms of cyanobacteria, such as those often seen in eutrophic lakes and reservoirs. Such blooms can be disastrous to health and the environment. Some cyanobacterial blooms make high­ly toxic substances that kill fish, domestic animals. At least one class, the microcystins, are hepatotoxins that can cause tumors in humans. Such blooms are hard to control, as inexpensive procedures are not really available. In addition, some Saprospiraceae actively hydrolyze proteins in activated-sludge waste treatment plants, so they play a role in the cycling of organic material. 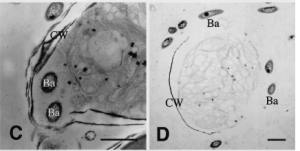 Predation in the microbial world is full of ingenuity. Traps are laid, bullets are fired, signals are emitted, and now, sticky stuff is laid out. A challenging world for some, a re­warding one for others. Is anybody safe? So, don't you wonder, who preys on Saprospira?