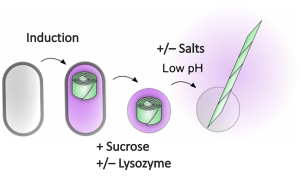 Figure 1. E. coli  cells were induced to pro­duce R-bodies and soluble mCherry (violet). These cells were then sphero­plasted with lysozyme to re­move the cell wall and treated with salts (me­thyl­amine hydrochloride and potassium ben­zo­ate) to destroy proton homeostasis in con­junc­tion with a buffer change (pH chan­ge). Cells were imaged in flow cells by fluorescence mi­cro­scopy to record their behavior, a cartoon is shown here. Mo­dified from Source

Intro  Imagine you equip your standard E. coli cells with a few additional ge­n­es, conveniently placed on plasmids and under control of inducible promoters. You grow the cells and induce the expression of these additional ge­n­es. Not long after, the cytoplasm of the cells turns red­dish, when looked at under the fluorescence microscope, due to expression of a fluorescent protein, mCherry, en­coded by one of the 'few additional genes'. Conspiciously, most of the 0.5 x 2 µm-sized cells are by now stuffed with single large "inclusion bodies" that, when examined un­der the electron microscope, turn out to be pro­te­i­na­ce­ous tapes tightly rolled‑up to barrel-shaped hollow cy­linders with a diameter of ~0.5 µm and a width of ~0.5 µm (Figure 1). That's what expression of repA – repD, the other four 'additional genes', brought about. Next, you treat the cells with lysozyme that breaks down their cell walls. Such wall‑less cells, called spheroplasts, need to be osmotically stabilized to keep them from bursting, there­fore you add sucrose to the cell sus­pen­sion. When you now lower the pH of the medium, the barrel-shaped coils un-roll in a blink, from the inside, telescope fashion, and form tubes ~165 nm in diameter and up to 20 μm(!) long. ZAP!  (you can watch a movie of this zap!-ing here). These long tubes deform and puncture the sphe­ro­plasts' membranes – maybe twice actually, due to their lengths – thus mixing the contents of the bacteria with the medium: the mCherry color leaks out (Figure 1). Among biologists, these ve­ri­ta­ble stilettos are commonly known as R-bodies, whose study goes back to 1938 when Tracy Sonne­born first described "killer" strains of the ciliate . This story, how researchers found out that the "killer" trait of Paramecium aurelia is due do the ability of its kappa particle – one of its several bacterial endosymbionts – to produce these R-bodies that under appropriate conditions virtually stab their victims is worth a separate post, today it's just looking at R-bodies.

Picture #38  Electron micrographs of coiled and ex­ten­ded R-bodies within bacterial cells were known since the mid-1960s but Quackenbush and Burbach were, to my knowledge, the first to show in their paper from 1983 electron micrographs of purified type 51 R-bodies (Figure 2). The enormous differences in size of the compact, con­tracted form (panel a) and the partially (b) or fully un-rol­led, extended form (c) likely made taking these pictures a hell of a job for the electron microscopist (Note that in panel a the magnification is ~3x higher than in panel c). But despite the rather poor quality of the printed figure (and even worse in the PDF version due to poor scan­ning) the dimensions of both forms can be measured and some structural details are readily seen: the tightly coiled-up 'tape' of the contracted form with distinct lay­ers (a), and un-rolling of the tape from the inside in the partially extended form (b). These R-bodies were purified from E. coli cells that had been transformed by a re­com­bi­nant plasmid carrying a 2.8 kb DNA fragment from a much larger plasmid of the Caedibacter taeniospiralis 47 endosymbiont of a Paramecium tetraurelia strain. The cloned fragment codes for four small proteins RebA – RebD with molecular weights of 11.6, 11, 6, and 8.8 kD, respectively. Only the two larger ones finally form the R-body while the function of the two smaller ones is un­known. But because their expression is required for R-body formation they might be involved in stitching to­gether the larger ones to assemble the proteinaceous 'tape'. Although not a scientific expression, "stitching" is appropriate here because the protein tape must contain several thousands of RebA and RebB monomers to ob­tain a final tape lengths of ~20 µm, and – a nightmare for the biochemist! – these tapes are highly resistant to de­naturing conditions, treatments with "in combinations of 8 M urea, 1 to 10% SDS, and up to 5% 2‑mer­cap­to­etha­nol or di­thio­threi­tol. Incubations were carried out at 100°C for up to 1 h. Additionally, incubation at 37°C for 2 h in 8.6 M guanidine hydrochloride or 6 M guanidine thio­cy­a­nate, followed by dialysis and standard treatment with the final denaturing and reducing sample buffer, did not result in greater R-body dissociation. Also, boiling the R-bodies for 5 min in dilute hydrochloric acid (pH 1.8) had no noticeable effect on dissociation. The unusual stability of these structures sug­gests that covalent bonds other than disulfide linkages are involved in the poly­me­rization of sub­unit polypeptides". Intriguingly, un-rolling and re-winding of the R-body coil can be repeated more than 200 times by just changing the pH of the suspension, no energy in­put re­quired. Apparently, a pH‑dependent conformational switch between looped and α‑helical struc­ture of a small stretch of ~20 amino acids in the C-terminal part of RebA (114 amino acids) is sufficient to drastically change the structure of the entire multimer. Although anything but a common theme in biology, such pH‑dependent larger-scale conformational rearrangements in proteins are known from hem­ag­glu­ti­nins of eukaryotic viruses. 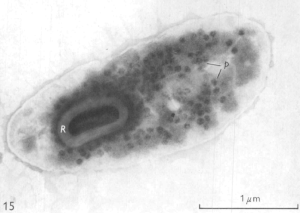 Always involved, of course: phages  The plasmid-driven production of type 51 R-bodies by the Caedibacter en­do­sym­biont for the benefit for its ciliate host Paramecium is such an intricate system and has evolved to such an ex­tent that is offers hardly any clue on how it came into existence in the first place. Suspiciously, however, several other R-body-producing Caedibacter endosymbionts of paramecia lack plasmids yet electron micrograms of their R-bodies show them, more often than not, surrounded by and attached to capsomer-like structures and capsids of helical or icosahedral phages, some of the latter with tails (Figures 3+4). Phages of endosymbionts are in­tri­gu­ing in their own right but it has not yet been de­mon­stra­ted that they carry the genes required for R-body pro­duc­tion. Yet, if indeed such (pro)phages were responsible for R-body pro­duc­tion, it would not be too far fetched to speculate that R-bodies might have been evolved as a means for the phages to "leave" their host. Stabbing him with a stiletto to this end seems costly and unwieldy compared to the elegant – but equally brutal – method other phages employ: pun­ching holes in their hosts' membranes and cell walls using holins and lysins, respectively. 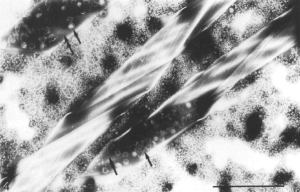 Outro  Venerable research objects *), R-bodies may ne­ver­the­less have a promising future in ap­pli­ca­tions, me­di­cal applications to be precise. Polka and Silver speculate, for example, that not so far from now R-bodies could be packed into epitope-tagged artificial vesicles together with cytotoxins as cargo, to be delivered by the blood­stream specifically to cancer cells for endocytosis. Once in­side the target cell within a food vacuole that acidifies over time, this lowering of the pH would trigger un-rolling of the R-body into its stiletto form. Piercing the mem­bra­nes of both, of the ve­sicles and concomitantly of the va­cu­o­le, would release the cytotoxin cargo directly into the cy­to­plasm of the cancer cell; no 'collateral damage' as with chemotherapeutics usually occurs. These researches have already characterized mutant R-bodies that un-roll at different pH values, thus providing a solution to problems that could arise from targeting less acidic vacuoles, e.g., pha­gosomes of certain types of macrophages. Turning a stiletto into a micro-scale scalpel, or lan­cet, remains a formidable task, but once achieved it could challenge micro-electro-mechanical systems (MEMs), the darlings of nanotechnology. There's a caveat, however: biochemists would have to find out how to improve the biodegradability of R-bodies – think of the known nasty im­pact on cells of carbon nanotubes and asbestos fibers, the finest of which are within the size range of the R stilettos.

*) and also venerable guests in STC ! Elio pointed out to me that R-bodies were first mentioned in the 16th post of this blog, back in 2007. The R-bodies mentioned there are made by epibionts of the ciliate Euplotidium, and which belong, as judged by their 16S rRNA signature, to the Ver­ru­mi­cro­bia, while the R-body producing Caedibacter endosymbionts of Paramecium belong to the very dis­tantly related Gammaproteobacteria. It is presently not known to which extent these R-bodies are related – if at all – despite their structural similarities.