« Where in the world is ERV-Fc? Tracing the spread of a virus over 30 million years, 28 species, and 5 continents. | Main | 'Adopting' a Pathogen »

An Epistle From the Past 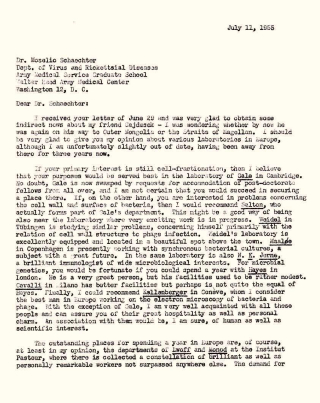 I recently found a letter I received in 1955, giving me advice about where to apply for a postdoc in Europe. In those days, doing a postdoc in Europe was nearly de rigueur for young Americans who wanted to follow an academic career. I’m not entirely clear what the reason was, as there were plenty of front-line labs active in molecular biology in the US. Surely the joyful prospect of a year or two abroad played a big role. At any rate, I was caught in this and began to plan ahead of time which lab would suit me best. So, I consulted with Gunther Stent (1924-2008), a member of the legendary early phage geneticist group led by Max Delbruck. I knew Stent slightly from a couple of Cold Spring Harbor symposia I had attended as a graduate student and he seemed to be friendly enough. His letter confirmed his good will towards a young scientist.

The suggestions Stent made turned out to be a mixed bag, skewed surely by my having stated an interest in “cell fractionation” (by which I meant what is now called bacterial cell biology). So, his is not a complete list of the most attractive labs in Europe. Missing conspicuously are the labs in Cambridge, England, where Crick and Brenner presided. But most of the ones Stent included were indeed outstanding. 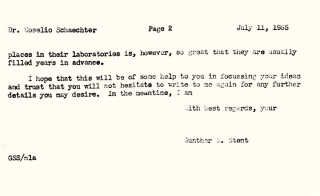 Note that even in those days, looking for a postdoc took time and effort. The most attractive labs had long lists of applicants; thus forethought was called for even then. Eventually, I chose to apply to Ole Maaløe’s lab in Copenhagen, guided in part by what Stent had to say about the work on synchronous cultures that was being done there. This, it turns out, was a very happy choice. I joined the lab at the inception of what became known as the “Copenhagen School of Bacterial Growth Physiology.” See here for some of its history. Somewhat paradoxical is that when I arrived, Maaløe was trying to determine if his synchrony experiments were due to an artifact. They were indeed, as we soon found out. So, until Helmstetter and Cooper invented the baby machine, the subject did not fulfill the “bright future” that Stent had predicted for it. Regardless, I was surely influenced by Stent’s measured opinion and grateful for his willingness to help me.

The reference in Stent’s letter is to Carlton Gajdusek, a medical adventurer if there ever was one. He went on to get the Nobel Prize for showing that Kuru, the first human prion disease, was infectious. If you wonder about my address on the letter, I was at that time serving as a private in the U.S. Army, assigned to a lab doing research on rickettsiae. Gajdusek was at Walter Reed at the time as a civilian, during one of his infrequent stateside sojourns. He was one of several outstanding scientists I got to know there, some of who were my barracks-mates. That was during the Korean War, when practically everyone my age was drafted. Scientists during working hours, soldiers the rest of the time! Four days after my discharge, my wife and I were on a ship to Copenhagen.