« A Special Issue | Main | This Summer I Went A-conferencing » 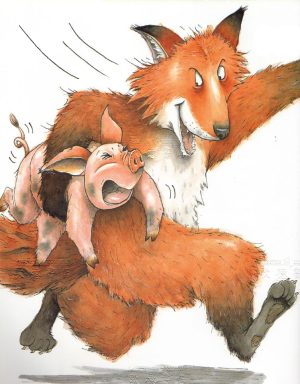 Figure 1. Piggybacking the winner, woodland-style. (from My Lucky Day by Keiko Kasza)

In the adorable kid's book My Lucky Day  (Fig. 1), a wily and disarmingly cute piglet tricks a fearsome fox into gi­ving him a spaghetti dinner, a bath, and a massage. In the end, Mr. Pig slips away after Mr. Fox passes out from exhaustion. We later learn that, far from being an in­no­cent victim, Mr. Pig has made a career out of exploiting other fearsome predators, including wolves, bears, and coyotes.

Swapping the roles of natural enemies is always good for a laugh. But My Lucky Day  is different from your typical cartoon romp, where roadrunners and rabbits outsmart and humiliate their bumbling hunters. In My Lucky Day  the prey doesn't just es­cape – he profits from the pre­da­tor. In effect, Mr. Pig becomes a parasite, duping Mr. Fox into using resources and energy for Mr. Pig's benefit.

Thus, in My Lucky Day  we see the two faces of ecological exploitation – parasitism and predation – juxtaposed against each other. But in the real world, we think of these two strategies as being fundamentally different and undertaken by very different types of animals – the lion and the roundworm couldn't be more different (Fig. 2). But as is so often the case, when we zoom in to the microscopic level, the boun­da­ry lines get a lot blurrier.

Consider viruses – in particular, bacteriophage. Ask an introductory microbiology student about viruses and you're likely to hear from them that viruses are "obligate intracellular parasites". But is it true? Antinomian firebrand that I am, I like to encourage students to consider the possibility that phage are sometimes parasites, and sometimes predators.

Classically, virologists have described two very different reproductive strategies for viruses (Fig. 2). Lytic  viruses infect cells, hijack their genetic machinery to churn out more viruses, and then es­cape by blowing the cell up. Although they don't have the ability to move about under their own power, lytic phage nevertheless spread rapidly through their environment, "hunting" for their pre­ferred prey cells. Conceptually, this process resembles predator behavior – the phage "hunt", kill, and consume prey cells, much like a lion stalks and kills prey animals *) (Fig. 2 A+B). 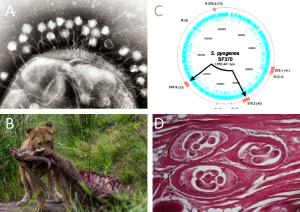 In contrast, lysogenic  viruses are capable not only of lytic growth but can also incorporate themselves as a pro­pha­ge into the host's genome. Prophage don't kill their host as long as they remain dormant inside the chromosome, but maintenance of the extra DNA and the few proteins that are constitutively expressed by integrated prophage is a burden on the cell's resources, and often the host cell gets nothing in return. The lysogenic virus, more than the lytic one, closely resembles our classic image of a pa­ra­site – lurking within the host, often barely noticed, but able to "wake up" and initiate disease or even kill under the right circumstances (Fig. 2 C+D).

What tells a lysogenic phage that it's time to switch from lytic to lysogenic lifestyle? Classic models, mostly based on phage that infect enteric bacteria like E. coli, suggest that the switch is driven by the likelihood that phage will be able to find new hosts after lysis (Fig. 3). When prey cells are abundant, we expect phage to be lytic; but when prey are scarce or when nutrients are starting to run out, it makes more sense for the phage to integrate into its host's chromosome and "piggyback" until better times arrive.

How well does this conceptual model apply to "wild" viruses? Most studies of environmental pha­ge have focused on lytic viruses in aquatic ecosystems. Consistent with Fig. 3, aquatic lytic phage evolve to infect abundant hosts as opposed to rarer community members tend to dominate – an evolutionary dynamic with the memorable name "Kill the Winner" or KtW (Thingstad and Lignell, 1997). KtW keeps microbial diversity high in aquatic ecosystems – basically, if evolution puts a bacterium on a trajectory to "win" against its close competitors, the lytic phage rapidly evolve to put it back in its place. Figure 3. A classic model for understanding the switch between lytic and lysogenic viral life cy­cles. Author's own graphic

Much less attention has been given to lysogens in nature. We know they're out there – you can inflict DNA damage on field samples and the prophage "decide" it's time to flee the sinking ship. Studies show that the frequency of inducible prophage goes up as total cell density goes down, just as we would expect from the classic model (Fig. 3).

However, a recent study from Ben Knowles, Forest Roh­wer, STC's very own Merry Youle, and many others (Knowles et al., 2016) shows that the ecological switch from lytic to lysogenic in nature is more complex than Fig. 3 predicts. In the absence of lysogeny or other com­plicating factors, one would predict a constant ratio of viruses to microbial cells, such that the virus-to-microbe ratio (VMR) remains constant as population density increases. In other words: more bacteria, more viruses. When Knowles et al. examined microbial and viral counts from 223 coral reef sam­ples, they found that VMR decreased as microbial density increased, indicating that more bacteria, LESS viruses was the rule, exactly the opposite of their initial expectation. Moreover, a meta-ana­ly­sis of literature where both microbial and viral counts were performed showed that this ob­ser­va­tion held across most ecosystems: VMR decreased with increasing cellular density in 8/11 eco­sys­tems studied.

Surprisingly, more bacteria, less viruses was even the case when specific communities were ma­ni­pu­la­ted to increase growth rates and cell densities. When Knowles et al. added a cocktail of easily metabolized carbon compounds to coral reef seawater samples and counted viruses and mi­cro­bes, they again observed that VMR consistently decreased as populations became denser. These incubations were pre-filtered to eliminate the influence of density-dependent grazing by protistan predators, suggesting that the decrease in VMR was entirely driven by interactions between vi­rus­es and their hosts.

The negative relationship between cell density and VMR suggests one of three things:

The first possibility has been called "King of the Mountain" (Thingstad et al., 2014) dynamics (these virus folks sure have a way with words), but there was no evidence of it in 66 Pacific samples, for instance based on the prevalence of CRISPR sequences (which act as a bacterial adaptive immune system against phage infection). Those same 66 samples also disprove the second possibility – there was actually a negative relationship between taxonomic diversity and microbial density. The third possibility, on the other hand, was supported by analysis of coral reef metagenomes, where the abundance of genes involved in insertion and excision of prophage was significantly cor­re­la­ted with microbial density.

Why is lysogeny favored at high host density? The pre­sen­ce of prophage can confer many potential benefits on their hosts under the right circumstances, but the au­thors think the answer here comes from the fact that many lysogens are protected against superinfection – that is, a cell carrying a prophage cannot be infected and killed by the lytic version of the same virus. As viral den­si­ties increase, the fitness benefit of carrying a lysogenic parasite increases essentially without bound. Not to be outdone in the snappy name category, Knowles et al. call this "Piggyback-the-Winner" (PtW) dynamics. While the comparison to KtW is obvious and intended, if the protection vs. superinfection explanation is correct, then it's the presence of the piggyback rider that makes a cell a winner, whereas in KtW dynamics evolution favors viral targeting of cells that have become winners on their own, for other reasons.

At a minimum, Knowles et al.'s paper means that we have to rethink our models for how viruses affect microbial ecosystems. But it's entirely possible that we need to adjust how we think about microbial ecological dynamics in general as well. We've tended to think about viruses "in the wild" as lytic agents whose major ecological role is to liberate nutrients, increasing the rate of nutrient cycling. For instance, viral lysis in the ocean has been hypothesized to keep nutrients in the pro­duc­tive surface layer by releasing soluble compounds from sinking biomass (Wilhelm and Suttle, 1999). But Knowles et al.'s results suggest that strongly lytic behavior might only be favored in a very narrow (indeed, "narwhal-shaped") range of microbial abundances (Fig. 4). While the nar­whal's tusk happens to fall in the part of the graph that contains microbial abundances common in the modern ocean, what happens if future conditions (eutrophication, increased stratification) increase or decrease that number?

In conclusion – we all knew viruses were important, but we underestimated how complex their ecological strategies were, and how many tricks they and their hosts have developed over their billion-year war with each other. Mr. Pig and Mr. Fox could probably learn a thing or two from the narwhal…

*) Technically speaking, phage are parasitoids, meaning that they spend a good deal of time intimately associated with their food source, which is killed by the parasitoid during its normal life cycle. Parasitoids are common amongst insects, and straddle the conceptual line between parasite and predator. 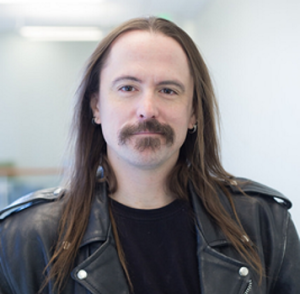 Jeffrey is on the faculty of the Department of Biology, University of Ala­ba­ma at Birmingham. He previously wrote that "his research interests are pretty much coterminous with those of Morrislab. He's also very interested in the history of the human species, and suspects that if he had it all to do over again he might have chosen to study molecular anthropology instead of microbiology."