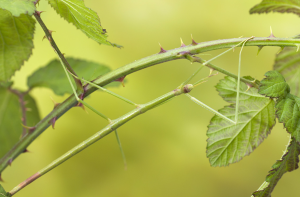 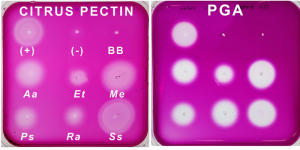 Being vegan  The stick and leaf insects, the Phas­ma­to­dea, are not only herbivores, but, in fact, are exclusively leaf-feeding, 'obligate folivores' in scientese. This promp­ted Matan Shelomi and coworkers to study in more detail the plant cell wall degrading enzymes (PCWDEs) of six se­lected species, including the just mentioned Ra­mulus ar­temis. They dissected individual animals and prepared tissue samples of the anatomically distinguishable an­te­ri­or and posterior midguts. Extracts of the samples were (classically) analyzed for enzyme activities (Fig. 2), but most­ly spent on assembling their transcriptomes, i.e., se­quen­cing all transcripts present in the sample at de­tec­table amounts. This, the authors argue, is a sensible ap­proach to assess the metabolic properties of species for which the genome sequences are not available. Only genes that are actively expressed are detected this way, but whether their mRNA is actually translated into pro­tein remains an open question. Also, discrimination be­tween host and symbiont mRNAs is hard – a clear limitation of this approach when studying PCWDE ac­tivities in insect guts. By 'database mi­ning' (basically protein homology and motif sear­ches in data bases, but more refined ) Shelomi et al. identified in their transcriptomes more than twenty PCWDE gene families, representing various isoforms of cellulases, glucanases and pec­ti­na­ses. Most of these PCWDE genes were differentially expressed, i.e., at ~10x higher rates in the an­terior midgut as compared to the posterior. They take this as a first molecular hint for one specific function of the anterior midgut: breakdown of large polysaccharide molecules. That these genes were also found in genomic DNA from brain tissue of the sample animals, a tissue that should be essentially symbiont-free, the authors suggest that they are true phasmatodean genes, not sym­biont genes. While most of the PCWDE genes showed homology to those of other insects, the pec­ti­na­ses were strikingly homologous to bacterial genes. 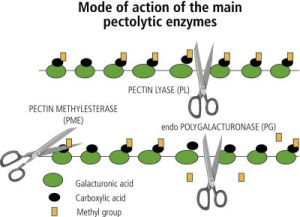 In a subsequent study, Shelomi et al. characterized the GH28 family PG transcripts of the Phasmatodea in more detail, and obtained strong evidence that they were not derived from bacterial symbionts. A majority of the PG transcripts had 3' poly-A tails – a hallmark of eu­kar­yo­tic mRNAs that is more sparsely found in bacteria – and full-length transcripts encoded signal peptides typical of eukaryotes. Each PG-encoding contig also had multiple matching genomic reads from (symbiont-free) brain tis­sue that uniquely aligned to them ('contig' and 'reads' is sequenese and refers to partially assembled se­quen­ces and singleton sequences, respectively). When cloned in the baculovirus system and expressed in Sf9 insect cells, roughly 90% of 50 tested PG transcripts gave enzymatically active proteins, which indicates that these represented mRNAs of active genes. The expressed proteins allowed the authors to determine individually their exact enzymatic spe­ci­fi­ci­ty (with assays similar to those shown in Fig. 2 ), and indeed, endo- and exo-polygalacturonase activities were found, both in good correlation to the similarities of the respective sequences.

Pectinase Phylogeny  Homology searches for GH28 PG genes in the close phylogenetic 'neigh­bor­hood' of the studied species, that is among the Euphasmatodea branch of the Phasmatodea, were unsuccessful. No evidence for such genes was detected in the single sequenced species of the ge­nus Timema, belonging to the Timematodea sister branch of the Euphasmatodea, or among other members of the larger Polyneoptera family (Fig. 4). These findings led the authors to conclude that, unlike the cellulase genes, the GH28 PG genes do not have a deep evolutionary history within the insects, which made a search for their source even more intriguing. 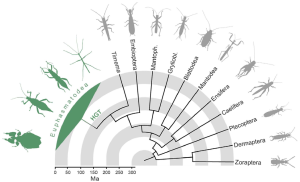 Figure 4. Presence of endogenous pectinases in polyneopteran species. The HGT occurred after Euphasmatodea and Timematodea diverged. Polyneopteran phylogenetic relationships and divergence times in millions of years ago. Source

One of the perks of the sequencing craze in recent years is the abundance of protein sequences that now allows one to derive rather robust phylogenies due to now hav­ing sufficiently large sample sizes for statistical eva­lu­a­tion. In their first study, Shelomi et al. had compared their GH28 family PGs with 46 other GH28 PGs from bac­teria, fungi, ne­ma­todes, plants, and two insect fa­mi­lies, Hemiptera (ci­ca­das, leafhoppers, aphids & Co.) and Co­leoptera (beetles). The Phasmatodea PGs formed a mo­nophyletic group with the PGs of Gammaproteobacteria (and one Be­ta­pro­teobacterium). Taking a closer look in their new study for a possible bacterial donor for the PGs in the Phasmatodea, the authors find that all Phas­ma­to­dea PGs branch off as a subgroup within a monophyletic group of PGs from En­te­ro­bac­te­ri­a­ceae, including Erwinia piriflorinigrans and Pantoea stewartii. PGs found in a number of leaf beetles (Chrysomelidae) cluster together with those from Bac­te­roi­de­tes, while PGs from root-knot nematodes (Nematoda, genus Meloidogyne) cluster with a set of GH28 PGs from Betaproteobacteria and a distinctly different set of GH28 PGs from En­te­ro­bac­te­ri­a­ce­ae. The two sets of enterobacterial PGs share ~30% identity, while the identity within each group rising to >60%. Thus, acquisition of PGs by the nematodes and the leaf beetles via HGT is conceivable, but has not yet been conclusively proven. It seems clear, however, that an ancestor of the extant stick insects (Phasmatodea) picked a GH28 PG gene from an ancestral relative of the Erwinia/Pantoea-type enterobacteria, while the nematodes and leaf beetles drew from different sources.

Perspective  Not really an unprecedented breakthrough finding, the presence of a pectinase gene of bona fide bacterial origin in the genomes of several Polyneoptera species – acquired by their com­mon ancestor 60 – 100 Ma ago and retained throughout its subsequent speciation, including gene duplications and specificity changes through mutations – adds to the notion that "long-dis­tance" or even cross-kingdom horizontal gene transfer (HGT) is probably less exceptional than sur­prised biologists first assumed. The acquisition of a carotenoid desaturase and cyclase gene pair of fun­gal origin by pea aphids – giving them a pinky-ish phenotype – appeared almost ex­cen­tric at first (featured here in STC). But many more examples have been found since (one mentioned here in STC). It's a safe bet that even more examples will be found among species – from whatever branch of the tree of life – that happen to share a particular niche. As symbioses among various smaller and larger things turn out to be the rule rather than the exception, it would be surprising to not find some frequency of gene-sharing among these "cohabitants". However, the phy­si­co­che­mi­cal obstacles to moving intact DNA across membranes (conjugative plasmids, phages, and vi­ru­ses know these obstacles well enough!) have kept promiscuous gene swapping at bay. So, bio­lo­gists, ease up, You will always find 'species' and not find inextricable 'gene bins'!

Yet 'detecting' horizontally transferred genes in a genome comes at a price. It is impossible to ob­tain 'experimental evidence' for HGT by meticulous observations and/or carefully controlled bio­che­mical experiments. Instead, biologists have to do lots of math, statistics that is. HGT can only be 'detected' by (meta-)genomic and transcriptomic analyses, and in silico translation of con­spi­cu­ous sequences into protein. (Spoiler: DNA sequences are of no use here as in a genome any "in­com­ing" foreign genes are streamlined within a few hundred generations, i.e., revamped to match host AT-content, codon usage, mRNA stability requirements, cognate regulatory sequences (pro­mo­ters), 'decoration' by introns, translation signals, and address labels for exported proteins). Aligning protein sequences to detect similarities is pretty straightforward*), but calculating evo­lu­tio­nary distances – or building robust phylogenetic trees, for that matter – is complicated and phylogeneticists have yet to agree on a statistical 'gold standard'. Clearly, procedures similar to those agreed upon by particle phy­si­cist (including the 5-sigma criterion) need to be adopted by biologists. 'Evidence' will thus be supplanted by 'probability'.

Tangential  Among hard-core entomologists – the folks studying insects – the 'walking sticks' are known as Phasmatodea, or Phasmids for short. Apparently, there had been an incidence of "Ho­ri­zon­tal Term Transfer" three decades ago that went largely undetected. We molecular biologists also knew phasmids: cloning vectors that carried, in addition to the usual (dsDNA) plasmid rep­li­ca­tion origin, a secondary origin derived from phages like f1 that, given a helper phage, enabled pro­duction of single-stranded DNA perfect for Sanger sequencing. Yet, as soon as we learned (while still in the pre-PCR days) to sequence the inserts in double-stranded plasmid vectors using cus­tom-made primers – in both directions at once, without fumbling with phasmids or tedious sub­cloning in M13 vectors, yeah! – phasmids rapidly fell into oblivion. Thus endeth the confusion of terms.