« Standing on the Shoulders of a Tiny Giant | Main | Where in the world is ERV-Fc? Tracing the spread of a virus over 30 million years, 28 species, and 5 continents. » 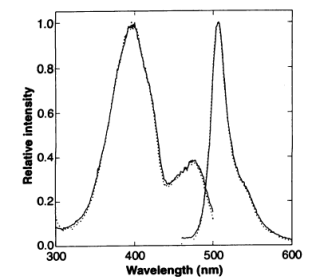 When was green florescent protein (GFP) first used with a prokaryote? Or with a eukaryote for that matter? It seems that the first paper on the subject was by Chalfie, Tu, Euskirchen, Ward, and Prasher, published in Science in 1994. For this work, Chalfie received the 2008 Nobel prize (with Shimomura and Tsien). The original purpose of this work seems to have been to determine if additional proteins are needed to form the light-absorbing component that imparts color to a molecule, known as the chromophore (spoiler: they aren’t; GFP does just fine by itself). How did they determine this? They cloned the GFP gene into E. coli (in a plasmid, under control of the T7 promoter) and C. elegans. They then showed that, when irradiated with longwave ultraviolet light, the cells harboring the cloned gene produced green light. Happily for them, the E. coli construct gave off light of the same spectrum as the GFP from the original source, the jellyfish (Aequorea victoria). The authors noted that inserting the GFP gene did not affect bacterial growth, thus this procedure was deemed to be innocuous (Please note that we now know that there is always a cost associated with the production of unneeded proteins which results in longer lag phase and transient slowing of growth rate. We now know better, there is cost to the bacterium associated with the production of unneeded proteins but that does not diminish the power of using GFP in bacterial studies.

On the one hand, the bacterial part of the paper is scant. Shown is a picture of an agar plate with growth on two halves: under UV light, the non-plasmid-containing bacterial streak was nearly colorless, while the streak of the bacteria containing the plasmid, fluoresced green. They didn't bother to show what the cells looked like under a fluorescent microscope, but one can safely assume that they turned green all right (should I have called this post "Un-pictures Considered?"). On the other hand, they reported quite a few interesting facts on what they saw in the cloned nematode (the expression was in specific cells only, as GFP was under a b-tubulin related promoter. There is more here for the C. elegans aficionados).

The authors point out that before their work: "Several methods are available to monitor gene activity and protein distribution within cells. These include the formation of fusion proteins with coding sequences for b-galactosidase, firefly luciferase, and bacterial luciferase. Because such methods require exogenously added substrates or cofactors, they are of limited use with living tissue." A nice point. 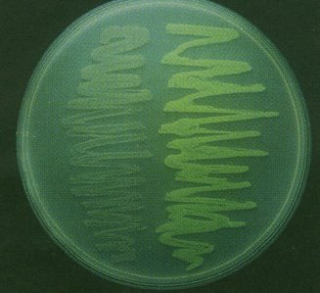 Figure 2. Expression of GFP in E. coli. The bacteria on the right side of the plate have the GFP expression plasmid. Cells were photographed during irradiation with a hand-held long-wave UV source. Source

In addition, they presciently declare other virtues of GFP, to wit: "We also envision that GFP can be used as a vital marker so that cell growth (for example, the elaboration of neuronal processes) and movement can be followed in situ, especially in animals that are essentially transparent like C. elegans and zebra fish. The relatively small size of the protein may facilitate its diffusion throughout the cytoplasm of extensively branched cells like neurons and glia. Because the GFP fluorescence persists after treatment with formaldehyde, fixed preparations can also be examined. In addition, absorption of appropriate laser light by GFP expressing cells (as has been done for Lucifer Yellow-containing cells) could result in the selective killing of the cells."