This Summer I Went A-conferencing

In July, I attended the 2016 Gordon Research Conference on Microbial Stress. This is an august mee­ting with 2 decades to its name. See here for what transpired. The subjects presented were broader than the name of the meeting suggests and included many aspects of mi­cro­bial phy­sio­lo­gy and genetics, touching even on ecology and evolution. "Stress," especially in the world of mi­cro­bes, is not the easiest of terms, so it's best to treat it nonchalantly. The meeting organizers, Edu­ardo Groisman and Dianne Newman get my praises and my thanks for their skill in selecting both topics and speakers and for shepherding us around both deftly and kindly. Their efforts paid off: the meeting was characterized by comradery, intense interactions, and plain fun. 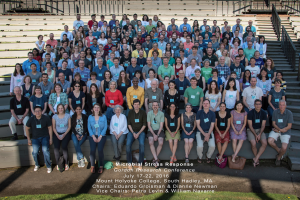 To me, this was a rare experience because I have not at­tended many small specialized meetings in recent years. This kind of total immersion is exciting for obvious rea­sons, and I realized how much I had missed it, both on the scientific and personal levels. These days I am often the oldest person at any meeting, or nearly so, and I look for acquaintances among the people whose hair is white or absent. Here, I had the sunny chance to meet and con­verse with people who had hair and of different co­lo­ra­tion. What a treat! In addition, I had been chosen to give the Neidhardt Lecture, which honors my friend Fred Neidhardt who has contributed so much to this field.

But there was also a matter of a different tinge. I found that many of the presentations were be­yond my capacity to understand them. Granted, some of this had to do with my restricted amount of Sitzfleisch (read ADD, which I possess in no small measure). But, try as I may, some of what was presented required more comprehension than I currently have. Of course, to some extent every­one can complain of the same thing. Nobody is an expert on everything. But for me this is com­poun­ded by my receding reminiscences of working at the bench and, of course, by the subsiding number of synapses in the lobes of my noggin.

Still, it was a decidedly rewarding experience. Let me mention some of the threads that I found among the presentations (especially the oral ones and with apologies for the ones I have omitted). The relatively novel and exciting topic of small regulatory RNAs bookended the meeting, with a talk by Susan Gottesman to lead it off and by Gisela Storz to conclude it. In between, a number of people, young and not so young, disclosed the deepening of our understanding of key phy­sio­lo­gical goings-on. These included presentations on transcriptional networks (A. Schmid), trans­la­tio­nal control (M. Buttner, M. Ibba), the roles of sigma factors (H. Todor), two-component regulatory systems (P. Casino), quorum sensing (K. Xavier), pH regulation (L. Kenney), polyphosphate (U. Ja­kob), restriction modification systems (R. Roberts), and c-di-GMP (U. Jenal's lab). Well represented were also biofilm formation (N. Stanley-Wall, L. Dietrich, I. Kolodkin-Gal) and other group be­hav­iors (M. Ackermann). News to me were reports on the rather frequent incorporation of ri­bo­nuc­leo­tides into DNA (L. Simmons) and the degradation of t-RNAs during the stringent response (S. Sven­ningsen).

Several of these topics were considered through the prism of antibiotic resistance (D. Andersson, G. Walker, D. Nguyen, and others). Included were persistence tolerance, and dormancy (S. Helaine, S. Bark, M. Pontes). So was the effect that population structure has on it (N. Balaban), kin re­cog­ni­tion (K. Gibbs), as well as its origin in geological times, perhaps going back to the Cambrian (M. Gil­more). Again, Also discussed was metal toxicity and resistance (J. Helmann, Y. Jiao).

Perhaps a more unconventional set of stress responses were covered by the presentations of no­vel phenomena, such as N. Shikuma's complex and unexpected assembly of phage tail-like par­ti­cles into arrays that guide the differentiation of marine tube worms (discussed in STC here), and the discovery in A. Komeili's lab of non-magnetic stress-induced iron inclusions, the "ferrosomes." In this category of exciting microbial constituents we heard about bacterial steroids and my fa­vo­rite molecules – the hopanoids – made by ca. 20% of all prokaryotic species and, in transformed state, constituting perhaps the most abundant of all organic compounds on earth (P. Welander).

Implausible as it seems, very little was said of microbiomes and metagenomics, and CRISPRs were barely mentioned. Still, we managed….

If I had to sum up my sense of the meeting, I would say that bacterial physiology is exuberantly alive. It is being studied in depth, reaching for molecular mechanisms, and in breadth, as new and exciting images and patterns are discovered. I may have sentimental reasons for lamenting the eb­bing of ecoli-centrism, but the expansion of the microbiologist's horizons more than makes up for that. These indeed are exhilarating times for microbial physiologists.