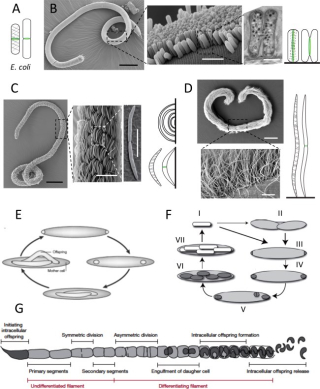 Figure 1. (A) Drawing of a pre-divisional and a di­­vid­ing E. coli. (B–D) Three marine worms sym­bionts: (B) Scanning electron mi­cro­graphs of La­xus oneistus, its bacterial coat, and one dividing ectosymbiont, and drawings of a non-di­vid­ing and of a dividing ectosymbiont. Scale bars are 100 µm, 3 µm, and 500 nm, from left to right. (C) SEMs of Eubostrichus fertilis, its bacterial coat, and one dividing ectosymbiont. Scale bars: 100, 20, and 5 µm, from left to right. (D) Scan­ning electron micrographs of E. dianeae and its bacterial coat, and drawing of a non-dividing and a dividing ectosymbiont. Scale bars: 200 µm (top) and 10 µm (bottom). FtsZ rings are in green, dashed lines show the hypothetical lo­ca­li­zation of MreB protein, and black lines, the host cu­ticle. (E) The life cycle of Epulopiscium spp. Polar, FtsZ-based division produces two daughter cells that are engulfed by the moth­er cell. Eventually, growth of the offspring over­takes that of the moth­er cell until the latter de­teriorates and the offspring emerge (slightly mo­di­fied from Angert). (F) Life cycle of M. po­ly­spora.  Mature endospores (I) are ingested by a guinea pig and germinate in the small intestine. A few un­der­go binary fission (II) but most un­der­go bipolar division (III). As M. polyspora pro­ceeds into the caecum, the polar fore­spores are engulfed (IV). Early fore­spores may still undergo binary fission (V) and elongate (VI). As the fore­spores develop into mature spores (VII), the moth­er cell lyses and the cycle begins anew (from Ward and Angert). (G) Schematic re­pre­sen­tat­ion of an SFB filament highlighting stages of its growth and differentiation (from Schnupf et al.) Source.

The August 2016 issue of Environmental Microbiology is a treasure trove of ar­ticles on symbiotic relationships. I happen to have a soft spot for the subject (am I symbiotic with symbioses?), so this issue is a handsome gift. I will comment on just a few of the articles, chosen with some effort from all this wealth.

Bacterial Cell Biology Outside The Streetlight

“This review describes the reproductive oddities dis­play­ed by bacteria associated – more or less intimately – with multicellular eukaryotes.” So starts a most readable ar­ticle by Sylvia Bulgheresi, an expert on variations on the theme of (humdrum?) E. coli-type cell division. It turns out that non-canonical modes of cell division are actually plentiful, their visibility hidden by the “streetlight effect” (looking under the streetlight for the lost key). Con­sid­ered here are such gems as bacteria that adhere to the skin of some marine worms by their ends and divide longitudinally (the Z-ring is appropriately longitudinal to the cell’s long axis, the better to stick to their host’s cu­ticle; discussed here). Also included are the long cres­cent-shaped bacterial “braided ropes” that cover the surface of other worms; the gargantuan Epulopiscium’s engulfment of its young by the moth­er cell; rhizobia in root nodules; the segmented filamentous bacterium of the mouse gut; various insect endosymbionts, plus plus.

En­vi­ron­men­tal Treasures: Co-Isolation Of The First Marine Chlamydiae And Its Protozoan Host

Chlamydia is an ever expanding phylum, con­sist­ing of some eight families and growing. No longer just the agents of the most common STD worldwide and the eye infection trachoma, chlamydiae include a large number of symbionts of protists, marine worms, and arthropods. These non-human chlamydiae are called "environmental" (a term I dislike because for the chlamydiae, humans are an environment, too). It is thought that this is just the tip of the chlamydial iceberg and that a huge number of other taxa are waiting to be discovered (that’s me­ta­ge­n­o­mics for you!). They aren’t easy to study, as their host of­ten exists out of the experimenter’s reach.

Here’s a report by Pizzetti, Fazi, Fuchs, and Amann on the co-isolation of a chlamydia (actually, two related clusters) and its host, a coastal lake-dwel­ling ameba called Ve­xil­li­fera sp. The two can be maintained to­geth­er in laboratory culture. These new chlamydiae are out­liers, belonging to a separate branch of the chlamydial tree. Using the highly sensitive ca­ta­ly­zed re­porter deposition fluorescence in situ hy­bri­di­za­tion (CARD-FISH), the researchers could see pro­tists with intracellular pleomorphic chla­my­di­ae. These novel chlamydiae are plentiful, up to 5x104 per ml. The abundance of both host and symbiont fluctuate hand in hand with the seasons. Given that “environmental” chlamydiae may cause disease in humans, these findings have public health implications.

The paper is accompanied by an erudite commentary by Viana and Buchrieser that calls the findings "en­vi­ron­men­tal treasures." One reason for this is that chlamydiae will likely be found to be even more widespread and to play important and varied roles in the lives of their hosts. An­oth­er reason is their unique developmental cycle con­sist­ing of two forms – the inert highly infectious "ele­men­ta­ry bodies," and the non-infectious metabolically active and dividing "reticulate bodies." All pathogens and symbionts face distinctive sets of challenges when in transit be­tween hosts as opposed to reproducing within them. Here, the distinction is especially clear, being reflected in the structural and physiological dissimilarities of the two forms. Perhaps the closest known example to this is Bacillus anthracis, which is found as a spore in soils but grows vegetatively in humans and other animals. You’ll agree, chlamydiae deserve more attention.

A Rickettsiales Symbiont Of Amoebae With Ancient Features

According to this paper, a rickettsia that lives sym­bi­o­ti­cal­ly in an Acanthamoeba carries genes that encode for pro­teins with eukaryotic domains, such as ankyrins, leucine-rich repeats, and tetratricopeptide re­peats. Proteins with these domains par­ti­ci­pate in structural protein-protein interactions in eu­kar­yo­tes and are probably involved here in yet unsolved interactions of the bac­te­ria with the host. The rickettsiae live within a host vacuole, and thus have ample chance to interact with host con­sti­tu­ents (see figure). The researchers, from the Ettema and Horn labs, point out that rickettsiae are especially interesting when considering eu­kar­yo­tic evolution, not just because they are abundanct intracellular parasites, but also for being the closest extant relatives of mitochondria. The authors called the rickettsia ‘Candidatus Jidaibacter acanthamoeba’ (alluding to the Jedi in the Star Wars sa­ga). This finding mirrors that of the recently discovered archaeon called Lokiarchaeum (dis­cussed here and locally here), which possesses eu­kar­yo­tic genes involved in membrane trafficking. Eu­kar­yo­ge­ne­sis redux? 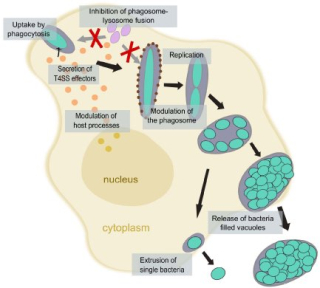 Figure 3. Model of the J. acanthamoeba in­fec­tion process. The symbiont is taken up by pha­go­cy­tosis and releases effector proteins con­tain­ing eukaryotic-like domains via its type IV secretion system. The effectors manipulate processes in the host cell, such as phagosome–lysosome fusion, gene expression and signal transduction. Ribosomes are recruited to the symbiont-containing endosome, and Jidaibacter replicates inside this compartment. The bac­te­ria can exit the host cell by extrusion of single cells or vacuoles, or after host cell lysis. Source

I confess, it never occurred to me to worry about the up­take of hydrogen (H2) from the atmosphere, thinking that it is unlikely to be an abundant gas. But a paper from the labs of Y. Kamagata and P. Constant says that al­though re­latively scarce (0.530 parts per million volume of air), H2 is the second most abundant reduced gas, after me­thane, so pay attention! Atmospheric H2 is de­rived from the burning of biomass and fossil fuels and from the pho­to­chemical oxidation of hydrocarbons. It turns out that H2 is taken up by both soil and plant-dwelling ac­ti­no­mycetes. To quote the authors: "Recently, it has been pro­posed that atmospheric H2 may serve as main­te­nan­ce energy during starvation and spo­ru­la­tion of high-af­finity H2-oxidizing Actinobacteria. H2 treat­ment of soil was known to promote plant growth of both legume and non-leguminous crops."

The authors found the hhyL gene (a subunit of a [NiFe]-hydrogenase) in clone libraries, suggesting that high-af­finity H2-oxidizing bacteria are ubiquitous in herbaceous plants. They say that this is the first report “focusing on plant-associated bacteria possessing high-affinity H2 uptake activity.”

Genomic Characterization of Symbiotic Mycoplasmas from the Stomach of Deep-Sea Isopod Bathynomus sp. 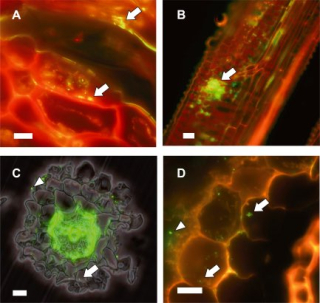 Figure 4. Endophytic colonization of Strep­to­my­ces isolates inside A. thaliana (A, C) and O. sativa (B, D). The image of FITC fluorescence detection by the actinobacteria-specific probes (in green) was merged with a micrograph of phase-con­trast (C) or plant autofluorescence (in red) (A, B, D). The arrows indicate the parts of bacterial cells colonizing xylem or parenchyma (A, B) of stem tissues, and cortex (C) or epidermis and exodermis (D) of root tissues. Some bacteria were outside the root tissues (C, D: arrowhead). The green fluorescence signal around en­do­der­mis (C) was plant autofluorescence. Scale bars, 10 μm. Source

I have long been mystified by the mycoplasmas. Cell wall-less as they are, they would appear to be microbial picogram weaklings. But they are mighty resilient and environmentally highly successful. I can’t say that I ever thought of them as mutualistic symbionts. But they ap­pear to be useful members of the microbiota of the sto­machs of deep-sea scavengers, the isopods. These large cousins of the terrestrial woodlice don’t get much to eat, so they can use all the help they can get. Mycoplasmas may well be in­volved in digesting plant cell walls that drift down to the ocean floor and constitute the main food source for the isopods. They are also thought to be in­volved in the digestive activities of the terrestrial iso­pods.

The evidence? A paper by the labs of L-S He and A. Dan­cin presents the genomes of two phylogenetically similar mycoplasmas found in marine isopodal stomachs, dif­fer­ing in GC content and gene number. The size of their ge­nomes is estimated to be about 780 kb and 698 kb. The 16S RNA of the bacteria is distant from that of my­co­plas­ma symbionts of terrestrial isopods and deep sea shell­fish. Both of those discussed here carry genes for sugar transport and uptake, plus genes for proteolytic enzymes and oligosaccharide degradation. Having genes for sialic acid degradation and transport suggests that they may be involved in the attachment of the or­ganisms to their host’s stomach wall. So, add mutualism to the ecological skills of mycoplasmas. 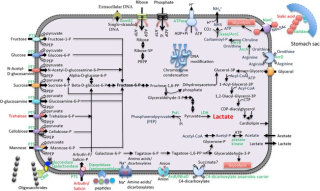 Figure 5. Schematic metabolic model of My­co­plas­ma Bg1 and Bg2. Two draft genomes for Mycoplasma Bg1 and Bg2 were used to predict the metabolism and adaptation strategies. Their genomes being very similar, the sche­ma­tic model is depicted for both. Attachment on the surface of the stomach sac probably occurs only in Bg1 with respect to the identified path­way responsible for hydrolysis by sialidase NanA and cross-membrane transport of sialic acid sugar units. Source