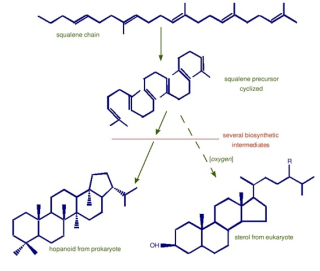 Figure 1. The structure and the gener­alized synthetic pathways of hopanoids and sterols. Source

What is stranger, the fact that hopanoids are possibly the most abundant organic compounds on the planet or that, despite being of microbial origin, most micro­bio­lo­gists have barely heard of them? Just as inexplicable is that a PubMed search for "hopanoid" brings up a paltry total of 102 entries (“DNA” brings up 1,443,241 items!) To drive the point home, there are about 1012 tons of ho­panoids in the Earth’s rocks (that’s over 100 tons for eve­ry human being). No fault of STC Central: we have fea­tured hopanoids several times before (here, here, and here).

Let me recap. What are they? Hopanoids are cyclic mo­lecules that, like sterols, are derived from squalene but end up with an extra ring (five) and an assortment of side chains that characterizes their many varieties. They are made by perhaps one in ten species of bacteria and are constituents of their membranes, the cytoplasmic in gram-positives and prefer­entially the outer membrane in gram-negatives. Hopanoids are thought to act as membrane stiff­eners, which is what sterols do in eukaryotic membranes. This matters to the cells because when phospholipids are the lone lipids, at high temperature their membranes would be too fluid, im­pairing their growth and well-being. Indeed, hopanoids are found prominently in thermophilic bacteria. Archaea do not seem to make hopanoids at all but some thermophilic ones solve their fluidity problem by making long bipolar lipids that span the membrane thickness.

In a recent study from the labs of ML Summers and DK Newman, a genetic approach firms up the conclusion that hopanoids help rigidify membranes at high temperatures. The authors made mu­tants of the filamentous cyanobacterium Nostoc punctiforme that are unable to make any hopan­oids or are impaired in methylation at the C-2-position. The mutant lacking hopanoids grows poor­ly at high temperatures (where they are needed to stiffen the membrane) but better than the wild type at lower ones (where they over-rigidify the membrane). Otherwise, vegetative growth at nor­mal growth temperatures is not affected, indicating that hopanoids are apparently not needed other than under stress conditions.

Both hopanoids and sterols are flat in shape, thus they can readily intercalate in the lipid domains of membranes to rigidify them by negating the effect of the kinks in some of the phospholipids. However, different kinds of hopanoids do not behave in the same way in membranes. Perhaps it is not surprising that hopanoids can substitute for sterols in the infrequent bacteria that require ex­ternal sterols, such as Mycoplasma mycoides. A study by Saenz et al. shows that hopanoids can indeed act as the functional analogues of cholesterol.

Hopanoids are made at relatively low levels except when cells are stressed. In many cells growing normally, they comprise 1-5% of the total lipids but the figure can rise to 50% in Zymomonas, an alcohol-making and alcohol-re­sistant bacterium. A thermophile, Bacillus acidocal­darius, makes seven times more hopanoids at 65° C than at 60°C.

Besides being made as a response to stress, hopanoid production is associated with specific ecological niches. The evidence? A gene required for the C-2 hopanoid methylase, the enzyme that makes of the specific hopanoid 2-methylhopanoid, is fre­quently found in organisms that are involved in plant-microbe symbiotic interactions. Interesting is that the gene is also found in bacterial that are always present in tightly packed microbial biofilms, such as in stromatolites, in hot spring sediments, and in hypersaline microbial mats. Hopanoids are found in the actinomycetes, bacteria that often make aerial filaments during the process of spore formation. This aerial mode of life calls for special membrane properties that may be re­lated to their hopanoid content. Moreover, hopanoids are made by Bacillus subtilis in the act of sporulation. The authors conclude: “The common features of these niches indicate that 2-methyl­hopanoids are enriched in sessile microbial communities inhabiting environments low in oxygen and fixed nitrogen with high osmolarity.“ 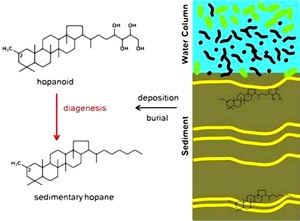 Figure 3. Bacterial lipids such as ho­panoids can act as biomarkers when buried and preserved in the sedimentary rock over billions of years. Diagenesis refers to the chemical, physical, or bio­logical changes that change sediments into rocks. Hopanoid molecules lose most of their functional groups but the basic hopane structure is preserved over billions of years. Geochemists are then able to extract and detect these lipids in ancient sediments. Source

The present study also suggest that hopanoids may be involved in storage of nitrogen-containing reserve ma­terial. The cyanos they studied (N. punctiforme) make a spore-like resting cell called the akinete. Here, hopanoids in the outer membrane are required for tolerance to stresses other than those resulting from high tempera­tures, e. g, treatment with the peptidoglycan-degrading enzyme lysozyme. Also, the hopanoid-deficient mutant does not accumulate in its akinetes granules of an amino acid polymer called cyanophycin, which is used to store nitrogen (and carbon).

So, the story of what hopanoids do and when they are needed is a checkered one indeed. In fact, here is an­other sticky aspect to it. The requirement for hopanoids in plant symbioses holds for Alphaproteobacteria such as the rhizobia. It does not hold for the cyanobacterium Nostoc, where the hopanoid mutants do just fine during symbiosis with the hornwort Anthocerus punctatus. The general conclusion is that hopanoids are biomarkers for environmental stresses. Just how they do this remains to be elucidated, probably on a case-by-case basis.

Now for the best part. Hopanoids don't much decompose even across vastly long geologic times: some are 1.65 billion years old! No wonder there is so much of the stuff. They are found in rocks and petroleum deposits (chances are, you have them in the oil of your car’s engine). Even if made in small amounts, accumulation counts. I didn’t find why hopanoids and, for that matter, sterols, are so stable to heat and pressure. I found a reference to cholesterol being stable, but only over a period of three decades. The structure of all these compounds looks complicated, which offhand would make one think that they should be labile. But organic chemistry is what it is. Note that dur­ing the processes of rock formation from sediments (diagenesis), some of the side chains often get modified or lost, leaving behind mainly the pentacyclic skeletons (called the hopanes). However, methyl groups at the C-2 and C-3 position tend to be preserved, a useful fact in paleontology.

Given their longevity, hopanoids are important biomarkers for paleontological studies. They are "molecular fossils" that indicate bacterial activity in the Archaean period (that’s an era, not to be confused with our friends, the archaeal organisms). It was thought originally that hopanoid syn­thesis required oxygen, so it was surmised that some cyanobacteria carried out oxygenic photo­syn­thesis long before oxygen became abundant in the atmosphere. However, the non-oxygenic photosynthesizer Rhodopseudomonas palustris makes such compounds anaerobically and in good amounts. Anyhow, hopanoids are good stand-ins for bacteria in fossils, just as sterols (or their degradation products, the steranes) are for eukaryotes. Losing some of their side chain constituents makes finding them a bit murky. A most enlightening review on these subjects by Newman et al. was recently published.

Do hopanoids have uses, other than serving as biomarkers? Surprisingly, there are claims that some pentacyclic terpenes, including hopanoids and non-hopanoids, have antiparasitic properties when administered orally to laboratory animals. Affected are protozoa and nematodes. Perhaps they over-stiffen the membranes of these parasites?

So there you have it, hopanoids are molecules that by any reckoning are clearly outranked by the information molecules, and paradoxically dominate the chemical landscape of this globe. One can wistfully imagine what our science would be like if nucleic acids or proteins had such longevity. All it would take is a few samples of billion year-old DNA molecules to resolve countless arguments about evolution. Oh well, you can’t win 'em all!

We recently discussed the hopanoids in the podcast This Week in Microbiology #134 ("Lipids That Live Forever").