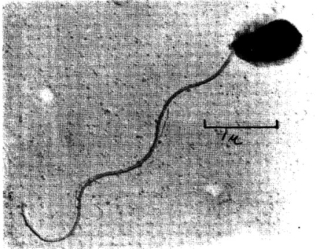 E. coli may eventually get dethroned from its lofty po­si­tion as the best studied, best known, and perhaps best exploited organism on this planet. The upstart is Vibrio natriegens, a marsh-dwelling gram-negative bacterium that grows 1.4 – 3.9 times faster than E. coli in the la­bo­ra­to­ry, depending on the medium (it also depends on which strain of the latter you're talking about; there is a report of an E. coli strain with a doubling time of 12.5 minutes!). It has been thought for some time that V. na­triegens is the fastest growing microbe known. Being salt-loving, its growth medium contains salt. The species name, by the way, is derived from the Latin "natrum" and "egere," meaning "needing sodium". It was originally described as a Pseudomonas.

True to their word to elevate V. na­triegens to a new eminence as a model organism, two similar pa­pers on the subject appeared almost simultaneously. One paper, by members of three Boston labs at Harvard, Boston University and Tufts, with George Church as the last author made inroads into several of V. natriegens' physiological and genetic properties that needed for it to become a standard tool. A parallel study by researchers at Synthetic Genomics, Inc., reports head-to-head growth comparisons between V. natriegens and E. coli and the development of similar genetic tools, including inducible GFP vectors. Both sets of authors developed a number of household me­thods for the preservation and handling of the organism. 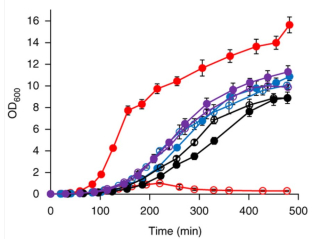 Here are some of the things that we already know. V. na­triegens is not pathogenic to humans. Its optimum tem­pe­ra­ture is 37°C. Unlike E. coli, it can grow on su­crose, a fact of possible industrial relevance. By comparison with its rival, it has two chromosomes, together 0.5 Mb larger in size and, in keeping with its fast growth rate, carries about 30% more rRNA operons and tRNA genes that are activated by strong promoters (as per a previous paper the Gourse lab). Most of its genes are associated with me­tabolism. Both papers report decent transformation frequencies. Several transducing phages are available, including some usable for introducing plasmids. The nas­ty Vibrio cholerae toxin-carrying CTX phages do not ap­pear to reproduce in this organism. Transposon mu­ta­ge­nesis works well here, allowing the construction of trans­poson libraries.  A CRISPRi system is also available.

The authors of the Boston paper state that E. coli has a “lengthy growth rate,” which I posit depends on one's view of time. I guess that if one could get vi­sible colonies on agar in a few hours instead of overnight, one could perhaps double the rate of ex­periments. The authors say: "A faster growing bacterial host would be highly desirable given the protracted and iterative nature of biological research." However, I think the limiting factor is often the time required for digesting and understanding the data, so in some cases, not much is gained. But I suppose that if you're growing them in a 100,000 gallon fermentation tank, every minute counts. It depends…

Posted on September 08, 2016 at 05:01 AM in Methodology, Physiology & Genetics, Teachers Corner | Permalink