Figure 1. Apparatus used in studying the growth of bacteria in a continuous flow of broth. Source

In their paper written in 1930, two US Department of Agriculture scientists, L. A. Rogers and E. O. Whittier, probably described the first continuous culture device for bacteria. It had several of the features of what later became known as the chemostat: a growth chamber, a way to deliver fresh nutrient at a set rate, a constant level device (a side tube) to remove spent medium at the same rate as that of addition of fresh medium, and a sampling port. The drawing shows that the liquid level almost fills the growth chamber, but that is clearly mistaken, as shown by the tube on the right side, which would remove liquid and maintain the growth volume constant at about 2/3 the flask contents. In this study the medium was exchanged at a single rate, adding fresh nutrient at “about a drop per minute… sufficient to displace the medium in the flask once in 24 to 30 hours.” Their device would allow one to establish the growth rate of the culture by changing the rate of fresh medium inflow. These authors did not take advantage of this feature, which later was key to most chemostat experiments.

The device was used to grow Streptococcus (now Lactococcus) lactis and E. coli. Both organisms maintained a fairly constant population level. Over a period of 16-30 days the colony counts were about 1 x 109 [cells?]per ml for the former and 2-8 x 109 cells per ml for the latter. In an experiment where the two were grown together, they eventually stabilized at a ratio close to 1:1. In most experiments, the doubling time was about 30 hours. In another arrangement, they removed the excess fluid through a bacteria-retaining filter. To avoid accumulation of bacteria on the filter, they cleverly used a rotating brush that periodically cleaned the surface. The results were about the same as when the overflow was removed by the side tube.

This was pioneering work but the device lacked two other key features of the modern chemostat. One is a way to ensure that the incoming nutrients are thoroughly and rapidly mixed in the culture vessel. The other is to keep the concentration of inflowing nutrients at a level low enough to ensure that the cells are in a growing state. In this study, the bacteria indeed had entered the stationary phase. The medium used was an unspecified nutrient broth, which does not lend itself to a precise definition of the concentration of limiting nutrients. 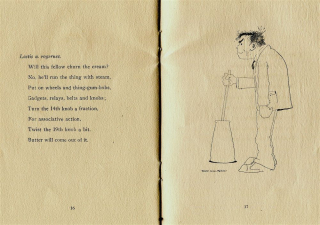 The chemostat was later championed by Monod and by Novick and Szilard. None cited the paper described here. For further information, see a brief history of the field of growth physiology.

The authors of the paper were among the most notable dairy microbiologists in the first half of the 20th century. Lore A. Rogers was chief of the Research Laboratories of the Bureau of Dairy Industry, USDA for nearly 4 decades. Among other contributions, he improved the manufacture of Swiss and Roquefort cheeses, and found ways to limit growth of fungi in condensed milk and to prevent losses in making evaporated milk. He served as president of the ASM and became an honorary member. He was greatly influential in the continued well-being of the American Type Culture Collection. In a letter W. C. Frazier said: "Dr. Rogers was a typically inventive Maine Yankee, who would contrive gadgets at the least suggestion, and who had his office next door to the machine shop for good reason." E. O. Whittier worked in the Eastern Utilization branch of the USDA, then joined Rogers at the Bureau of Dairy Industry. He worked on physiological properties of bacteria of dairy importance, including their influence on the redox potential of milk.