A Sweater and a Shirt Came Before Just a Shirt 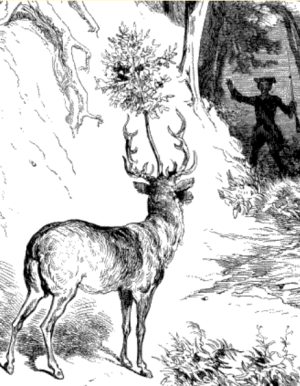 Figure 1. Munchausen meets again the stag he shot at with cherry pits, by Gustave Doré. Source

It is not unexpected that the contemplation of bacteria and archaea should focus so much on the nature and im­portance of their cell envelopes. Here, after all, is the in­ter­face between the cell's interior and the outside world. It is also what a host perceives early on when becoming infected. Plus, as was eventually discovered, prokaryotic envelopes are made up of quite unique and intriguing chemical components. So, at the envelope is where one can find much of the action.

With regard to the structure of their envelope, bacteria can be divided into monoderms, those with a single "skin", and diderms, those with two. An imperfect but useful generalization is that monoderms tend to be Gram-positive, diderms Gram-negative. So, which came first, the single-clad monoderms or the doubly-clad di­derms? What kind of question is that, you ask? Isn't it logical that the simpler structure should arise first and then serve to make the more complex one? That has been a favored explanation for some time (for an ex­am­ple, see here). Well, not infrequently, logic in evolution takes paths that defy a seemingly commonsensical explanation. So "diderms-first" has been pro­po­sed as early as 2006 by Cavalier-Smith.

The monoderms comprise two large phyla, the Firmicutes (e.g., Staphylococcus, Streptococcus, Ba­cillus, Listeria, Clostridium, and many others) and the Actinobacteria (e. g., Actinomyces, Strep­to­my­ces, Corynebacterium, Propionibacterium, Mycobacterium, etc.). One of the notable char­ac­ter­is­tics of the monoderms is that their membrane is usually surrounded by a thick peptidoglycan layer. This feature is thought to protect the membrane, in particular from the action of hy­dro­pho­bic compounds. In the diderms, this role is assumed by the outer membrane, whose outer leaflet lipid consist of an archetypical bacterial compound, a lipopolysaccharide called LPS.

This quiet world is made less serene by the exceptions to the rules. One of the most startling of these is that there are Firmicutes that possess two membranes, the external one containing LPS. A didermic Firmicute is hardly what one would expect to encounter. Such apparent crossing of one of the deepest phylogenetic chasms among bacteria seems so unexpected that it reminds me of one of Baron Münchausen's stories: When hunting in a forest, the baron encountered a majestic stag. To his dismay, he realized that he was out of bullets for his rifle. Quickly, he ate a few cher­ries he had with him and inserted their pits in the rifle, shooting the deer in the forehead. The deer went off, only slightly dazed. A year later, the baron found the deer, now sporting a cherry tree on his forehead. He shot him and got meat and dessert at the same time. Now, for a Fir­mi­cu­te to bear an LPS outer membrane seems as unlikely as for a deer to grow a cherry tree on his forehead. Who would have thought of it! 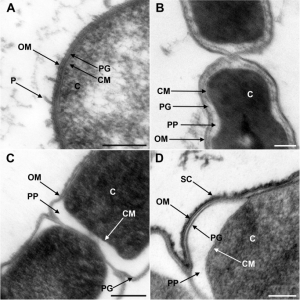 Actually, knowledge of such an extraordinary Firmicutes is not new. The existence of an outer membrane of one of its members, Veillonella, has been known since 1964, although its phylogenetic identity was only revealed much later. Interestingly, the term "outer membrane" was first used with this organism. To acquaint you with Veillonella, members of this genus are commonly found in human oral and fecal microbiomes. They belong to a separate group of Firmicutes, the Negativicutes, which includes agents of biofilm-dependent oral infections and others. And there is yet another separate group of di­der­mic Firmicutes, the Halanaerobiales. These two outlying groups have been studied recently by several groups from the Pasteur Institute, the Biocenter LMU in Munich, and the University of Lyon. Their aim was to resolve the question of the origin of mono- and didermism.

The authors probed into the wide-ranging phylogenomic data available on these organisms. By studying 47 ri­bo­so­mal protein genes, they concluded that the outlying Ne­ga­ti­vi­cu­tes and Halanaerobiales belong to distinct phy­lo­ge­netic lineages, each related to a different Firmicute group. Thus, they are likely to have arisen separately. Not surprisingly, the genes involved in outer membrane biogenesis were found in these two groups only, not in the other Firmicutes. These are genes involved in LPS synthesis and transport, outer membrane protein assembly, the attachment to peptidoglycan, and some others. Unlike what is seen in E. coli, these genes are clustered to­geth­er. Mining the data showed that such genes are found in other bacterial phyla, suggesting that the didermic kind of cell envelope may be present in many more bacterial phyla than is currently thought. In addition, these genes seem to be highly conserved, suggesting that they were present in a common ancestor and did not undergo extensive horizontal transfer.

Here are some genomic details, derived from their phylogenomic analysis: Both Negativicutes and Halanaerobiales carry genes characteristic for the synthesis of the LPS, Lipid A, and the LPS inner core. They also have the genes for a flippase that translocates LPS across the inner membrane and for proteins that transport it to the outer membrane. But not everything is so clear. The au­thors could not confirm the presence of the genes for the synthesis of the O-antigen (the po­ly­sac­cha­ri­de chains attached to Lipid A). On the other hand, the found a single gene of an ancient outer membrane assembly pathway (Bam/Tam), as well as others for proteins that anchor the LPS to the outer membrane. More details about yet other outer membrane physiology-related proteins are presented in this paper. 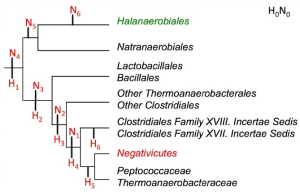 Figure 3. Phylum-level phylogeny of the Fir­mi­cu­tes, the Negativicutes and the Halanaerobiales clearly stick out as separate lineages (Results of AU test for 12 alternative topologies). For less legible figures see Source

Do flagella and pili help us here? In diderms, the flagella have two extra rings at their basal body, called P and L, that serve to insert the structure into the outer mem­brane. Both the groups under study here, Negativicutes and Halanaerobiales, have flagellated members, so what do their flagella look like? Besides the P and L rings, these species have also some monoderm-typical genes, in­di­cat­ing that these flagella may be chimeric structures with both diderm and monoderm features. A similar ar­gu­ment can be made for their type IV pili.

It has been proposed that the outer membrane may have arisen during sporulation and there is at least one bit of experimental evidence in favor of this proposal. A relative of Veillonella, Acetonema longum is a sporeformer that, unlike others of this kind, retains the membrane that covers the developing spore (forespore) for a long time, which means that the cell germinating from it has a double membrane.

Now, what does this tell us about how the outer membrane originated? For what it's worth, di­derms are phylogenetically and ecologically more widely represented than monoderms (although there are plenty of monoderms that cause common human infections, a la staph and strep). The authors fa­vor the view that monoderms are derived from diderms, counterintuitive as this may sound. About the possibility of horizontal gene transfer being involved, they say: "Given the dis­tinct branch­ing of the two diderm lineages in the Firmicutes phylogeny, and the pattern of LPS inheritance similar to all other diderm bacterial phyla, the gene transfer hypothesis would imply a complex scenario consisting of two independent transfers of a very large genomic region." The argument is that acquiring this machinery de novo must be so complex that the opposite event seems more logical. It is easier to lose something complex than to have to invent it anew. The data further suggest that the machinery for making the outer membrane was lost repeatedly in the mo­dern monoderms lineages. Of course, this begs the question of how the original outer mem­brane was invented to begin with. Note that the inference is that LPS was only invented once, which is perhaps to be expected in view of its biochemical complexity.

I wish all this would help figure out why it is that the bacterial envelope comes in two versions. This good question seems unanswerable because both mono­derms and diderms are obviously successful in their habitats. In fact, they often co-exist, as in the human throat or intestine, where they are often found in nearly equal proportions. But that's Nature ‒ full of multiple answers to the same set of problems.

Life was simpler in my youth (but you've heard this from oldsters before, no?). Bacteria were either Gram-positive or Gram-negative (except for Mycobacteria, which could not be so stained) and this division was neatly reflected in the structure of their cell envelopes. We know now of grand exceptions to this scheme and that some Gram-ne­gatives are monoderms, some are Gram-positives, di­derms (discussed in these pages). There are bacteria that indeed remind me of Münch­au­sen's stag with the built-in cherry tree.

You can hear this research discussed in more detail on episode 136 of This Week in Microbiology. Press play to listen now!