Caught in the Act, Literally 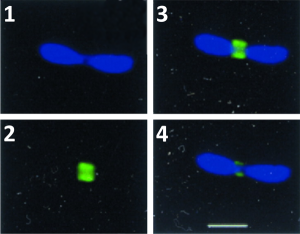 Figure 1. FtsZ–GFP localizes to the septum. 1 In­di­vi­du­al cells of JM109/pZG stained with DAPI (1 μg/ml), viewed for DAPI fluorescence only (DNA staining), 2 GFP fluorescence only, 3 DAPI + GFP composite image, 4 as in 3 but darkened to im­pro­ve visualization of the internucleoid space. Bar = 1 μm. Modified from Fig. 3 of Source

As a bacteriologist, when you are interested in the func­tion(s) of a particular protein you're hardly satisfied with biochemical analyses and studying expression patterns. What you'd really like to know is where your protein is localized, where it's actually active in living cells. None of the numerous stains and dyes used in microscopy are of much help here as they are mostly specific for certain types of macromolecules, not for individual proteins. Al­so raising antibodies against your protein and, sub­se­quent­ly, "staining" thin-sections of cells expressing your protein with, for example, gold-labeled antibodies and looking at them by electron microscopy is, at best, half­ways there because such cells are... dead (see here for a plain refutation of my bold claim). Enter the fluorescent proteins, among which the "green fluorescent protein" (GFP) has become outright notorious. So you might con­sider to fuse the gene encoding your protein with the gene encoding one of the fluorescent proteins. Chances are good that such a fusion protein will not only retain the function of your protein but will become visible within the cell by fluorescence microscopy and thus reveal its cellular localization (Fig. 1). By using time-lapse fluorescence mi­cro­sco­py you might even find positional changes of your fusion protein over the cell cycle, like what Piet de Boer's lab found for the GFP-MinD fusion protein, a proper oscillator. In pioneering work, Andrew Wright and colleagues took this approach one step further and established a method to monitor a given position of the chromosome over the cell cycle by "tagging" the chromosome with an array of lacO lac operators to which a LacI-GFP fusion repressor binds, yielding, under UV light, brightly shining "spots" (termed "foci", plural of the Latin focus = hearth). In STC, we already fea­tured studies that applied exactly this technique to track the path of bacterial chromosomes du­ring replication and segregation to daughter cells, in Pseudomonas and other bacteria. But what about conjugation, the process by which DNA from one bacterial cell (donor) is transferred to another cell (recipient), and thus one of several routes for 'horizontal gene transfer' (HGT)? 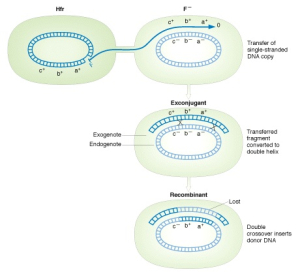 Figure 2. During conjugation, single-stranded DNA (ssDNA) is transferred from the Hfr donor cell to the F– recipient cell. In the recipient, the ssDNA is converted to double-stranded DNA (dsDNA). Depending on their start sites, double-crossover recombination events result in an ex­change one or more donor alleles (a+, b+) with re­cipient alleles (a–, b–). Due to degradation by RecBCD and its inability to replicate, the linear dsDNA (Exo­ge­no­te) gets diluted out of the pro­ge­ny of the re­cipient cell over time. Successful recombination events in the recipient (En­do­ge­no­te) are monitored by phenotypic selection for the expected a+b+ ge­no­ty­pe of pro­ge­ny cells. Source

Conjugation is sometimes likened to 'bacterial sex' but that's a telling example of sloppy terminology. A take­home message: unlike in eukaryotes, in bacteria there are no haploid (1n) gametes that fuse to form a (2n) zygote, which then undergoes meiosis (4n) including recombination during prophase I, and reductive division to finally yield a diploid pro-embryo. No sex among bac­teria. Period. Also on this list of sloppy or outright mis­leading terms: calling the plasmid responsible for con­ju­gation 'F' (fertility factor), and F-carrying cells 'male' be­cause they form (phallic-shaped) F-pili that extend from the cells for some 1.2 µm, mostly one per cell. So, how does conjugation work then? The F plasmid contains all the genes required for conjugation: for mediating the contact between donor and recipient cells, and for re­gu­la­tion of DNA mobilization and its unidirectional transfer. Occasionally though, the F plasmid integrates into the chromosome of the host cell, giving rise to an Hfr (high frequency of recombination) strain. Strictly speaking, the chromosome of the host bacterium is integrated into the F plasmid in Hfr strains, and chromosomal genes of a Hfr bacterium can then be mobilized and transferred to a recipient along the F pathway (Fig. 2). Would it not be attractive to visualize DNA transfer of a Hfr donor strain to recipient cells, and recombination in the recipient at the level of individual living cells, by means of fluorescence microscopy in real time? And to follow the fate of the newly acquired DNA in individual recipient cells through several cell divisions? The Radman lab devised an experimental system to ad­dress these questions. As donor for Hfr conjugations, they constructed a dam+ tetR mrfp1 strain, in which all chromosomal DNA would be fully methylated at GATC sites by Dam methyltransferase, usually indicated as GmATC. All cells then have a reddish hue under UV in fluorescence microscopy due to low-level expression of the red-fluorescent protein Rfp1. The essentially isogenic recipient strain is a dam– mutant, in which the chro­mo­so­mal DNA is completely unmethylated at GATC sites due to the absence of active Dam methyltransferase. This strain was "tagged", in addition, by a replacement of its native seqA+ gene by a seqA-yfp fusion gene expressing constitutively a SeqA-YFP fusion protein (yellow flu­o­res­cent protein), which gives a green color under UV. The E. coli SeqA protein binds poorly to single-stranded DNA, with low efficiency to methylated or unmethylated GATC sites, but with high ef­fi­cien­cy to hemi-methylated GATC sites (hemi = half, i.e., methylated on one strand only) and "brid­ges" closely spaced he­mi-me­thylated GATC sites by oligomerization. Since GATC sites are over-re­pre­sented in the genomes of dam+ bacteria – most Enterobacteriales, Vibrionales, and Pas­teur­el­la­les – groups of closely spaced GATC sites are found frequently along their chromosomes. He­mi-methylated GATC sites arise in dam+ strains after passage of a replication fork and persist on the new strand until it is (re-)methylated by Dam with a delay of 2 – 3 minutes for most chro­mo­so­mal loci. The SeqA-YFP fusion protein "decorates" the two replication forks in slowly growing dam+ cells with brightly fluorescent foci by oligomerizing at closely spaced hemi-methylated GATC sites (Fig. 3 A), while it appears evenly distributed over the entire nucleoid in dam– cells (Fig. 3 B). 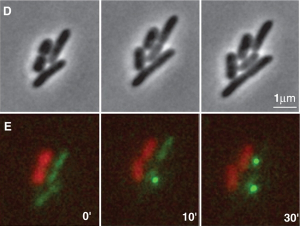 So what happens when cultures of both strains are mix­ed for conjugation? Within five minutes, the first bright green foci appear in recipient cells, and within 30 – 40 min virtually all recipient cells in close neighborhood to donor cells have one or more foci (Fig. 4). Apparently, conjugation is a highly efficient process. Any incoming dam+ ssDNA from the donor is immediately converted to dsDNA by repair replication – think Okazaki fragments – but cannot be (re-)methylated in the dam– recipient. Thus the received DNA remains hemi-me­thy­lated and is sub­strate for binding of SeqA-YFP. As expected, no such SeqA-YFP foci were observed when a dam– donor was used for conjugation, which could not lead to hemi-me­thy­la­ted DNA in the recipient as it was unmethylated to begin with. Also, no foci were found in recipient cells when these were conjugated with traA mutant donors that are defective in pilus formation. Both obvious yet necessary controls. Single recipient cells could receive donor DNA more than once, since Babić et al. found well-separated foci arising at different time points at different positions in single cells over the time course of a conjugation experiment.

In interrupted-mating experiments, i.e., allowing for just one short 'window' for conjugation, the authors assessed the fate of the received DNA in the recipient with respect to recombination (see Fig. 2). They did this by monitoring the lifetime of SeqA-YFP foci in various genetic backgrounds. In a recA– background homologous recombination is not possible, and >90% of the foci were gra­du­al­ly lost during the first hour after mating. The received DNA was probably degraded by RecBCD, an enzyme that efficiently breaks down linear ssDNA, and dsDNA lacking end-protection. Ac­cor­dingly, SeqA-YFP foci were retained for more than 4 h in >97% of cells with a recA–recD– genetic background. Since SeqA-YFP foci were stable for more than 4 h in ~97% of recA+recBCD+ recipient cells the autors deduce in this case these foci were "rescued" from the received DNA by RecA-me­di­a­ted double-crossovers with the homologous region of the recipient chromosome. Therefore, not only is the conjugational transfer of DNA from the donor to the recipient highly efficient but also the recombinational "rescue" of received DNA by the recipient. It almost smells like a bacterial "gene drive". 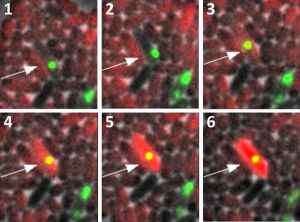 Figure 5. Time-lapse series of a conjugation ex­pe­ri­ment extracted as screenshots from movie S2, with a recipient cell indicated by an arrow. After formation of a bright SeqA-YFP focus on the transfered DNA (1 + 2), Rfp1 expression of the (initially) unrepressed mrfp1 gene re­sults in increasingly bright red fluorescence in this cell (3 – 6). Source

Babić et al. observed in their conjugation experiments not only the formation of SeqA-YFP foci shortly after ma­ting, and stability of these foci over prolongued times, but, in addition, a strong increase in red fluorescence approximately 2 h after mating in a small percentage of recipient cells (~8%) (Fig. 5). These cells had apparently received a longer stretch of donor DNA that contained the tetR mrfp1 markers. Once converted to dsDNA – and likely its recombination-mediated integration into the recipient genome, see above – the mrfp1 gene on the received DNA would be fully expressed, and repressed later only after sufficient synthesis of the TetR repressor. Thus the bright fluorescence of these cells, in contrast to the low level of red fluorescence in the donor cells that express the tetR repressor gene constitutively (Figs. 4 and 5). It is not surprising that the number of such high-level Rfp1 expressing cells was low because DNA transfer during conjugation can not only be physically interrupted by vigorously shaking mating cultures (sorry, sloppy terminology again) but cessation of transfer also occurs randomly due to breaks in the rather sensitive single-stranded DNA molecules during trasfer. It is known from clas­si­cal experiments that the successful transfer of a donor gene to the recipient crucially de­pends on the distance of the gene in question to the origin of transfer (oriT) within the (integrated) F plasmid of the donor genome.

The Radman lab demonstrated in this study the physical transfer of DNA from the donor to the recipient and, in addition, the expression of a horizontally transferred gene in the recipient di­rect­ly, i.e., without relying on selective techniques. One can hardly come closer to watching con­ju­ga­tion happen. I will come back again in more detail to the above half-sentence "visualize ...re­com­bi­na­tion in the recipient at the level of individual living cells" in a future post.