A towering figure in microbiology, our friend Fred Neidhardt died on October 7, 2016 at his re­tire­ment home, the Academy Village near Tucson AZ. He made fundamental and abiding con­tri­bu­tions to research, teaching, academic administration, and social issues. In each, he left deep-root­ed marks that made him greatly respected and highly beloved. 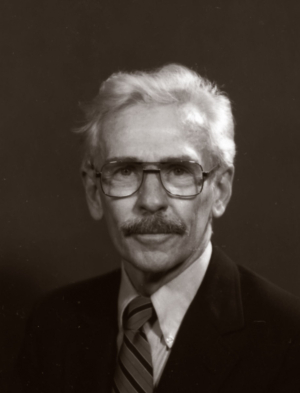 His academic life began at Kenyon College, which he at­tended on a scholarship he received as a not-particularly advantaged kid from Philadelphia. He had a great love and appreciation for his al­ma mater, which conferred on him an honorary doctorate (one of three, the other two from Pur­due and Umeå, Sweden). He got his Ph.D. from Harvard with Boris Magasanik and did post­doc­to­ral work in Paris with Jacques Monod. He held faculty positions at Harvard, Purdue, and Michigan, where he eventually ser­ved as chair of Microbiology and Vice President for Re­search (when in this post, one of us asked him what his budget was. He replied: "One billion dollars." "And your 'dis­pos­able budget'?" "Ten thousand dollars!" ). Fred ser­ved as president of the ASM and the Waksman Foun­da­tion for Microbiology, and on numerous government and private advisory and editorial boards. His honors in­clud­ed fellowship in the American Academy of Arts and Sci­en­ces, the Ame­ri­can Aca­de­my of Microbiology and many others in this country and abroad.

Fred took the lead in the development of bacterial growth physiology. He explained: "Intrigued by growth as the unique property of living systems, I was captivated upon first observing, early on in graduate school, the speed, efficiency, and adaptability of the growth of bacterial cells such as Escherichia coli. I resolved to learn all I could about how cells grow, and to do so by exploring the physiology of bacteria." Accordingly, he made centrally important, often innovative, contributions to such phenomena as catabolite repression, the stringent response, and the patterns of response to stress. He pioneered in the development of critical methodologies. He was among the first to use conditional mutants to study essential processes in bacteria. He developed proteomics and is considered the father of this field. He designed a synthetic medium (MOPS) that allowed the study physiological properties of bacteria in a reproducible way.

In an attempt to centralize the knowledge of E. coli as the premier model system in Biology, he ini­tia­ted and became the editor-in-chief of what became known as the 'E. coli  bible,' a two-volume book called "Escherichia coli and Salmonella." An example of his precise and numbers-based ap­proach is his much-cited table of the composition of E. coli  found in this tome.

Based in part on his Quaker beliefs, Fred was actively engaged in issues ranging from equality for women (for which he received the first ASM’s Alice Evans award), to the status of minorities in aca­demia and elsewhere, to justice in the penal system, to treatment of immigrants.

The two of us wrote or co-edited five books with him (out of a total of eight to his name), so we knew each other well enough to be able at times to finish each other's sentences. We knew Fred from our early days in science. He spent a partial sabbatical in one our labs (JI). In the late 1950's, one of us (MS) was a direct competitor of his on two occasions. Once he published first, once MS did. Out of this came a deep and abiding friendship that lasted these many years. We will miss him. His wisdom, his insights, and above, all his kindness and concern for his fellow humans. He was a mensch.

Fred is survived by three children, Rick, Jane, Marc, and three grandchildren, Mia, Caitlin, and Mag­gie. In lieu of flowers, donations in Fred's name can be made to the American Friends Service Com­mittee or the Leelanau Conservancy.