« A Sweater and a Shirt Came Before Just a Shirt | Main | Cyanophages: Maximizing the Photo– and Redirecting the –Synthesis » In an attempt to preserve and defend the good name of the salmon fished in his state, Senator Warren Magnuson (D-WA), introduced in 1967 a bill in the US Senate pro­po­sing to change the name of Salmonella  to the more in­oc­cu­ous sounding Sanella. In some circles it may seem com­for­ting to think that taxonomic terms can be changed by an act of Congress. Who knows, that could come in han­dy someday.

The ASM responded to the Magnuson bill rather force­ful­ly. Below is part of a letter written by the chair of the ASM Taxonomy Committee, William A. Clark.

I am reminded of a previous attempt at legislating sci­ence. In 1897, the Indiana State Legislature considered a bill to change the value of Pi to a more manageable num­ber, 3.20 to be exact. The bill was entitled "A Bill for an act introducing a new mathematical truth and offered as a con­tri­bu­tion to education to be used only by the State of Indiana free of cost by paying any royalties what­ever on the same, provided it is accepted and adopted by the official action of the Legislature of 1897". The bill passed the state House but was rejected by the state Senate. Read its pic­turesque history here. 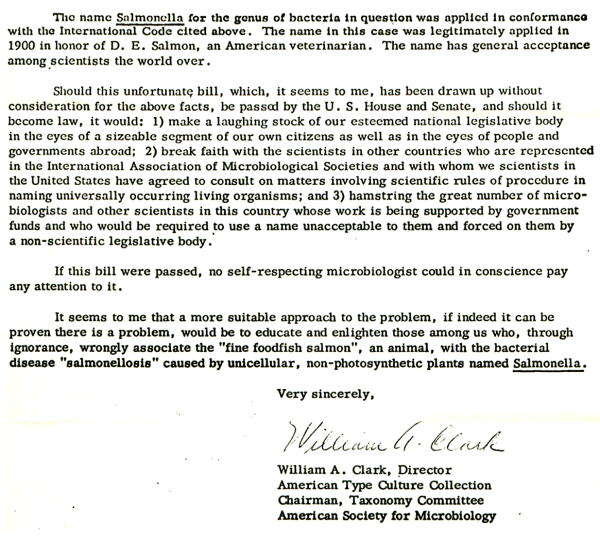 I thank Jeff Karr, the ASM archivist, for kindly calling my attention to the Magnuson bill. Note that in 1969, the ASM Taxonomic Committee considered Salmonella a "unicellular, non-photosynthetic plant" (last sentence).