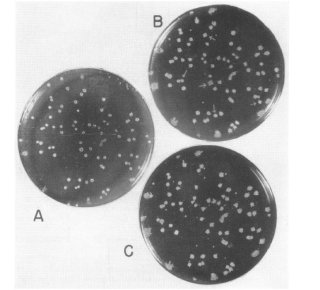 In the early stages of modern molecular genetics, say 1942 ‒ 1952, the time came to settle experimentally the old question about whether mutations in bacteria arise spontaneously or are induced by the environment. Call this Mendelian vs. Lamarckian evolution. By then, the spontaneous occurrence was generally favored, being confirmed by several pieces of work such as the classic fluctuation test of Luria and Delbrück. Other clever experiments added credence to this conclusion. However, they were all open to the objection that the mutants arose after contact with the selective condition, such as exposure to antibiotics or phages. How can one test whether the mutants were present without exposing the bacteria to the selective condition? Not easy to figure out, but that's precisely what geneticists Joshua and Esther Lederberg did. For a bit of history of the two, see here.

Here's the idea: Grow your bacteria so that they produce isolated colonies on an agar plate. Call this the "master plate." Now make a replica of it by touching the surface of the agar with a suitable material. The Lederbergs chose velveteen, which because its fuzz acts like having a myriad of inoculating needles. Now touch the velveteen on two new plates, one containing a selective agent (e.g., an antibiotic), the other not. Incubate. The plate with the antibiotic will have colonies of resistant mutants. Yes, they will have been exposed to the agent, but those on the sister plate will not. With a little triangulation, look at the sister plate and pick the colonies that correspond to the ones growing on the "selective" plate. These will be resistant without having previously been exposed to the agent (there's a really nice tutorial on YouTube).

You want to pick nits? Argue that the mutants will eventually have to be tested in the presence of the selective agent. True, but practically none of the other colonies on the second plate will be resistant. Want to be extra-modern? Instead of measuring resistance to the antibiotic, grow the resistant colonies in its absence and measure their level of an enzyme known to be involve in resistance (e. g., a beta-lactamase if you had used a beta-lactam antibiotic). One can also employ a number of other selective conditions, e. g, resistance to a phage or loss of ability to grow on a minimal medium (auxotrophic mutants).

This elegant brainchild went a long way towards quelling the heat of the discussion. The choice seemed clear: mutants arise spontaneously and not due to exposure to the selective agent. And so the debate rested for a couple of decades, only to be revived by newer and rather controversial notions, such as that epigenetic phenomena lead to Lamarckian evolution. For a discussion of current views of this question, see here. So, there you have it, some arguments seem never to cease. But the elegance of the Lederbergs' contribution remains for all to admire.